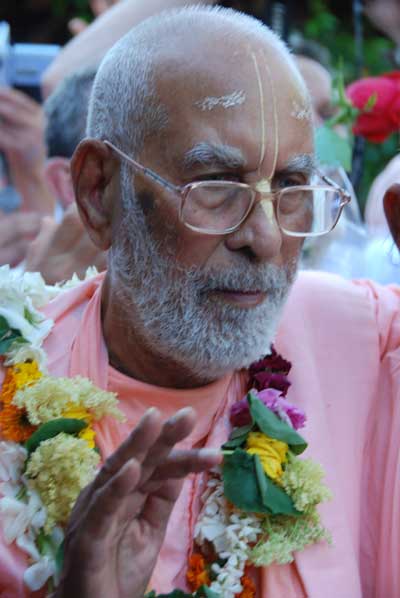 Srila Bhaktivedanta Narayana Gosvami Maharaja and his party arrived around noon, on June 10th, at the beautiful mountainous village of Badger near the Sequoia Mountains. Several hundred very eager devotees enthusiastically sang kirtana for over thirty minutes prior to his arrival – all in great anticipation of seeing him after so long. By the weekend, over eight hundred devotees and guests were present. 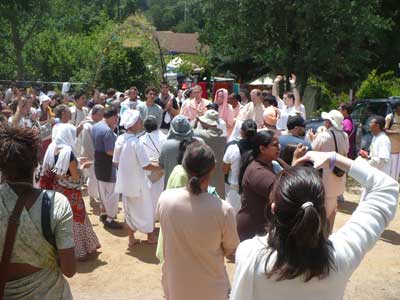 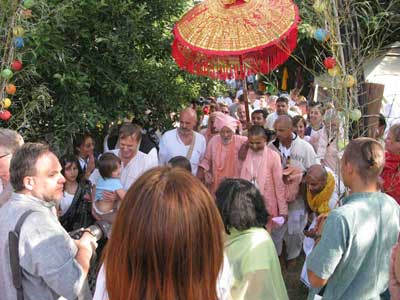 "Before the appearance of Srila Bhaktivinoda Thakura and Srila Bhaktisiddhanta Sarasvati Thakura Prabhupada, no one had come from India to preach in the West. In fact, going outside of India was considered to be like a sin, because, among other things, of the uncertainty of being able to take proper prasadam. But Srila Bhaktivinoda Thakura and Srila Prabhupada Bhaktisiddhanta Sarasvati Thakura broke this barrier. Srila Sarasvati Thakura declared, "We will utilize the development of Western science, like airplanes and other things. We will travel around the entire world and distribute the mission of Sri Caitanya Mahaprabhu.

"So we are now traveling throughout the world. I think that Srila Bhaktivedanta Svami Maharaja had less time than I have. My age is now ninety-one, and still I am travelling to the Western countries. The doctors are telling me, "Don't go outside of India," but I think that when the installation of the Deities in our completed Houston temple takes place, I must be there.

"I have come to distribute the knowledge that we have received from our guru-parampara. What is that knowledge? You have not come directly from the Supreme Lord. You have not come directly from Goloka Vrndavana or Vaikuntha. You have come from the marginal point, the point between the material and spiritual worlds, where there is neither the world of maya nor the world of Vaikuntha. You have come from the light emanating from the forehead of Karanodakasayai Visnu, who, although it is said resides in an ocean, it is not an ocean as we know it; He resides at the marginal point. That marginal point is very fine, like the ever-changing shoreline of an ocean or a river, going in and out. If, from that point or that line, you look towards this world, a tendency for sense enjoyment enters your heart and you come to this world. On the other hand, when you look from there towards Vaikuntha or Goloka Vrndavana, at once you are liberated and go to those realms."

Then, as the assembled devotees watched Srila Maharaja as he sat on his vyasasana in the New Vraja pandal, many devotees sensed that due to his ecstatic trance of Krsna consciousness, for some minutes it was difficult for him to continue speaking a steady stream of English words. He continued, "Here, Krsna...what? This is my disease now. In this age it is difficult to remember." The devotees didn't believe that this was the cause – but rather the pull of his internal absorption in the pastimes of the spiritual world. [To read Srila Maharaja's lectures on the origins and destinations of the living entity, you can download them from www.purebhakti.com. You can also download the book, "Journey of the Soul." To hear and see videos of all the lectures and other events of this Badger festival, please log on to www.purebhakti.tv.]

He continued, "According to the fruits of the living entities' karma there are so many varieties of species of life; this human life is very rare." He then quoted the following verse and explained it with intense compassion.

["Human life is obtained after many, many births, and though it is temporary, it offers the highest benefits. Thus a sober and intelligent man should immediately try to fulfill his mission and attain the highest profit in life before another death occurs. He should avoid sense gratification, which is available in all circumstances." (Srimad-Bhagavatam, 11.9.29)] 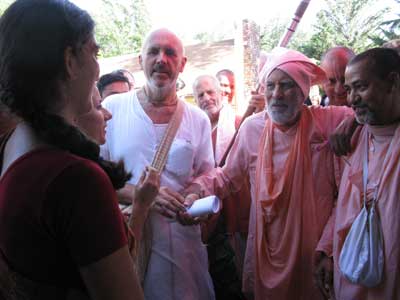 On that first evening, on the way to class, Srila Maharaja passed by the book table and stopped to talk to Radha dasi and Gopika dasi, who were both responsible for the table. Radha dasi told him that there were more books at this festival than in previous years, and he responded by saying that they should all be distributed.

Then, on the second evening, at the beginning of his class, he requested Radha dasi to give a presentation about the books, after which he told everyone present, "Book distribution is one of the main contributing factors of preaching. I think that the reason that Parama-pujyapada Srila Bhaktivedanta Svami Maharaja was able to preach all over the world in just a couple of years was his books. Just as his disciples distributed his books during his manifested stay in this world, I want my disciples to distribute my books. He very quickly preached through his books. Similarly, I have written not less than one-hundred books, and so many translations are coming. I want these books to go door-to-door.

"I request you all: There is a small book stall here. Within two days, there should be no books left. All books should be taken and preached everywhere. There are also calendars and the posters of Syamarani, and so many things to collect." 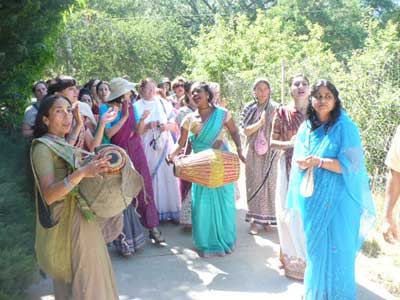 The Govardhana Annakuta Festival was held on June 12th. Hundreds of devotees cooked over a thousand delicious preparations to be offered to Giriraja Govardhana. Beginning at about 10am, a big harinama kirtana resounded around the six-acre New Vraja (Badger) property; and Srila Maharaja excited all the enthused chanters by walking within the harinama parties – first with the men's party and then with the ladies' party. 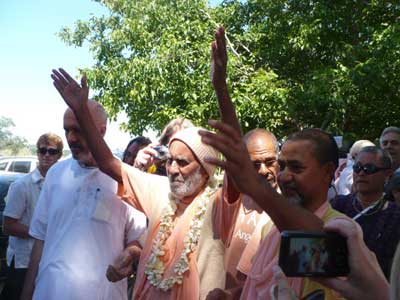 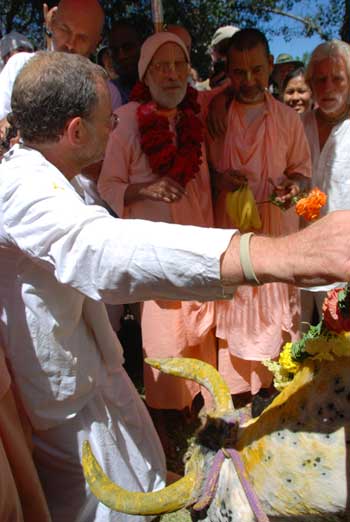 Worshipping a cow prior to worshipping Giriraja Govadhana 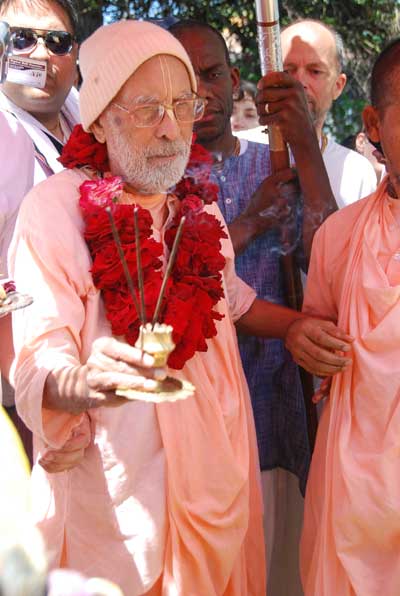 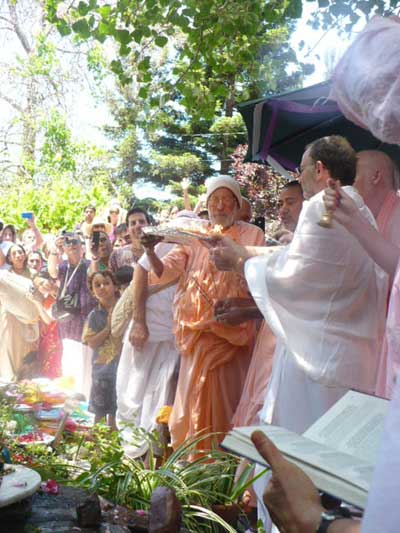 Fourteen years ago, Srila Maharaja installed Giriraja Govardhana, calling Govardhana from Lord Krsna's abode in Goloka Vrndavana to New Vraja. Ever since that time, each year of his visit there, he has arranged for a Govardhana Annakuta festival.

This year, as usual, after arranging for each of the devotees and guests to carry a plate of different food preparations on their heads as they chanted and danced to the beautifully decorated Govardhana Hill, he led them in Govardhana's worship ceremony.

That evening during class, he told his joyful audience, "Today I am very happy, because over one-thousand preparations were offered to Giriraja Govardhana. It is written in our scriptures regarding those who have given something and those who have prepared something – even one grain – for offering to Govardhana; even Laksmi may have to beg, but that devotee will never have to beg. There are so many ladies here who spent the entire night cooking and preparing all of these preparations, and my dear sons have also helped.

"So I think that this festival is successful. Those who have performed parikrama of Govardhana, go-puja (cow worship), and worship of Govardhana will not have to beg in any generation.

"Now, I would like that different speakers should tell how Giriraja came to Vrndavana."

Srila Maharaja then called on several speakers to tell the history and pastimes of Giriraja Govardhana. 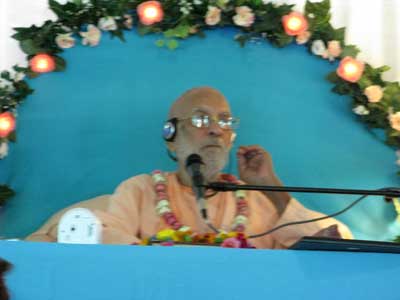 His main topic for the week-long hari-katha festival was Krsna's leaving Vrndavana; the subsequent deep feelings of separation between Krsna and the Vrajavasis; and His sending His dear friend Uddhava to Vrndavana in order to console the Vrajavasis, and especially the gopis.

In the final evening's class, which was the final class of his fourteen years of visits to New Vraja, Srila Maharaja continued to share with his audience the universally purifying news of the Vrajavasis' separation moods. He said, "Uddhava lived among the gopis for three months. He went with them to Nandagaon, Varsana, Govardhana, Ter-kadamba and other pastime places, pacifying them with Krsna's messages, and the gopis told Uddhava the hari-katha of each place, while weeping.

After three months Uddhava told the Vrajavasis, "O Nanda Baba, O Mother Yasoda, O residents of Vrndavana, now I want to go to Mathura to tell Krsna all this hari-katha and what I saw." But the gopis warned him, "Don't tell all this katha to Krsna in one day. Otherwise His heart, which is very soft, will be broken. Tell Him a little bit at a time."

When Uddhava was on the chariot getting ready to return to Mathura, Nanda Baba came to him with many things. He was holding the utensils that Krsna used to use – Krsna's flute, His ornaments, and His belongings, and gave them to Uddhava. He said, "Uddhava, what is the use of keeping all these things here? We know that Krsna will not come, so take them and give them to Krsna; He should keep them." Weeping, he spoke this out of His separation mood. [To hear the rest of this lecture, as well as the other lectures Srila Maharaja gave in Badger, New Vraja, please visit  www.purebhakti.tv.] 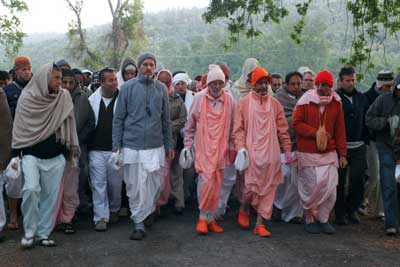 Srila Maharaja went for a half-hour morning walk every day, just before 6am. He also gave darsanas throughout the day, answering questions, giving direction regarding devotees' various services, giving babies their first grains, and mercifully giving harinama and diksa initiations to over ninety fortunate souls.