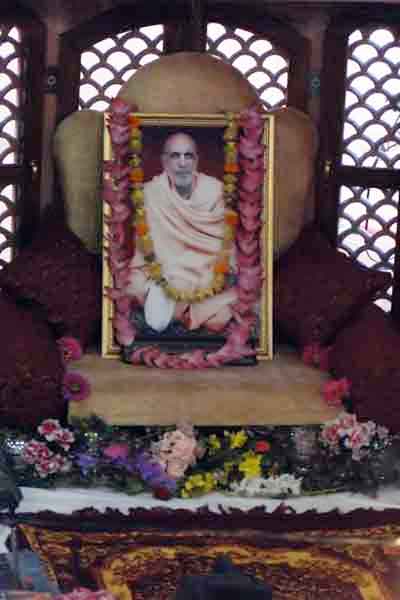 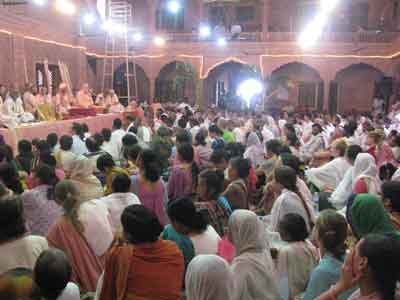 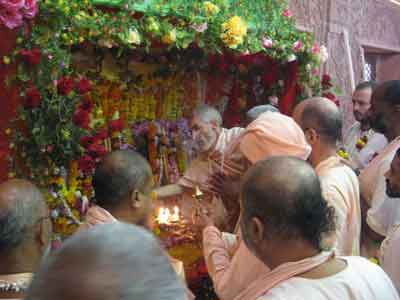 The assembled devotees performed the worship and arati in honor of Parama-gurudeva, and then the parikrama party proceeded to the Yamuna for sankalpa (taking vows). 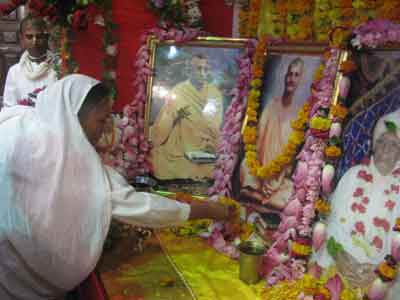 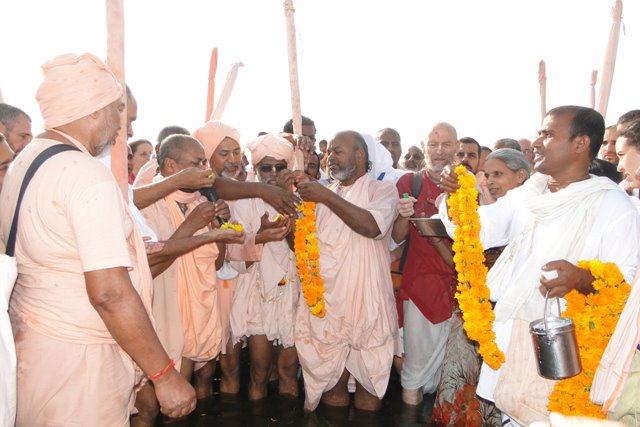 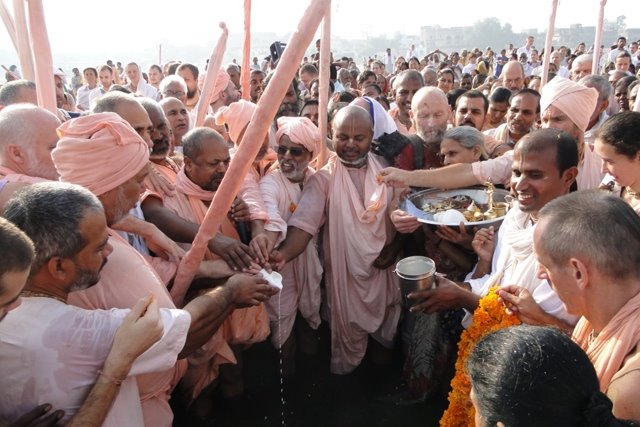 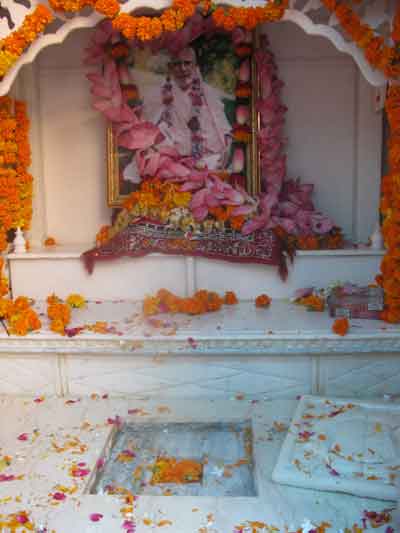 The puspa samadhi of Srila Gurudeva. A flower garland that he wore was placed in this square and then covered. 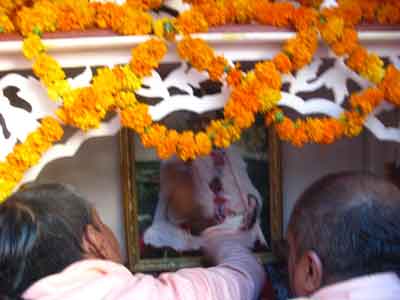 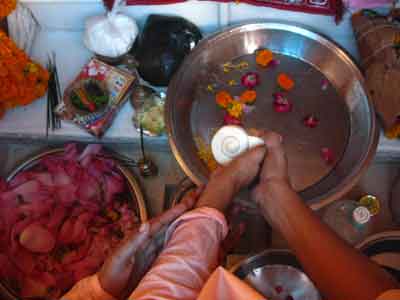 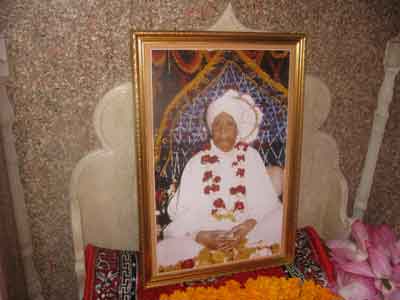 A puspa samadhi was also made for Srila Bhaktivedanta Vamana Gosvami Maharaja, and the same ceremony was performed for him after the ceremony for Srila Gurudeva. 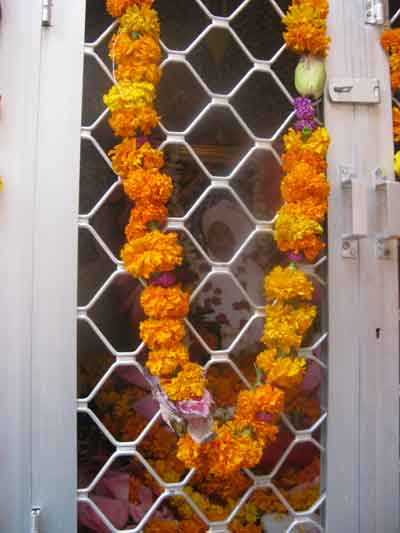 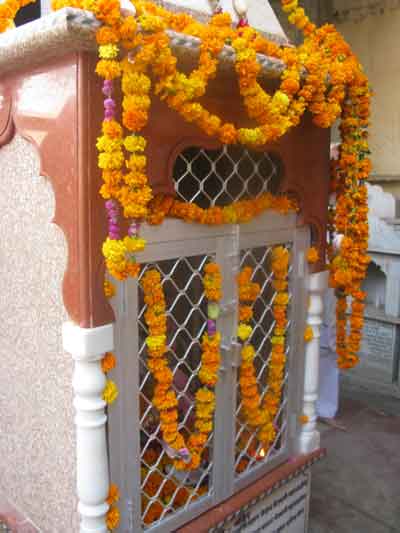 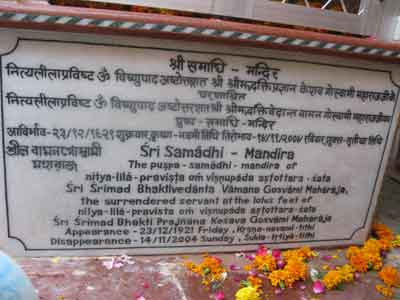 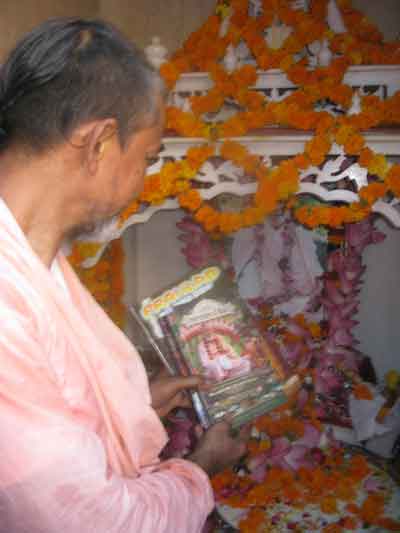 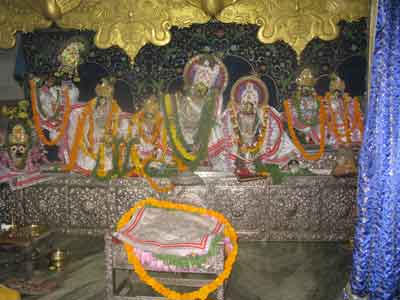 Sri Sri Radha DamodaraThis year, 2011, the annual Vraja Mandala Parikrama began on October 11th, under the divine guidance of nitya-lila pravista om visnupada astotara-sata Sri Srimad Bhaktivedanta Narayana Gosvami Maharaja. At first there was some apprehension in many devotees' hearts regarding exactly how this parikrama would take place – the first year without the manifest presence of our beloved Srila Gurudeva – but then they became peaceful and joyous with the experience that Srila Gurudeva is as present as ever.Srila Gurudeva has been leading Vraja Mandala parikrama for 60 years, and has expertly trained his sannyasis and other disciples how to observe the month of Kartika for 30 consecutive days – attending mangala-arati; singing bhajanas; and especially Sri Damodarastakam, every morning and evening; attending hari-katha; and going to all the holy pastime places. By his exorbitant mercy, this parikrama is being followed in the same mood and style as Srila Gurudeva has performed it over so many years, just as his own Guru Maharaja has done.

On the first day of Kartik, Sripad Tirtha Maharaja, Sripad Madhava Maharaja, and Sripad Padmanabha Maharaja spoke in the morning about how Srila Gurudeva has done parikrama over the years, and begged his mercy to lead us all in this year's parikrama. They also touched on the glories of Parama-gurudeva, Srila Bhakti Prajnana Kesava Maharaja. Sripad Padmanabha Maharaja shared how Srila Gurudeva was so immersed in divine separation from his Gurudeva that on this day he could not pronounce his pranama mantra without weeping.

After the sankalpa, the parikrama party proceeded to Sri Radha-Damodara temple, where a puspa samadhi was constructed for Srila Gurudeva by the deep desire of Dvija Krsna dasa, Sripad Sridhar Maharaja and Jagganath Punja from Fiji. Jagganath Punja kindly funded the site for Srila Gurudeva's Samadhi, and Sripad Sridhar Maharaja and Dvija Krsna dasa made all the arrangements. The puspa samadhi spot is directly across from the samadhi of Srila Jiva Gosvami. Srila Krsnadasa Kaviraja Gosvami's samadhi is also next to Srila Jiva Gosvami.

[It was impossible to fit 500 devotees into such a small spot, yet I did my best to get some pictures of the installation]

Six new English books were printed for this Kartika, three in Spanish, and one in Hindi as well as the Bhagavat Patrika, and nine books were reprinted with beautiful embellishments. Two reprints were ready on the first day, along with one new booklet of Srila Gurudeva's autobiography as well as a Prahlad coloring book. The devotees who worked on them, along with Sripad Madhava Maharaja, offered them all to Srila Gurudeva at his puspa samadhi.

All classes are being videoed by Govinda-priya dasi and uploaded to www.purebhakti.tv daily