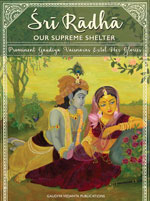 Who is Śrī Rādhā? She is the tender, divine counterpart of the Supreme Personality, Śrī Kṛṣṇa. She is the personification of His potency, specifically His potency of bliss, and She kindly bestows that transcendental bliss upon anyone who takes shelter of Her. This has been fully realized by stalwart practitioners of bhakti, such as the exalted authors of the articles herein. It is their sincere desire to see others relish substantial, never-diminishing happiness, the path to which they skillfully reveal in Śrī Rādhā: Our Supreme Shelter.