The Cows Of Krishna 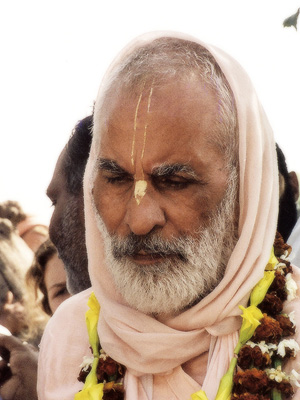 [Srila Bhaktivedanta Narayana Maharaja observed a 24" decorative wooden iguana lizard on the floor of the house (which was there when the devotees had first bought the house). He requested the devotees living there to take it out, because that animal was envious and poisonous.]

[Srila Narayana Maharaja:] A cow is so much better! Why?

[Syamadasa dasa:] Because they are beneficial for human society.

[Vanamali dasa:] They give milk. They offer their milk and themselves to Krishna.

[Srila Narayana Maharaja:] Why? You should think. Can anyone explain?

[Devotee:] They are in the mode of goodness.

[Rukmavati dasi:] When Krishna strokes the cows, He is thinking of the gopis.

[Syamarani dasi:] Because they are beneficial for Krishna. They enable Him to meet Srimati Radharani in the forest. They give Him an excuse to go out into the forest. When Krishna comes back at night, the dust of the cows gets on His hair and face. This makes Him look so beautiful, that the gopis become more attracted to Him. So the cows are beneficial to Krishna.

[Syamarani dasi:] No, he will not do.

[Brajanatha dasa:] Horses can also do. They can run, and dust comes.

[Srila Narayana Maharaja:] The horses can come like Kesi. Cows always give milk. They have no dvesa, envy. They do not only support themselves. Their life is always for others, and especially for Krishna, for all the Vrajavasis and for the whole world. If anyone is saranagata, surrendered to Krishna, and is always engaged for the welfare of the whole world, not caring for their own life-then Krishna has to manage them. He also supports the cows, and nourishes them, always following them when they go grazing during His sweet pastimes. With cows He does all this. Without cowherding, how will all these pastimes manifest?

[Navina Krishna dasa:]There will be no scope to go there.

[Srila Narayana Maharaja:] Due to their very affectionate loving quality they are always like 'mother'- giving milk to all, regardless of whether they are Hindus, Muslims, Christians, or Buddhists. They give milk to everyone. Even serpents come to take milk from the cows. So if we want krsna prema-love and affection for Krishna-then we should try to follow the example of the cows. That lizard we saw in the house of Devendranatha was very big.

[Devotee:] They may give poison …

[Srila Narayana Maharaja:] Cows have no poison…never. You should try to keep those things, animals and persons which are favorable to bhakti. (Gurudeva then looked at the large fish tank to his right.) These fish are very lusty. Always in lust. Hens, goats, cocks, hogs and pigs are very lusty. In India, high-class brahmanas, ksatriyas and vaisyas do not keep them. Only Muslims and very low-class people can keep all these things - goats and lizards. And devotees should keep what?

[Srila Narayana Maharaja:] You can keep anything that is favourable for your bhakti. Give up all things, even qualities, that are not favourable for Krishna..

[Srila Narayana Maharaja:] What did you say just now? We always see the difference?

[Srila Narayana Maharaja:] No! We see that Dvarakadhisa is in Krishna. There is no difference...

[Syamarani dasi:] But when Dvarakadhisa Krishna is feeling separation from Vrindavana, then He is really Vrajendra-nandana Krishna?

[Srila Narayana Maharaja:] But where is the peacock feather? And where is the flute? And how is Dvarakadhisa the son of Nanda Baba? Somewhat. He is partly Vrajendra-nandana…

[Srila Narayana Maharaja:] Why is Krishna not dying?

[Syamarani dasi:] Out of separation?

[Srila Narayana Maharaja:] Why is Dvarakadhisa not coming to Vrindavana? Who is stopping Him? So He is part, a fraction only. Krishna's fraction. OK? I am happy to come here, because this is the department of Radharani.

[Many of the ladies from different countries who were visiting Gurudeva in Australia were staying at Vanamali Prabhu and Hari Priya didi's house.]

[Syamarani dasi:] This morning in class, you were saying that those sadhana-siddha gopis whose kasayas where burnt up arrived at the rasa-sthali first, and the nitya-siddhas reached there after them.

[Srila Narayana Maharaja:] This is because they left everything. They were feeling so much separation. By the power of that separation, all their kasayas (worldly-like auspiciousness and inauspiciousness), which acted as obstacles or impediments to meeting Krishna in Rasa, were at once burnt, and like the wind they went there.

[Atri dasa:] Was it by mood, or in their spiritual form?

[Syamarani dasi:] They were already in their spiritual bodies. Right?

[Srila Narayana Maharaja:] Yes! They were in their spiritual bodies.They passed all their sadhanas in previous lives. They also had their gopi face and form. They took birth from the wombs of gopis. It is all right up to this point. But something was lacking. What was lacking? They were sadhana siddha; not nitya siddha. So they had husbands, and there was some love and affection between them. They had some children also. And after that, they heard of and saw Krishna. After their marriage, after they begot their children, they saw Krishna; and then they become so much attached to Him. But still they had some love and affection for their husbands and children. Anyone who has affection for husband and children, and they have met together, although they may have love for Krishna, they cannot come to Rasa. They cannot serve Krishna. It is rasabhasa - a semblance of rasa and opposed to rasa, so Krishna cannot allow them to come.

They could see Krishna, they could hear His flute, but they could not meet Krishna in Rasa, as the nitya-siddhas easily do. They were running towards Krishna, following the direction from where the flute voice was coming. But when they began to go, their husbands stopped them. Why? Yogamaya did it. She said, "You have children, you will have to burn your motherly mood". We have to give up the conception that, 'I am wife'. We have not to forget it, but we have to burn it. So Yogamaya, by trick, stopped them, and they did as we have discussed. This is a very high class of siddhanta. You should chant, remember, and pray to Krishna, and then you can realize something.

[Syamarani dasi:] So the the nitya-siddha gopis came behind them to meet with Krishna that day?

[Srila Narayana Maharaja:] Why behind?

[Syamarani dasi:] Because you said that they came there first.

[Srila Narayana Maharaja:] None saw each other. All saw that, "I am the only one going [to Krishna]". There is no question of who is behind or who is in front.

In this world, if you say anything, maya will come and cover it somewhat. Our language is defective. So whatever you say, something will be lacking. You cannot tell anything fully, completely and clearly. If you tell anything, I will discover some lacking. So this question will not arise. How many families are living in this area?

[Srila Narayana Maharaja:] You should try to be loving to all-not quarrelling-and with some affectionate mood. Try to chant and remember, doing kirtana and hearing. Try to gather more flowers, so that we can offer them to Krishna and Radha. Understand 'More flowers'?

[Srila Narayana Maharaja:] You have in your garden so many kinds of flowers.