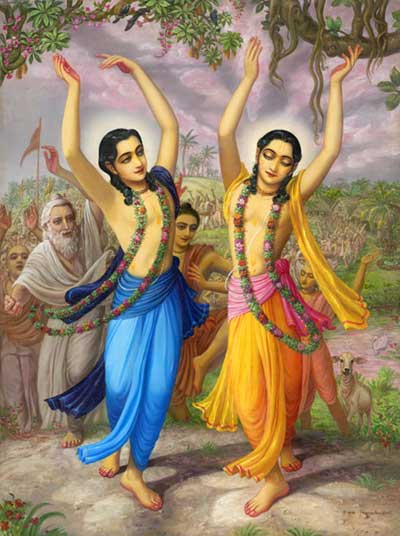 [At eleven o'clock this morning there was an abhisekha for Gaura-Nitai. As all the devotees gathered around…]

Srila Gurudeva: In India, that place where Ramacandra, Sita and Laksmana could not go. That land is called Radhesdesa. The same land, everywhere Ramacandra went in India, South and North, East, West, but not there. But to that very land Nityananda Prabhu came and He descended there and made it more than any place. Ekacara. Before Nityananda Prabhu five Pandavas with Kunti, mother Kunti, they were there. When they were given in fire by Duryodhana in lac ca greha.

Srila Gurudeva: Ah. But trickily by Vidhura they were saved, and in disguise they left that place. Duryodhana knew that, "Oh, all are burnt, now I am saved and I am monarch of all." But in disguise they went to Ekacakra, and there, there was a very big demon who wanted to take all for his dinner. The whole villagers suggested themselves that each day only one will go with some preparations. From then they began to go daily, only one person, so that this demons should not disturb others. When Kunti was with the five Pandavas in the house of the brahmana where they were staying. There were only one husband, only one wife and only one son. They began to weep "Who should go? If father is going everything, if mother is going everything, if son is going everything." So they decided that, "We three should go," and they were weeping bitterly. Mother Kunti went there and asked the reason why they were weeping. They began to tell this history of the demon that "We have promised to give one person each day with so many preparations." Today is our turn. So who will go and not go, we cannot decide, so we three will go.

Then mother Kunti told that, "I have 5 sons. No harm. You should not go. Oh, I will give of my own one son."

He told, "Never. Never. For me, you will give your son. Absurd. We cannot accept this."

So they made very happily so much preparations. And in a big basket Bhima took all and he went to that forest where that demon was. And when demon was seeing him, that he is coming, Bhima began to take with two hands all the preparations himself, and the demon became very angry. At once he jumped and attacked Bhima, but Bhima took any tree, uprooted it and [Maharaja moves hands like someone attacking with stick]. What became? So much fight between them. At last Bhima took the feet of that demon and threw him in the sky and died and the problem was solved forever. Then he came very happily took the foot-dust of mother Kunti. So this is story of Ekacakra.

So at this place, Ekacakra, Himself Nitai appeared. Hadai Pandit, name of His father Hadai ujja. Ujja, Pandit ujja. Ujja means brahmana knowing all the Vedas, sastras. Shubho magha masi, oh, this is very pure Magha masa, month of Magha. Very soon Vasanta-pacami has gone, so it is like Vasanta-ritu.

Srila Gurudeva: Sukla trayodasi is today. Janmila haladhara. Who is Haladhara [carrier of the plough]?

Srila Gurudeva: The weapon of Haladhara, the plough [hala], is of Baladeva Prabhu. Why Haladhara? He has hala and musala. If anyone is against Krishna or Krishna-bhakti or against the associates of Krishna, He brings them with hala.

Srila Gurudeva: Giving around the neck and putting. And with musala?

Srila Gurudeva: In this way He killed the monkey Dvivida who became against Baladeva Prabhu.

Srila Gurudeva: And thirdly from Karanodakasaya, tatastha-sakti, so many jivas like us, they have come from there. So anyhow all the jivas whether conditioned or mukta, liberated, all are coming, original root is this Baladeva Prabhu. So this is Haladhara. Also haladhara means to plough. What plough? Prema-bhakti, bhakti, and then bhakti become sraddha, nistha, ruci, asakti, bhava, prema, sneha, mana, pranaya, bhava, mahabhava and all. So this is coming from Baladeva Prabhu.

Hadai Pandit was very much happy, His mother was happy. Dharani-mandala, karaytalamal. And then His last fraction, Sesa, became very happy, and he was like dancing, so whole world was like shaking. So ananda nahika dharaya, there was no place to keep ananda. Everywhere anandam, manandam, purnanandam.

Santipura-natha, manaya harasit, kori kichu anuman. Advaita Acarya was thinking somewhat, "Oh, why today there is so much ananda. Oh, my superior Prabhu is coming." So he made a. Anuman means?

Srila Gurudeva: So he gazed that, "Oh, my Prabhu is coming."

Srila Gurudeva: Elder brother of Krishna. O elder brother has come, is coming, perhaps. Where? In Ekacakra gram, Himself is coming."

Vaisnavera mana, hoilaparasan. All vaisnavas, even in Navadvipa, here and there, all became very happy. Ananda sagaray bhasay, and then ocean of endless ananda was. What?

Madhava Maharaja: No. They are floating in the ocean of pleasure.

Srila Gurudeva: Everywhere, and all the vaisnavas were going up and down.

Devotee: [quietly from back] Surfing.

["The noble Nityananda Prabhu is never angry, for He is the personification of supreme transcendental bliss. Devoid of all false ego, Nitai wanders about the town. (Baladeva Prabhu and Laksmana get angry, but not Nityananda.) Going from door to door to the houses of the most fallen and wretched souls, He freely distributes the gift of the harinama maha-mantra. Holding a straw in his teeth, he exclaims to whomever he sees, 'You can purchase Me by worshiping Gaurahari!'" (Giti-guccha)]

He's telling to every door, every house, that, "Oh, you should once speak 'Gaurahari' and buy Me." Buy means?

Srila Gurudeva: "And purchase Me. I will give up Myself to you." He is so happy.

["Saying thus, Nityananda Prabhu rolls about on the ground, appearing like a golden mountain tumbling in the dust." (Giti-guccha)]

He was so beautiful, like gold, and very tall vigra, very beautiful. So chanting the name of Gaurahari, and He used to be faint, and rolling on the ground.

["Locana dasa says: That sinful person who has not experienced the awakening of affection for such an avatara as this simply comes and goes uselessly in the cycle of repeated birth and death." (Giti-guccha)]

Locana dasa Thakura is telling that those who have no affection and love for this avatara, this incarnation of Krishna, oh, sei papi. Papi means?

Srila Gurudeva: Sinful person. Only going and coming, never they will be liberated.

[Srila Gurudeva says something in Hindi to Madhava Maharaja, who mentions various phrases from different songs. Then Srila Gurudeva refers to another song of Locan dasa Thakura 'Nitai guna mani']:

Mahaprabhu brought what? An endless vanya. Vanya you know?

["Without discriminating, Nityananda Prabhu freely offered this rare prema, which is difficult for Lord Brahma to attain, to all, even to the fallen and wretched who did not desire it (no one could avoid it!). The ocean of mercy had formerly been sealed tight, but Nitai cut a channel in its boundary wall and went from house to house with this nectarean prema, sweetly telling all to take harinama." (Giti-guccha)]

The love of Radha and Krishna conjugal, the mouth of that endless river, Nityananda Prabhu cut the dam, and so everywhere prema, prema, prema in Braja dharma. It was kept, reserved.

Srila Gurudeva: It was not even accessible for Brahma, Sankara, but He opened for all general persons. Ghare ghare bule prema-amiyar ban. That love and affection went door-to-door to all persons, to everyone.

["Locana dasa says: Whoever has not worshiped my Nitai, or who has heard yet does not follow Nitai's instructions, knowingly commits suicide." (Giti-guccha)]

Also anyone has told that, "Oh, I was not at that time. I want to die and to come on the same time there. I want to have a janma [when Nityananda Prabhu is there]." And Locan Thakura is telling, "Oh, if not doing bhajana of such a Nityananda Prabhu, janiya suniya sei atma-ghati hoilo, that person is what? Self?

[Devotees start a very enthusiastic kirtana and Srila Gurudeva encourages all to dance.]