Without Radharani, Krishna Is Zero 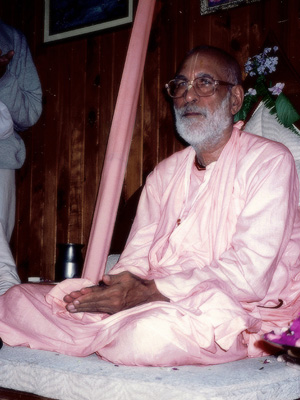 [Devotee:] Yesterday you quoted your Guru Maharaja saying that without Radharani, Krsna is zero; He's nirvisesa-brahma. We've heard that so many times from you also.* [see extra notes below] Parampujyapada Srila Vaman Maharaja also wrote that, and a translation of his article was printed in the last Harmonist magazine. But in Jaiva Dharma it says that Krsna has something that's not the work of sakti; His sva-tantrata and His sva-icchamayita. He has independence and free will or desire. You said that I should show it to you.

"Babaji: '.I agree that Krsna's name, form, qualities, and pastimes all indicate the function of sakti. However, freedom (sva-tantrata) and free will (sva-icchamayata) are not the work of sakti; they are both intrinsic qualities of the Supreme Person, and Krsna is that Supreme Person who has free will and is the abode of sakti. Sakti is the enjoyed and Krsna is the enjoyer; sakti is dependent but Krsna is independent; sakti surrounds that independent Supreme Person on all sides, but He is always conscious of sakti.']

[Srila Narayana Maharaja:] Not the English. Bring the Hindi.

[Srila Narayana Maharaja:] Yes, it is written there that without sakti He is like zero. Here it is written that without the help of sakti, a baddha-jiva (conditioned soul) cannot have any idea of that sakti. When a person will love Him, when he will have rati or bhava, then he can understand something.

[Devotee:] When you say that without sakti.

[Srila Narayana Maharaja:] This is the thing. Even though Krsna is there, if there is no potency, then He will be cipher, zero. He will be nirvisesa-brahma.

[Devotee:] Then why does Jaiva Dharma say that Krsna has free will that's not the work of sakti?

[Srila Narayana Maharaja:] Even though Krsna has freedom and desire, the baddha-jiva will see Him as nirvisesa. Visesa means that He has qualities, shape, form and other things, but these are coming from sakti.

[Devotee:] It says here, "Even though Krsna is separate from sakti, He is savisesa."

[Devotee:] Anugatya (being under the guidance of the guru-parampara)?

[Srila Narayana Maharaja:] Guru-parampara amnaya. Use amnaya. Don't use your own intelligence. Try to realize what is amnaya (the teachings of the Vedas received through guru-parampara).

[Devotee:] Can Krsna desire without His sakti? Does He have the power to desire?

[Srila Narayana Maharaja:] He can desire, but this is the thing: Desire has no shape, no qualities; nothing. So it beyond sakti.

[* Extra notes -
One of the many interesting examples took place on Vraja Mandala parikrama in 1993:
Devotee: You say that without Radharani, Krsna is nirvisesa-brahma; but Krsna has his own form without Her help, doesn't He?
Srila Narayana Maharaja: A stone has form, but it has no qualities.]