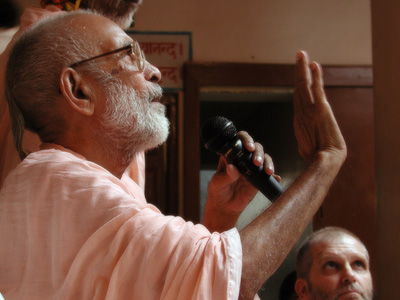 [Srila Narayana Maharaja refers to book distribution as 'love distribution'. Distribution of the transcendental books of Srila Prabhupada was begun by Prabhupada himself, and it developed and reached great heights by the combined mercy of Prabhupada and the guru-parampara, as well as by the sincere efforts of Prabhupada's disciples. In the course of time, however, due to our ever-increasing emphasis on money-making and fame in the name of that service, interest in book distribution gradually and considerably waned. Now, with a desire to not have the baby thrown out with the bath water, and by inspiring devotees to hurry that dirty bath water down the drain, Srila Maharaja has been encouraging devotees to distribute books, Prabhupada's and his own, with new enthusiasm. The following are transcriptions of some of his recent requests in the above regard. - Ed.]

Srila Swami Maharaja inspired me to go to Western and Eastern countries to preach the same mission that he preached, and I am happy that by his mercy and the mercy of my diksa-guru, Srila Bhaktiprajnana Kesava Gosvami Maharaja, I am doing so. Srila Swami Maharaja preached everywhere by his books. The words we speak in classes may disappear into the sky, but what is written as a document, in books like Caitanya-caritamrta, Srimad-Bhagavatam, and the books of the Gosvamis, will remain forever. Those words will help for millions of years.

When we were here in Hawaii last year, we held classes for seven days, and we also arranged for the distribution of books. Writing books alone is not sufficient; they should be distributed. I therefore told the devotees to make plans for distribution, and a very qualified disciple of your Prabhupada, Niscintya Prabhu, made one plan. He is also publishing the books of Srila Swami Maharaja - as it is - the original books, without changing any idea. He is publishing Srila Swami Maharaja's books, and my books also.

I want to say that the distribution of books is a main part of preaching. Although we do a lot of preaching, it may be that much of it will 'evaporate in the air'. In book publication and distribution, on the other hand, this preaching is solid. We are now publishing many books, and, as you are very inspired to distribute the books of Srila Swami Maharaja, your Srila Prabhupada, I want that you will also distribute my books, which are complementary to his. We have published more than forty books, and we are preparing to publish Sri Ujjvala Nilamani and Sri Bhajana Rahasya. I want to make a plan to distribute these books, and I think that it will be very easy for you all to give some attention to this. You can very easily distribute two books of each title, five books of each, or six books of each, and Niscintya prabhu and Radha-kanta prabhu [*see endnote] will explain to you how easily you can do it. If you do this, it will be pleasing to Srila Swami Maharaja, it will be pleasing to me, and it will also be very helpful for the devotees. I don't want to distribute these books for the purpose of making money. I want people to have the books so that they can see how glorious they are, and by that they can advance.

[There was a book publication-distribution darsana held last year in New Vraja, in which devotees asked Srila Maharaja a few questions:]

[Devotee:] In ISKCON, the big danger was that so much success was coming from distributing books, and so much money was coming. This is what caused the problem of control and fighting...

[Srila Narayana Maharaja:] But money will not be our center. We are spending for Krsna whatever is coming, so there is no problem. Also, book distribution will help devotees to maintain themselves. If they are sincere, nothing like this will happen. And if they are not sincere, then everything will happen.

[Devotee:] I have a question regarding devotees selling books to maintain themselves. You just asked Radha-kanta prabhu (coordinator for wholesaling Srila Maharaja's books in the U.S.) if the prices of the books will be low enough so that devotees can make profit and maintain themselves. How can a devotee know that, "I am maintaining myself by this book distribution," and at the same time have a pure heart and compassion to the persons to whom he is selling books?

[Srila Narayana Maharaja:] It is a very easy thing. If I have offered myself to my Gurudeva, then I am taking his remnants and thinking that he is supporting and nourishing me. What harm is there in that? Do you understand what I am telling you? If I am surrendered to Gurudeva and Krsna, there will be no question of having a separate interest, and there will be no anxiety. If the service is performed in the right way, if it is performed in the right process, if the disciple has offered himself unto the lotus feet of Gurudeva, then he knows that Gurudeva must support and nourish him. Where else will he go? So there is no harm in maintaining oneself through book distribution; but that person should be very surrendered.

[Devotee:] He doesn't need to think he is maintaining himself while speaking to someone, to sell that person a book?

[Srila Narayana Maharaja:] There is no question of that. When we were with Gurudeva, we never thought, "We are maintaining ourselves by serving." We considered that we totally belong to Gurudeva.

[Devotee:] One of the problems that came out of book distribution in ISKCON was that there was a profit motive, and through that profit motive devotees would be saying all kinds of bogus things to people on the streets.

[Devotee:] But now the whole idea of book distribution is changing.

[Devotee:] And there is no point in trying to regulate anything. (Devotees live separately, all over the world) because whatever anyone is going to do, they are going to do.

[Srila Maharaja:] We only want to solve everything by love and affection.

On the evening before the last class of Srila Maharaja's stay in any city, whenever Niscintya dasa and Radha-kanta dasa are present, they stand up at the end of the class and announce their service to the audience. They offer to make four or five sizes of boxes of varieties of Srila Maharaja's books (Srila Prabhupada's books are easily available from the BBT and Niscintya dasa). They request the assembled devotees to raise their hands and call out what size box they want to take home and distribute to friends, relatives, business acquaintances, and strangers' on the streets, in schools and colleges, at nama-hatta programs, etc.; on the occasions of birthdays, anniversaries, graduations, or plain kindness. As Prabhupada used to encourage, especially householder devotees, that the best business is preaching and book distribution, so Srila Maharaja encourages his audience that if they sell any books, they can, if they wish, keep the profits for their own preaching, their coming to Vrndavana, or for their maintenance. Then, after a short talk, Niscintya dasa and Radha-kanta dasa ask for a show of hands and for the devotees to call out what size box they want to take home and distribute.

The boxes contain $20, $50, $108, $300, $500, and $1000 worth of various sizes and titles of books. Devotees raise their hands, call out numbers (20, 50, 108, etc.). Some devotees, who want to assist but may be shy to personally distribute themselves, pledge a donation for any of the preacher-devotees present. The devotees' names are written down as they make their pledges. Then, during the next day, the coordinators make up the boxes and distribute them after Srila Maharaja's next and last evening class.

After Srila Maharaja left America, he went to Europe, and there, especially in England, he requested that the same 'plan' be inaugurated.]