The Inner Meaning Of The Ratha-Yatra Festival 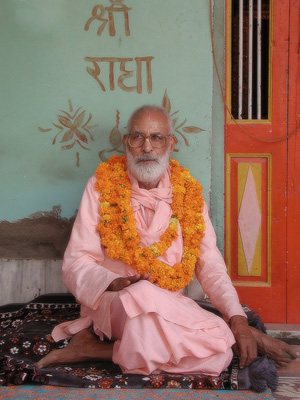 (Part 2 of a Lecture Given in Birmingham, England on June 26, 2001)
Tridandisvami Sri Srimad Bhaktivedanta Narayana Maharaja

[During the week-long, July 8-14 Ratha-yatra festival in Birmingham, England this year, Srila Maharaja spoke briefly on the subject matter contained in the following lecture. Because he spoke more elaborately on the same topic at last year's festival, we are posting that one to the respected reader.]

In the beginning of the Ratha-yatra car festival, Sri Caitanya Mahaprabhu offers a prayer to Jagannatha-deva, not in the form of Lord Jagannatha or Vasudeva Krsna, but in the form of Vrajendranandana Sri Krsna:

["Sri Krsna is He who is known as jana-nivasa, the ultimate resort of all living entities, and who is also known as Devakinandana or Yasodanandana, the son of Devaki and Yasoda. He is the guide of the Yadu dynasty, and with His mighty arms He kills everything inauspicious, as well as every man who is impious. By His presence He destroys all things inauspicious for all living entities, moving and inert. His blissful smiling face always increases the lusty desires of the gopis of Vrndavana. May He be all-glorious and happy."]

Caitanya Mahaprabhu is praying in the mood of Srimati Radhika meeting Krsna at Kuruksetra. The gopis are bringing that Krsna to Vrndavana, and by their mood they now decorate Him with flowers. They forcibly give Him the flute that He left in Vrndavana with Mother Yasoda, along with His peacock feather, as they whisper in His ears, "Don't say that Your father and mother are Vasudeva and Devaki. Don't say that You are from the Yadu-vamsa and that You are a Yadava. Say only you that You are a gopa."

Sri Caitanya Mahaprabhu thus prays in this way: Jayati jana-nivaso devaki-janma-vado. There are so many profound meanings here. If Caitanya Mahaprabhu or Srila Sanatana Gosvami explain it, they will explain it with one hundred meanings, and each meaning will be deeper and more unfathomable then the previous one.

Jayati jana-nivaso. In this sloka, the whole Srimad Bhagavatam is present in its entirety, from beginning to end, and Sanatana Gosvami has quoted it in his Brhad Bhagavatamrtam. Jana-nivaso means, "You are always in the hearts of all as Paramatma." As Paramatma, however, Krsna cannot live in the hearts of the Vrajavasis. He must be in the form of Vrajendranandana Syamasundara there. Jana also means 'nija-jana,' near and dear, and therefore jana means Krsna's own personal associates.

Devaki-janma-vado. Only Mathuravasis and worldly persons can say that Krsna took birth from the womb of Mother Devaki. This is only a 'saying'. Actually, He is the son of Mother Yasoda. She is really His mother.

Yadu-vara-parisat svair dorbhir. The Yadu-vamsis are the nija-jana of Dvarakadhisa Krsna. They are His associates. It seems that Vasudeva Krsna is being described here, and Arjuna, Bhima, and all others like them are like His arms. Vasudeva Krsna fought in the Mahabharata battle and here and there, and He fought with Paundraka Vasudeva and all other demons. It seems like all of Dvaraka-lila is described here, but actually it is Vrajendranandana Krsna who is being described. Krsna never killed anyone in Vraja. Maha-Visnu and all incarnations are within His body, and it was they who fought with and killed the demons. Vrjina-ghnah sthira-cara. In Vrndavana, simply by His smiling face and flute, He used to take away all kinds of problems and suffering. What was the suffering of those in Vrndavana? It was only their separation mood. They had no other problems at all.

Here in this verse, the pastimes of Gokula, Vrndavana, Radha Kunda, Syama Kunda, rasa-lila and all others are included. Sthira-cara-vrjina-ghnah susmita-sri-mukhena vraja-pura-vanitanam vardhayan kama-devam. In this connection Kamadeva does not mean lust. It means prema. What kind off prema? Sneha, mana, pranaya, raga, anuraga, bhava, and mahabhava. The gopis tell Krsna, "You are that person." In this way, Sri Caitanya Mahaprabhu is offering pranama, taking the whole Srimad Bhagavatam in that sloka, as well as all the pastimes of Krsna, and praying.

As I explained before, it is very rare that Mahaprabhu will see Jagannatha, Baladeva and Subhadra. When He sees them He at once enters a very intense separation mood and prays, "After a long time I am meeting with my most beloved, for whom I was burning in the fire of separation." He addresses Jagannatha as Gopi-bhartuh and prays, "Pada-kamalayor dasa-dasanudasah." The word Gopi-bhartuh reveals Krsna's relationship with the gopis. Gopi-bhartuh means the gopis' most beloved, or He who is always controlled by the gopis. Mahaprabhu concludes, "I want to be the dasa-dasanudasah of that Krsna."

At the beginning of the car festival, Prataparudra-raja, the Emperor of Orissa, began sweeping the road. He wore the dress of a devotee and looked very simple, like a beggar. He swept with an ordinary coconut stick broom mixed with gold, and with his own hands he watered the ground with fragrant substances, like rose water and kiori, so that the dust on the road would not rise up. This is the job of a sweeper.

The tradition of the kings of Orissa sweeping the road at the commencement of the Ratha-yatra festival is an old one, and therefore, many years before, the King who preceded Maharaja Prataparudra, Purusottama Jana, also swept the road every year for Jagannatha-deva.

Purusottama Jana had made an arrangement with the King of Kataka Nagara that he would marry the King's daughter. The two Kings had been communicating with each other through messengers, and by that means the King of Kataka Nagara informed Purusottama Jana that he would come to meet him in person. He did not specify a date, however, and later, unannounced, he went to see with his own eyes how beautiful, wealthy and qualified he was. At that time, fortunately or unfortunately, it was the first day of the car festival, and, disguised as a sweeper, King Purusottama Jana was brooming the road for Jagannath-deva. Seeing this, the King of Kataka Nagara became very upset, and he felt some disgust toward him. He thought, "This King is supposed to be so wealthy and qualified, and still he is brooming? I cannot give my daughter to this sweeper." He thus returned home.

A few days after the festival was over, King Purusottama Jana remembered the agreement and wondered what had happened. He thought, "The King of Kataka Nagara wanted to give his daughter in marriage to me. But there has been no news at all." He then discovered through his spies that the King now felt some hatred for him because he had been brooming, and he was no longer going to give his daughter to him in marriage. Because of this, King Purusottama Jana declared war on the King of Kataka Nagara and invaded his kingdom.

The demigod Ganesh was somewhat favorable towards that King, and therefore he defeated Purusottama Jana, who became upset and returned to Puri. Purusottama Jana then went to the temple and told Lord Jagannatha, "I am serving You, and yet You are not helping me? I was defeated because Ganesh helped him. I remembered You but You would not help me. I will die here. I will not eat or drink anything and I will die here, before You, in Your temple."

Later that night King Purusottama Jana saw a dream in which Jagannatha-deva told him, "Don't worry. Go again and invade that King's territory. Baladeva and I will personally go there, and somehow you will be aware of this. You will defeat that King, Ganesh, and all others.

On the next day the King called his army and his generals, and again he started on his way. By the time he was about to approach Chilka Alalanatha, there were two young and very beautiful boys riding on white and red horses considerably ahead of him. Those boys asked an old village woman who was carrying a very big pot of buttermilk on her head, "Can you give us some buttermilk?"

She replied, "Can You pay? If You pay, I will give You some buttermilk."

One of the boys said, "I can pay. We are soldiers and we are on the way to fight. My King is coming and he will pay you when he reaches here."

"How will he know that You have taken this buttermilk?"

"We will give you some proof. You can show the King that proof and then he will pay."

That village lady gave Them her whole pot, and They drank all the buttermilk and felt very satisfied. Krsna, who was on the red horse, gave His very beautiful ring and told the vendor, "Give this ring to the King and tell him, 'The owner of this ring has gone forward and said you would pay for His buttermilk.'"

The soldiers replied, "The King is there."

She then walked up to the King and said, "Your two soldiers have gone ahead. They have taken my buttermilk and totally finished my whole pot. They told me, 'Our King will pay.'"

The King told the old lady, "None of my soldiers have gone before us."

She replied, "Yes they have. There were two young, very beautiful and energetic soldiers who went before you."

The King wanted to see some proof, and therefore the old lady produced two finger-rings. He saw on them the names Jagannatha Singh and Baladeva Singh (Singh means 'lion') and thought, "These are the two rings I had made by a goldsmith and presented to Krsna and Baladeva. They are the same rings! Krsna and Baladeva have done this for me so that I would know They are with me. This time surely I will defeat that King." He then became very happy.

He then invaded the kingdom of his 'enemy,' and there he defeated his entire army. He forcibly took the daughter of that King, along with a very costly, golden mora singhasana (peacock throne) and Vanda (cheater) Ganesh. He arrested that King, and then mercifully left him and said, "I shall not kill you." He also conquered Vidyanagara, and with the permission of the Deity Saksi-gopal, he brought Him to Kataka.

The King then brought that girl to Puri, thinking, "I will not marry her. I will give her to my sweeper." Later, when he was ready to give her away, all of his ministers, who were very kind, saw her crying, "He will give me to a sweeper." They pacified her, and they also told the King, "Don't worry. At the right time, during the next car festival, you can give this girl to your sweeper."

The next year the car festival again took place, and again Purusottama Jana was brooming. At that time all his ministers inspired the girl to go to him and say, "I want to marry this very sweeper." The King's ministers and his guru then approached him together and said, "This is very good. You are a sweeper, and this girl will be the wife of a sweeper. We agree with this." The girl began to weep, the King was thus bound to accept her as his wife, and his son became King Prataparudra.

These are very good topics.