The Inner Meaning of a Song 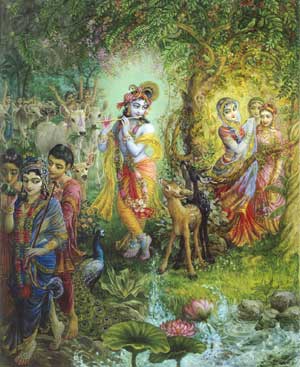 [The following is a translation of the class given by Srila Bhaktivedanta Narayana Gosvami Maharaja on the morning of Sri Krsna Janmastami. In this class, Srila Narayana Maharaja explained the deep meaning of Sri Jayadeva Gosvami's bhajana, Sri Mangala-gitam. The translation was kindly given by Uttama dasa brahmacari.]

In the beginning of this morning's class, Srila Narayana Maharaja asked Krsna dasa  to lead the assembled devotees in singing Sri Mangala-gitam. He said that because today is Krsna's Appearance Day, we should begin by first singing this kirtana. Then he said, "Who is really qualified to hear this bhajana? Sri Krsna Himself is actually the only person qualified to hear it. Sri Jayadeva Gosvami is only singing this song to give Krsna happiness. He hopes to see the Lord pleased."

After the bhajana, Srila Narayana Maharaja gave the following elaboration of the verses: When Krsna sees Radharani looking towards Him with sidelong glances, He looses all His power and begins to fall to the ground. His cowherd friend Madhu-mangala notices this and says, "What are You doing? Your mother, father, and all Your relatives are watching. You should check Yourself."

Sri Krsna takes shelter of kamala. Srita means shelter, and here, kamala means Radharani. Kuca-mandala means that Krsna is taking shelter of the breasts of Radharani. Dhrta-kundala. Krsna's kundala (earrings) are not ordinary. His kundala is the glories of Radharani, and He is always "wearing" that.

Kalita Lalita: Lalita means very attractive and beautiful. Here, Lalita refers to Krsna's vanamala, His garland is made from different varieties of forest flowers. It hangs around His neck and extends down to His lotus feet.

Jaya jaya deva hare: All glories to this Krsna who steals all the distress of the living entities. Especially, He steals the heart of Srimati Radharani. No one can steal the heart of Radharani, except for Krsna.

Bhava means ‘material existence,’ and it also means ‘bondage.’ He who delivers others from this material bondage is called bhava-khandana. In this connection, is there any material bondage for the Vraja-devis? They have none at all. Their only bondage is their feelings of separation from Krsna. Krsna is the only person qualified to remove this bondage of separation from the Vraja-devis, so bhava-khandana means that Krsna can remove the distress of the separation of the gopis. 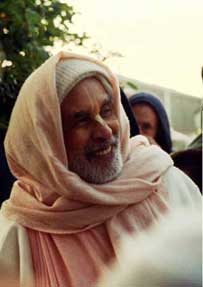 Muni-jana-manasa-hamsa means the ‘great sages,’ and especially refers to those who meditated on Krsna for a long time in the Dandakaranya forest. It applies to all the yautiki rsis (those who came to Krsna in a group) and ayautiki rsis (those who came individually) who became gopis in their next birth. Muni also refers to Sri Sukadeva Gosvami. Krsna is just like the swan, swimming in the minds of these munis. Jaya jaya deva hare: Jayadeva Gosvami is singing, "All glories to this Krsna."

Kaliya-visadhara ganjana refers to that Krsna who smashes the pride of Kaliya. Krsna easily removed the poison of Kaliya, although Kaliya was extremely poisonous, and after doing so Kaliya became like nectar. In the same way, Krsna can also smash our anarthas, or unwanted desires. We therefore pray to that Krsna.

Jana-ranjana: Jana here means Vraja-jana, or ‘the residents of Vraja,’ like Nanda Baba, Yasoda Ma, and all of Krsna's friends and cows. Jana here especially means the Vraja-devis, and among them, Srimati Radhika is the most prominent. Krsna is the only person who gives pleasure to the Vraja-jana. He has no other duty; He is always thinking how to give pleasure to Srimati Radharani.

Yadu-kula-nalina-dinesa: Yadu-kula means ‘the dynasty of Nanda Baba,’ not the dynasty of Mathura. Nalina means ‘lotus flower,’ and here nalina especially means the lotus flower of the Vraja dynasty, or the Vraja-devis, who are just like the lotus in Vraja-mandala.

Dinesa means ‘the sun,’ and here dinesa refers to Krsna. Krsna is just like the sun for the lotus flower of Vraja-bhumi. When the lotus flowers of Vraja-mandala offer themselves to Krsna, they begin to blossom, and therefore Jayadeva Gosvami is singing, jaya jaya deva hare: "I'm praying to this Hari, who, just like the sunlight, can make the flower-like gopis blossom."

Madhu, Mura, and Naraka were demons who were killed by Krsna – not really by Krsna Himself, but by other Visnu incarnations. Janmastami is known to have taken place on the eighth day of the moon, but in reality, the eighth day of the moon is the full moon day. In other words, the moon is always complete; only according to our own vision do we see that today is the eighth day of the moon – or the fifth, or sixth, etc. Although always full, the moon is sometimes covered in part by a shadow, and thus we see only three-quarters, half, one quarter, or less. In the same way, all of the incarnations of Krsna, the Visnu incarnations, are also Krsna. It is only our vision that makes us see any difference. It is generally understood that visnu-tattva kills the demons, not Krsna. But actually Visnu is Krsna Himself, Purnacandra (a name of Krsna that means ‘the full moon’), the source of all incarnations.

Just as the full moon is also always present on the eighth, and any other day of the moon, Purnacandra, Krsna, is eternally present. In this way, when Visnu killed the Madhu and Mura demons, Krsna was also there. Here it says, madhu mura vinasana. He who killed Mura, and Madhu is also Krsna; the verse indicates Krsna.

Garudasana: Generally Garudasana refers to Narayana, He whose carrier is Garuda. But here, Garudasana means Krsna. Krsna once made Sridama His Garuda-carrier. Jayadeva Gosvami is uttering the word Garudasana, meaning Krsna.

Sura kula keli nidana, jaya jaya deva hare: Sura generally means ‘demigods,’ but Krsna's madhurya pastimes are not for the demigods. Not only can't they see these pastimes, they also have no qualification to hear them. Venu-gita of Srimad Bhagavatam explains that the demigoddesses have a chance to see something of Vraja-lila, but they cannot see completely. Yet, even when they saw only the semblance of the pastimes there, they fainted and became unconscious. The demigods on the other hand, have no qualification to see Krsna's pastimes, especially the madhurya-mayi pastimes. Only those who attain a qualification like Krsna can hear these pastimes. Keli-nidana: Keli means those pastimes that are giving pleasure to this type of sura.

Amala means ‘without any spots or blemishes,’ and kamala means ‘lotus flower.’ Krsna's eyes are just like the petals a spotless lotus flower. Tri-bhuvana-bhavana-nidhana: Tribhuvana here means Vrajabhumi, which is the essence of all of the three worlds. Krsna is the only shelter of Vrajabhumi and the Vrajavasis. Jaya jaya deva hare: I offer my obeisances to this Hari, who is the shelter of all the Vrajavasis.

The general meaning of janaka-suta is Sita devi, the consort of Lord Ramacandra. In the pastimes of Ramacandra, Janaka-suta is decorating Rama with many kinds of paraphernalia. This can also be applied to Krsna's and Radharani's pastimes. Sometimes, Radharani decorates Krsna in the forest. Janaka also means ‘father,’ and suta means ‘daughter.’ Therefore janaka-suta in this connection means the daughter of Vrsabhanu Baba. Janaka-suta-krta-bhusana: Bhusana means ‘decoration.’ Krsna is decorated by the daughter of Vrsabhanu Baba.

Jita-dusana means ‘He who defeated the demon, Kala Dusana.’ But, jita-dusana also means ‘those things that are very bad,’ like the very intense separation of the Vraja-devis. Hari, Krsna, removes this, so I offer my obeisances unto that Hari.
Samara-samita-dasakantha: This Nanda-lala (the darling son of Nanda Baba) is defeating dasakantha, the many demons. Jayadeva Gosvami is saying that this Nanda-lala is killing all the demons in Vraja. Jaya jaya deva! hare. I offer my obeisances unto the lotus feet of Hari.

Abhinava means ‘very new,’ and jaladhara means that the newly formed cloud is appearing in the sky. It is very soft, glistening, pleasing, and attractive. Krsna's complexion is like this nava-jaladhara.

Dhrta-mandara: Mandara here doesn't refer to Mandara-parvat (one of the largest mountains in the universe; the mountain of the demigods); it means Giri-Govardhana. In one way, it can also be understood that mandara means the two Giriraja Govardhanas of Srimati Radhika's breasts, upon which Krsna takes shelter. The elevated ideas in this connection cannot actually be expressed. We will have to understand them by our bhajana.

Sri-mukha-candra-cakora: Here, sri-mukha refers to Srimati Radharani, whose lotus face is just like the moon. Krsna always hankers to have darsana of that moon. Just like the cakora bird, Krsna is also always one-pointed. The cakora bird will only drink water that comes directly from rain, not from any pond, or ocean, or river. In the same way, Krsna is always hankering to drink the nectar of the lotus face of Srimati Radharani.

Here, Jayadeva Gosvami, who is most merciful and a very rasika Vaisnava within our sampradya, is saying, tava carane pranata vayam. Vayam is plural. Jayadeva Gosvami alone is writing this song, but he is including us within his prayer to Krsna: "Oh, please be merciful. We are now taking shelter at Your lotus feet."

Sri Jayadeva Gosvami is uttering, jaya jaya deva hare three times, so that Krsna will listen to his prayer. The position of the maidservant of Srimati Radharani is topmost, and Krsna Himself wants to serve Her as Her maidservant. Although it is the topmost position, still, Jayadeva Gosvami is appealing three times so that Krsna will accept his prayer. He is indicating, "It is for this purpose that I offer my pranama unto the lotus feet of that Hari."

What happened to Krsna when He heard this song? His ears stood up and, just like the ears of a calf or a cow, took the form of cups. This song, only meant for Krsna, is the only real offering of prayers of glorification to Him. He becomes very pleased when His devotees sing this song. He will be pleased when you worship She who is dearest to Him. Radha-Krsna's exalted pastimes are explained in Ujjvala Nilamani and other scriptures of the Gosvamis, and if we pray to pastimes such as Sri Krsna offering His head at the lotus feet of Srimati Radhika, He will become very pleased."