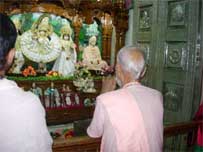 [This year, 2006, the appearance day of Sri Baladeva is August 9. On the warm summer evening at Sri Rupa-Sanatana Gaudiya Matha, Srila Narayana Maharaja gave a short talk on Baladeva's glories, and that will come to you soon. In the meantime, kindly accept this class, given a couple of years ago, wherein he discussed many of the same points:]