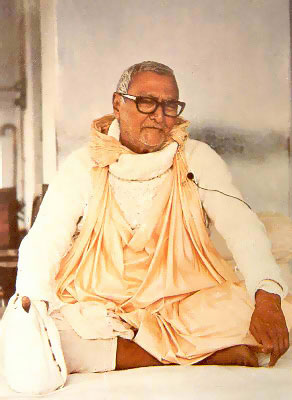 Srila Sridhara Maharaja, whose brahmacari name was Ramananda Brahmacari, had previously been admitted into law-college in Calcutta. One day he came by chance to the Gaudiya Matha in Navadvipa where Srila Prabhupada was residing. When he reached there he saw a brahmacari sitting on a chair, in white dress, and holding a cane. Many brahmacaris and even sannyasis were coming to that devotee, offering him sastang dandavat pranamas, and inquiring from him. Keeping his feet on the table and moving his feet, he would reply to those sannyasis and brahmacaris, and again they would offer pranama to him. Ramananda brahmacari wondered, "Who is this person in white clothing, a cane in his hand and wearing a very beautiful dhoti and chaddar, sitting on a chair? He is so young in age and yet all the senior devotees are offering pranama to him. Why? Who is he?" He asked someone nearby this question and that person replied, "Do you not know? He is Vinoda Da." "Da" means "elder brother." Srila Sridhar Maharaja asked, "Why are all respecting him?" That person replied, "He established this matha. He has taken out all the Muslim graves and thrown them in the Ganges, and in one day he changed a graveyard into beautiful gardens. He also controlled all Muslims in the area. At first, when the brahmacaris and sannyasis used to go out for begging, the Muslims would make sarcastic comments, but when he came he established the glories of the Gaudiya math Srila Prabhupada and now the devotees are respected."

Srila Sridhara Maharaja then approached Guru Maharaja, who took him to Srila Prabhupada, and there he heard very deep and powerful hari-katha. He decided on that same day to give up studying and all other worldly engagements, and join the Gaudiya matha. Srila Prabhupada told him, "It will be better if you complete your study of law and then come," but Srila Sridhara Maharaja decided not to. He left his house and joined the Gaudiya mission.

Each year I would go and take darsana with Guru Maharaja of Srila Sridhara Maharaja, and I witnessed how much love and affection these godbrothers had for each other. They always respected each other. A devotee may have been aged, but if he was sincere they gave him the appropriate respect; and I have learned something about this from both of them. I always give respect to my superiors. Throughout my devotional life I have given respect to Srila Trivikrama Maharaja, and Srila Vamana Maharaja, and they also gave respect to each other and to me. You should try to learn all the principles of Vaisnava etiquette.

Srila Sridhara Maharaja was a great "bhakta-vatsala", that is, he was so generous and kind. Though this is something that should not be told I am bound to tell it, therwise you will not be able to realize his kindness. Even if one of his disciples did wrong, even if he was lusty and after having spent many years in the matha he married, even if a disciple was a great thief and stole vast amounts of money, still Sridhar Maharaja was very polite, generous, and merciful towards him. He even dragged a disciple from his household life and again established him in sannyasa. I will not tell the name of this disciple, but I think that you all know who he is. It is an open secret. I have seen so many such incidences. He was truly bhakta vatsalya.

I have heard his Sri Premadhama Deva Stotram, as well as his Sri Prabhupada-Padma-Stavakah:

["O Srila Prabhupada, your beautiful lotus feet are cherished by millions and millions of the purest and most qualified devotees, and you are the most competent personality to preach the recognized process for this era. Your sacred lotus feet are adorable, as they openly grant fearlessness and bestow the highest benediction to all living entities. I eternally offer my respects unto that charming effulgence that shines forth from the radiant lotus toe-tips of Srila Bhaktisiddhanta Sarasvati Thakura Prabhupada."]

He composed this Prabhupada-astakam at the beginning of his life in the matha, and it still is sung in all branches of the Gaudiya Matha. This kirtana is extremely beautiful and ornamental: "Sujanarbuda radhita pada yugam, yuga dharma dhurandhara patra varam". It contains many alankara (ornaments of language) Besides this astakam he has composed many Sanskrit kirtanas and verses.

His Premadhama Deva Stotram is dedicated to Sri Caitanya Mahaprabhu. It is marvelous, extraordinary, and it has no comparison. Only our six Gosvamis, Srila Visvanatha Cakravarti Thakura and others like them used to write like this, and our Guru Maharaja has also written in this magnificent manner:

["I worship the lotus feet of that form of Sri Krsna when, due to being thoroughly immersed in separation from Srimati Radhika (who is displaying mana, Her mood of jealous anger), His own dark complexion vanishes and He assumes Her bright, golden luster; or I worship the lotus feet of Sri Krsna as He is embraced by Srimati Radhika (after Her mana has broken)." (Sri-Radha-Vinoda-Vihari-Tattvastakam, verse 1]

How beautiful and ornamental! Both Srila Sridhara Maharaja and my Guru Maharaja were greatly learned in Sanskrit. When I compare them to myself I see that I have no knowledge and no ability in Sanskrit. In comparison to them I am very insignificant and unqualified. Srila Vamana Maharaja, Srila Trivikrama Maharaja and myself at first decided not to take sannyasa because we considered ourselves unqualified and ignorant. especially myself. Even now I am not giving anything new. Devotees throughout the world come to hear my classes, but I don't understand what is there in those classes. Then I consider that something is there, but it didn't come from me. It came from my guru-parampara. It came from what I have heard from my guru-parampara, Srila Rupa Gosvami, Srila Sanatana Gosvami, Srila Raghunatha dasa Gosvami, Srila Visvanatha Cakravarti Thakura, Srila Krsnadasa Kaviraja Gosvami, Srila Bhaktivinoda Thakura, Srila Prabhupada, my Gurudeva, Parama-pujapada Sridhara Gosvami Maharaja, Prapujyacarana Srila Bhaktivedanta Svami Maharaja and others like them. I never say anything new in my classes Only my voice is different.

Someone may say, "You are somewhat different from Srila Bhaktivedanta Svami Maharaja." I reply, "Yes I am different, because he was somewhat shorter than me, and he went to college and mission schools whereas I never went to such schools. He has so many great qualities whereas I have no such qualities, and there is sometimes a difference in our choice of words. We present the same wine in different bottles. The wine is not different. I am not explaining anything new. Parama-pujyapada Srila Svami Maharaja has also not explained anything new, nor has Pujyapada Sridhara Maharaja. They have also given the same thing in new bottles. They presented the same ideas with different words. Srila Sridhara Maharaja and my Gurudeva have taught the same philosophy and principles as taught by Srila Jiva Gosvami. They have not given anything new.