In Glorification of Srila Prabhupada 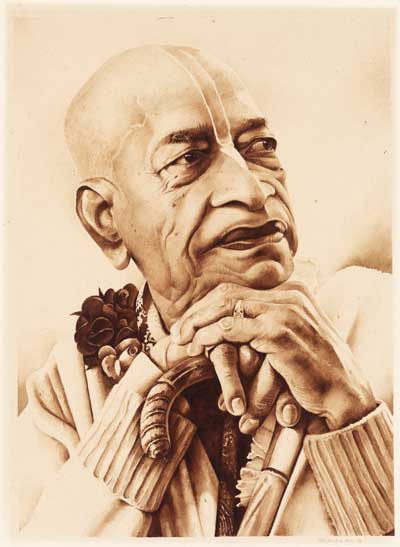 [Below is an excerpt from Srila Bhaktivedanta Narayana Maharaja’s classes, which he gave in October 5th, 2004, glorifying Srila Prabhupada:]

Why are devotees from so many countries assembled here? I think it was the desire of Sri Krsna, in the form of Sri Sacinandana Gaurahari and Sri Nityananda Prabhu.

["In every town and village, the chanting of My name will be heard."]

This was the mission, but why? What was the reason for their coming?

Srila Maharaja interjects a request: If any senior devotees, disciples of Srila Bhaktivedanta Swami Maharaja are sitting or standing at the back, they should come and sit in front.

What was the mission of Sri Caitanya Mahaprabhu, Srila Rupa Gosvami, Srila Bhaktivinoda Thakura, Srila Bhaktisiddhanta Sarasvati Thakura Prabhupada and Srila Bhaktivedanta Swami Prabhupada? They all had the same mission, and I am also coming for this same preaching mission. I am very grateful to Srila Bhaktivedanta Swami Maharaja that he gave me service. I have known him since 1946. I think most of you here were not yet born. I have been serving him since that time. As you may know, he and I have so many relationships. He was my transcendental siksa-guru, he was junior in sannyasa to me, and we were bosom friends. We have so many transcendental relations and you can read about this in the book called "My Siksa Guru and Priya Bandhu", compiled by Mula-prakrti didi. Our mission is the same.

Perhaps you all know this, but there are some newcomers who do not. In his last days, in Vrndavana, Srila Bhaktivedanta Swami Maharaja called me to see him. At that time he had stopped talking to anyone. When he saw me, however, he took my hands in his and at once sat up from his bed and wanted to give me a seat there. I requested him to stay as he was.

Pure devotees are so humble. He told me, "I have committed many offenses to you and to my god-brothers, saying that they only sleep and take prasadam. I said they do nothing but ring bells in the temple. This was wrong. I know that you are most qualified. I have not taken sannyasa from your Gurudeva (Srila Bhaktiprajnana Kesava Gosvami Maharaja) as a formality, but for bhajana-sadhana." 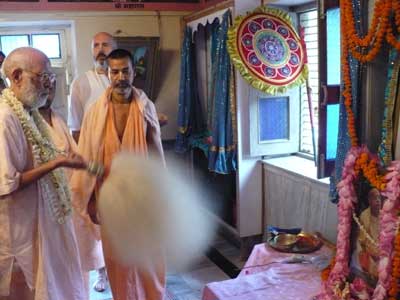 There were so many seniors, like Pujyapada Bhakti Raksaka Sridhara Maharaja and Srila Vana Maharaja and others, but Srila Bhaktisiddhanta Sarasvati Thakura Prabhupada sprinkled so much mercy on Srila Bhaktivedanta Swami Prabhupada by telling him, "Your English is perfect, you are a poet and preacher, you play mrdaìga and you can do everything. You are qualified to preach this mission in the West."

Srila Bhaktisiddhanta Sarasvati Thakura Prabhupada thus sent his own "hand" to Western and Eastern countries. In a couple of years your Srila Prabhupada established preaching centers in American cities like New York, New Jersey, Los Angeles and San Francisco, European countries, Australia and everywhere – in the mountains, on islands in oceans, and perhaps in every atom. You are spiritual atoms.

He told me on that day, "Please excuse me; I have committed some offenses. Please tell my god-brothers that they are very qualified, and in some sense they are more qualified then I am. I have preached Sriman Mahaprabhu's mission everywhere and I have collected thousands of disciples throughout the world; but due to their lack of capacity to receive, I could not fully train them." And in Bengali he said, "I have collected some monkeys." He told me this in Bengali, so that certain disciples would not understand and thus become upset but the tape recorder captured every word.

I told him, "You did not commit any kind of offense. You told this to your neophyte disciples, because that was what they needed at the time, for their inspiration to serve and preach. There is nothing to excuse." He then ordered me, "You should give me samadhi with your own hands. I want it done by you not by anyone else." And I did so. He told me at that time to help his devotees, and for that reason I have come here to the West. I have come especially to help the senior-most devotees of Srila Bhaktivedanta Swami Maharaja. There are so many hundreds, like Padmanabha Maharaja, Bhudhara, Bhagavata and Krparama, and so many ladies. They are all directly related to him.

I told him not to be worried, because I would fulfill his order. I am coming to the West to please him, to serve his order and to see his glory – how he preached this mission all over the world in a couple of years - in oceans, on the tops of mountains and hills, in forests and in so many other places. I think that you have come to me by his mercy – through reading his books and hearing hari-katha from any of his disciples. I am successful in preaching because I have a relation with him and he has accepted my service. In a couple of years I have circled the world sixteen times. He circled the world fourteen times. By the mercy of the father, the son and disciple can appear to do more than him.