I Came To Remind You 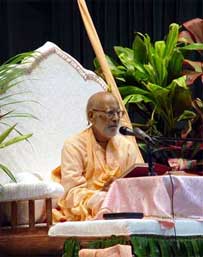 We have been explaining the first verse of Srimad-Bhagavatam. Very high philosophical explanations are coming, but I fear that not everyone understands. If not, I will change the subject and speak about the sweet pastimes of Krsna.

Saunaka Rsi and the other sages asked Srila Suta Gosvami, the disciple of Srila Sukadeva Gosvami, “You know everything. You have read Srimad-Bhagavatam and all Vedic literatures, such as Mahabharata, Ramayana, the Puranas and Upanisads. We have strong faith in you, so please tell us, in a very easy way, how our soul may become eternally happy.”

[“The supreme occupation (dharma) for all humanity is that by which men can attain to loving devotional service unto the transcendent Lord. Such devotional service must be unmotivated and uninterrupted to completely satisfy the self. (Srimad-Bhagavatam)

[“The manifestation of unadulterated devotional service is exhibited when one’s mind is at once attracted to hearing the transcendental name and qualities of the Supreme Personality of Godhead, who is residing in everyone’s heart. Just as the water of the Ganges flows naturally down towards the ocean, such devotional ecstasy, uninterrupted by any material condition, flows towards the Supreme Lord.” (Srimad-Bhagavatam 3.9.12)]

We have explained all these topics, and especially the verse:

This verse tells the highest definition of bhakti, and we have also explained its meaning. If anyone will give up all worldly desires and sense gratification, and engage in visuddha-bhakti (pure bhakti, or bhakti that is free from any mixture of jnana (speculation or knowledge leading to impersonal liberation), tapasya (severe austerities with motives other than attainment of bhakti), astrology and all other activities, in a continuous unbroken stream or flow, day and night, always under the guidance of realized and rasika Vaisnavas, what will happen?

[“By rendering devotional service unto the Personality of Godhead, Sri Krsna, one immediately acquires causeless knowledge and detachment from the world.” (Srimad-Bhagavatam 1.2.7)]

It is sure that by performing devotional activities and hearing hari-katha in this process, detachment for worldly things will come. Moreover, all kinds of tattva-jnana (knowledge and realization of established philosophical truths), sambandha-jnana (knowledge and realization of our transcendental and eternal relationship with Krsna), prema-bhakti (devotional service in love of God) and vraja-bhakti (the highest devotion; that of the residents of Vrndavana) will come. If you are chanting the holy name, worshiping hundreds of Thakurjis (Deities) day and night and performing other devotional activities – but if you have no real faith or taste in hearing hari-katha, then, after some time you will stop engage in your worship, chanting and all such activities, and you will give up bhakti-yoga. First, hear from a bona-fide guru and a taste in hearing hari-katha should come.

[“Hearing and chanting about the transcendental holy name, form, qualities, paraphernalia and pastimes of Lord Visnu, remembering them, serving the lotus feet of the Lord, offering the Lord respectful worship with sixteen types of paraphernalia, offering prayers to the Lord, becoming His servant, considering the Lord one’s best friend, and surrendering everything unto Him (in other words, serving Him with the body, mind and words) – these nine processes are accepted as pure devotional service. (Srimad-Bhagavatam 7.5.23)]

Give preference to this. If any superior Vaisnava is giving hari-katha (speaking about the Lord’s glories), give up all other devotional activities, such as chanting, doing parikrama of Govardhana and Vrndavana, and so on. They will be performed later on; but first hear. If Gurudeva or a high class Vaisnava is telling hari-katha, then don’t chant. Rather, concentrate your mind on hari-katha.

[“Sri Krsna, the Personality of Godhead, who is the Paramatma [Supersoul] in everyone’s heart and the benefactor of the truthful devotee, cleanses desire for material enjoyment from the heart of the devotee who has developed the urge to hear His messages, which are in themselves virtuous when properly heard and chanted.” (Srimad-Bhagavatam 1.2.17)]

These selected verses from the second chapter of canto 1 are the basis of the entire Srimad-Bhagavatam. The entire Bhagavatam is only an explanation of this. Try to understand all these teachings and try to follow them.

We should especially know the verse:

[“By regular attendance in classes on the Bhagavatam and by rendering of service to the pure devotee, all that is troublesome to the heart is almost completely destroyed, and loving service unto the Personality of Godhead, who is praised with transcendental songs, is established as an irrevocable fact.” (Srimad-Bhagavatam 1.2.18)]

[“Thus the knot in the heart is pierced, and all misgivings are cut to pieces. The chain of fruitive actions is terminated when one sees the Self as master.” (SB1.2.21)]

First we should know what anarthas*[see endnote] are. By hearing hari-katha, Lord Krsna will come and purify your hearts, and all anarthas will go away. You should realize what these anarthas are, and whether or not you are covered by them. One of the anarthas is kutinati, which means criticizing others, especially Vaisnavas. We should not criticize.

[*Endnotes – (The following is the four types of anarthas, taken from Bhakti-rasamrta-sindhu-bindhu by Srila Visvanatha Cakravarti Thakura) Anarthas are of four kinds: (1) svarupa-bhrama (illusion about spiritual identity), (2) asat-trsna (thirst for that which is unreal; that is, material enjoyment), (3) aparadha (offences) and (4) hrdaya-daurbalya (weakness of heart).

Hrdaya-daurbalya is of four kinds: (1) tuccha-asakti (attachment for useless things), (2) kuti-nati (deceitful behavior. The word kuti-nati may be broken down into the constituent parts ku, bad or evil, and na or nati, that which is forbidden. In that case it would mean doing wicked deeds or doing that which is forbidden), (3) matsarya (envy) and (4) sva-pratistha-lalasa (desire for one's own fame and prestige).

Utsaha-mayi: A brahmana child, having just begun study of the scriptures, thinks he has immediately become a learned scholar worthy of everyone's praise. Similarly, a person just beginning devotional service may have the audacity to think that he has mastered everything. This is called utsaha-mayi, or filled (puffed-up) with enthusiasm.

Niyamaksama: Then the devotee will resolve, "From today I will chant such and such number of rounds of japa and will pay so many obeisances. I'll also perform services for the devotees. I won't talk about anything except the Lord, and I'll give up all association with people who talk gossip." Though the devotee makes such resolutions every day, he is not always able to carry them out. This is called niyamaksama, or inability to follow rules. Visaya-sangara is the inability to give up sense enjoyment, while niyamaksama is the inability to improve his devotional service.

Taranga-rangini: Finally, it is well-known that the very nature of bhakti is to be attractive, thus many people become attracted to the devotee. And, as the old adage goes, "By the public's attraction one becomes wealthy." Bhakti produces much opportunity for material gain, worship, and position (labha, puja, pratistha). These are weeds around the creeper of bhakti. Seeking one's pleasure (ranga) amidst these weed-like facilities, which are but small waves (taranga) in the ocean of bhakti, is called taranga-rangini, delighting in material facilities. (Madhurya-kadambini pages 15-18]