Guru Wants One Thing - My Loyalty 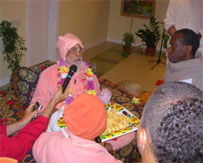 [Srila Narayana Gosvami Maharaja arrived at Sri Radha-Govinda Gaudiya Matha at about 6 am on June 8th. After taking a tour of the temple building – of all the rooms including the brahmacari asrama – he entered the temple room. There he offered obeisances to Sri Gaura-Nitai, Sri Radha-Govinda and Lord Nrsmhadeva, and then sat on the vyasasana. At that time, accompanied by kirtana and bhajanas, there was a foot-bathing ceremony and performance of Guru-puja, after which Srila Narayana Gosvami Maharaja gave a short talk:]

I am very happy. I like this matha (temple). I see there is still some construction going on. So many devotees can stay here. The managers should try to make an application to the government so that 20-25 devotees can always live here. If anyone comes, he can stay and perform kirtana and all other devotional activities. The location is very good. I want this temple to be at least as good as our temples in Mathura and Vrndavana, and it can have even more devotees than those temples. There should not be less than 20 or 15 devotees.

The devotees should regularly go out for nagara-sankirtana and book distribution, and lectures should also take place regularly. Hari-katha is essential – it is our life. I want to arrange that any good sannyasi can stay here, and Jaga Mohan will help him. I want sannyasis and preachers to come here for at least 15 days or one month; they should preach here.

I think that this temple is good in all respects, but how will it be maintained? This is a big problem. I want the brahmacaris and sannyasis here to be sincere. They should go out to preach and distribute books. And, as in our temple in Mathura, they should beg alms here and there. They should beg for food grains, money and anything needed to maintain the temple. If they simply take a big donation from a big donor and don’t go preaching, this is not good. They have to go out for preaching. This is the main thing.

All collections should be put in the temple account; not in anyone’s personal pocket. In turn, the temple should look after the devotees and give them what they need. Especially, we should try to respect each other. Juniors should respect seniors, and seniors should have love and affection for juniors, with no ulterior motive.

I have not called you all so that you can make money or have a position. I have never told you that I would give you money for business purposes. Some of you are from England and other places very far away from here. I have called you all to tell you that if you follow me, I will take you to Krsna. That is my only promise. I will give you bhakti. I never promised that I would give you money, position or anything other than bhakti.

I will take you to Lord Sri Krsna, but there is one condition. I don’t want anything from you – I want only your loyalty. Why did you first perform guru-puja when I arrived this morning? Can we achieve bhakti without the help of Guru? I want you all to become loyal.

What is loyalty to guru? You should know that a real and qualified guru is not like an ordinary person. Do not think that guru dies like a mortal person.

I have never told anyone of you that you should come to me and I will make you acarya, and that you will be guru of all. Have I told you this? If anyone wants this, he is not being loyal. If anyone conceals something from guru – if he is keeping something secret from guru – guru, not me – what will guru do? He will not give bhakti to that person. You can learn so many philosophical conclusions (siddhantas), but you will not receive real bhakti from him. He has the right to reserve it.

It depends on you. If you are loyal and have nothing to take from Gurudeva – only his bhakti – he will know this. He will give you bhakti with realization. Otherwise, bhakti will never, never, never be possible for you. If you are a cheater, you should know that guru is the cheater of the cheaters. He is the best cheater. He will cheat you. Nowadays this cheating inclination of disciples is in the air. Be careful about this.

Some whistling winds are coming; some idea that, “We should keep something for ourselves.” Some are thinking, “Later on, when guru will die, this and that will happen. We will do this and that.” In such persons eyes guru dies – and they want that guru will die very soon, so that “we will be acarya.” But guru will never die. So you should be alert – very, very careful. Don’t mix with persons who have this idea. I want to stop that influence. I don’t want to waste your time and your life. I want only to give you bhakti. Some wrong ideas are coming, and we should try to stop this nonsense.

I want this temple to be ideal. Those who will be here should be loyal to the temple, and this is loyalty to guru. Many preachers should come here and give excellent classes concerning the process to attain pure bhakti.

[Question:] In regard to guru never dying and being eternal: in the song we just sang, Sri Guru Carana Padma, it states: “He is my lord, birth after birth.” So many births from now, when we are advancing closer to realization, does that same guru come to us again?

[Srila Narayana Gosvami Maharaja:] Guru will come. During the rasa dance, Krsna was alone and the gopis were unlimited in number. Was it Krsna Himself who was dancing with all those gopis? Or did other Krsnas come? How can one Krsna dance with millions and millions of gopis?

[Question:] He danced so quickly, from one gopi to another, that it seems like He was with each one the entire time.

[Srila Narayana Gosvami Maharaja:] Guru is servant of that Krsna. Just as there is one form in the rasa dance, so akanda-guru-tattva is one. Or, you can say that guru will come in so many forms, but guru is one. The same guru will come. You should have firm faith in this idea.

Guru has at least two forms:

“Guru-rupi-sakhi-vande - I forever worship my guru, who in his form as an exalted sakhi is happily immersed in the company of Srimati Radhika and the other sakhis.”

Guru is the same person, both in his sakhi and sadhaka forms. A devotee should have firm belief that the same guru will come. Guru is akanda-guru-tattva, a manifestation of Lord Nityananda.

[Question:] In this birth, Srila Prabhupada is my diksa-guru and you are my siksa-guru. So guru is one, but at the same time different personalities?

[Srila Narayana Gosvami Maharaja:] It may be. Radha and Krsna are one, but for the performance of pastimes they have become two.

I want you to make a plan so that this temple will run very well. Find out how that will be accomplished.

[Question:] The deity of Lord Nrsmhadeva is present on the altar here. Some devotees say this is improper. What do you say?

[Srila Narayana Gosvami Maharaja:] Lord Nrsmhadeva can be there if he is in a different section (prakostha) of the altar, and if there is a curtain on the side, separating him from Radha-Govinda’s section – as in our Mathura matha.

[Question:] The devotees sing the prayers to Lord Nrsmhadeva after mangala arati is fully over, and after the curtains of the entire altar are closed.

[Srila Narayana Gosvami Maharaja:] The curtains may be kept open.

[Question:] Should there be lit candles on the altar?

[Srila Narayana Gosvami Maharaja:] Not always. Fire may come. Only during arotik.