We Are One Soul 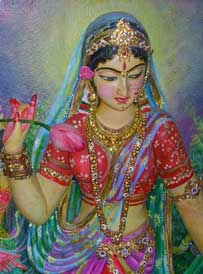 [This is the final class in the lecture-course on Srila Visvanatha Cakravarti Thakura's Prema Samput (The Treasure-chest of Love).]

All of you come with me to Vamsi-vata, where Sri Krsna disguised as a heavenly damsel is discussing the nature of pure love (prema) with Srimati Radhika. Please hear this conversation with great concentration.

Last night we heard that Srimati Radhika told Krsna, "Prema is indescribable. It can neither be understood by much deliberation nor by no deliberation; it is completely independent. Whoever receives the jewel of prema will either go mad, and he will not be able to remain in his material body.

Hearing these nectarean topics from the lotus mouth of Srimati Radhika, Krsna became happy. He very cleverly asked, "I see that all the symptoms of prema described by You are present only in You. They are not present in Krsna. I know this is true. I saw how, in separation from Him, You were weeping and rolling on the ground. All the other sakhis, as well as all the insects, birds and creepers, wept in sympathy for You. Seeing Your mood of separation, I felt as if My life force was going to leave Me.

"I don't believe this, because if He did this for Your happiness, why weren't You happy? Why did You lament and weep when He disappeared?"

Srimati Radhika said, "Sakhi, what You say is true. I wept in His separation, because He has such a power of attraction that when He left I couldn't control Myself."

Krsna disguised as a demigoddess replied, "You say that You completely understand the heart of Krsna. This must be true, but still I have a doubt. Does Krsna really understand your mind at all?"

Srimati Radhika replied, "This is a very confidential subject matter. In the same way that I am restless in the association of Krsna, for some reason I am attracted to You. Therefore, although I can't speak about this subject to anyone because it is so confidential, I feel inclined to speak to You."

Krsna said, "Oh Radha, please do not cheat Me. Do not hide anything from Me. I came here just to receive these answers from You."

Srimati Radhika said, "The common conception is that I am always in the heart of Krsna and He is always in My heart, and that We have a complete meeting of minds – we completely understand each other. Don't believe this; this is not true – this is a mistake.

"Here is the real fact: in a lake there is a lotus plant, and from the root of that plant two flowers are growing – one blue and one yellow. Those two flowers are not different from each other, because they have one root. In the same way, My blue cloth signifies the colour of Krsna's body and His yellow cloth signifies the colour of My body. There is no difference between us at all. We are one soul, and for the sake of tasting our astonishing pastimes we take two forms."

["The loving affairs of Sri Radha and Krsna are transcendental manifestations of the Lord's internal pleasure-giving potency. Although Radha and Krsna are one in Their identity, They separated Themselves eternally. Now these two transcendental identities have again united, in the form of Sri Krsna Caitanya. I bow down to He who has manifested Himself with the sentiment and complexion of Srimati Radharani although He is Krsna Himself. (Caitanya-caritamrta, Adi-lila 1.5)]

"We are not two. We are completely one."

The disguised Krsna said, "If everything You are saying is totally true and without fault – that You and Krsna are one – then You should have the power to bring Him here right now."

Srimati Radhika immediately closed Her eyes and became like a maha-yogini. She prayed, "O Krsna who is worshiped by the demigods, O Krsna who is the Lord of the three worlds, O Krsna who gives happiness to all life forms, O Krsna who is born from the lotus, O Paramatama, O My most worshipable Lord,*[see endnote 1] O Krsna, My friend! If We are one soul and there is no separation between Us, then please appear before Me right now to give Me happiness." Her eyes closed, Srimati Radhika engaged all Her senses in Krsna.

While Radhika's eyes were closed, Krsna removed the dress of the damsel, threw it away, and told Lalita and Visakha, "Don't say anything." Krsna embraced Srimati Radhika while Her eyes were still closed. She then opened Her eyes and became astonished, because She could now see Sri Krsna inside and outside of Herself.

She wiped the tears from Her eyes and said, "I was talking to a beautiful sakhi. Where has My friend gone?"

[At this time Srila Narayana Maharaja requested Tamal Krsna brahmacari to lead the 1000 devotees present in singing Srila Bhaktivinoda Thakura's kirtana, Ramani Siromani. After the song was completed, Srila Narayana Maharaja expressed his appreciation:] If Srila Bhaktivinoda Thakura was here, if he would have heard all that kirtana singing which was so sweet; Oh! He would have blessed you.

Tomorrow morning we will go to Madhuvana, Kumudvana and other pastime places. You should all come at 5.30 am and perform sankirtana. At about 6 am, after kirtana, you should at once go to your busses for departure. The busses cannot delay for even one minute; exactly at 6 they should leave. Anyone who does not come on time will be left behind.

During rasa-lila Krsna was dancing with millions upon millions of gopis, hand in hand with each gopi. The gopis sang in the seventh note and He called out, "Sadhu, sadhu, excellent, excellent." All the gopis thought, "Krsna is dancing only with Me." They became proud, which is natural for ladies who are favored by their beloveds, and Srimati Radhika entered a sulky mood. She thought, "Krsna is a cheater. He is dancing with all as He dances with Me. He previously told Me, 'Radhika, You are My most beloved,' but now I understand that He is a cheater."After Sri Krsna and Srimati Radhika disappeared and then all the gopis again met with them, they could understand, "We don't have even one speck of Srimati Radhika's prema." Her sulky mood was thus auspicious for everyone.

["Certainly this particular gopi has perfectly worshiped the all-powerful Personality of Godhead, Govinda, since He was so pleased with Her that He abandoned the rest of us and brought Her to a secluded place." (Srimad Bhagavatam 10.30.28)]

The gopis who were not in Sri Radha's party thought, "This gopi is the best of all. Krsna has left all of us and taken Her alone."

Those in Her party could understand, "These footprints are Srimati Radhika's." They saw by some signs that Krsna had taken flowers to decorate Her hair, and to reach the topmost flowers He had been standing on His toes; therefore His footprints were now deep in the sand. After that they saw that there were only one set of footprints, because Krsna had carried Her, His most beloved. Lalita and Visakha became ecstatic thinking, "He has taken Radhika."

In the meantime Srimati Radhika was thinking, "My meeting alone here with Krsna is not good. All My sakhis have given their life for My service. Sakhis like Visakha and Lalita are qualified to be yutesvaris, group leaders, as I am, but they don't like to meet with Krsna independently. Only sometimes, for My happiness, they will meet with Him alone. I feel indebted to them. They should share this nectarean association with Us."

Srimati Radhika thus told Sri Krsna, "I cannot walk any further. Krsna, You can carry Me wherever You like."

Krsna thought, "This is a problem." He knew the other gopis (those who were not in Radha's party) were approaching, and He considered, "If the other gopis see Me alone with Radhika, they will become angry and envious. They will all go back to their houses and there will be no rasa-lila."

Krsna therefore decided to disappear for a short time. He thought, "Of course Radhika will experience some unhappiness for some time, but then there will be rasa-lila and everyone will be happy."

He thus disappeared, and when He did so, He came to Imlitala and lamented for Srimati Radhika.

["I worship the lotus feet of that form of Sri Krsna when, due to being thoroughly immersed in separation from Srimati Radhika (who is displaying mana, Her sulky mood, His own dark complexion vanishes and He assumes Her bright, golden luster; or I worship the lotus feet of Sri Krsna as He is embraced by Srimati Radhika (after Her mana has broken). (Sri Radha-Vinoda-Vihari-Tattvastakam, verse 1)

His form remained the same, but by thinking so deeply about Srimati Radhika His complexion changed to a golden colour.

Meanwhile, all the gopis came here, to the bank of the Yamuna, and sang Gopi-gita. [Srila Narayana Maharaja was giving this discourse in Gopinatha Bhavana, which has the Yamuna flowing in its back yard. For this reason he used the word 'here'.] Hearing their singing Krsna could not tolerate their separation, and He finally appeared in their midst.

Some of the gopis caught His hands, some caught His feet and some ate His tambula remnants. One gopi stood farther away and, biting Her lip, appeared very angry at Him. This was Srimati Radhika.

Sri Krsna answered, "I am not the first type. 'I love you if you love me' is simply a business mentality. That person who loves others, whether others love him or not, is exemplified by Guru or mother or father. This is unconditional love. 'The lover who doesn't care if others love him or not' is further divided into four types: atmarama (self-satisfied), apta-kama (satisfied with whatever one has), guru-druhah (against Guru or superiors) and akrta-jna (ungrateful).

Krsna continued, "I am not atmarama (satisfied within, with his own atma inside), because You are My atma (soul). It is for this reason that I have called all of you to dance with Me. I am always in your heart, and this shows that I am not atmarama. I am not apta-kama, without desire. If I had no desire, why did I would I have called you all for rasa-lila? I am also not ungrateful, because I feel greatly indebted to Your service."

["O gopis, I am not able to repay My debt for your spotless service, even within a lifetime of Brahma. Your connection with Me is beyond reproach. You have worshiped Me, cutting off all domestic ties, which are difficult to break. Therefore please let your own glorious deeds be your compensation." (Srimad-Bhagavatam 10.32.22)]

Krsna concluded, "I do not belong to any of these nine groups. I disappeared to increase your loving meditation on Me, and to thus increase your happiness."

[* Endnote 1 – Srimati Radhika really feels this way, but still She is not in the mood of opulence (aisvarya). She is in the mood of sweetness (madhurya), thinking Sri Krsna an ordinary boy, Her beloved. A lover may naturally think this way about Her beloved sometimes, because she considers him to be all-in-all.]