The Island of Separation 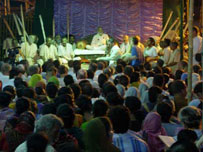 Today is the fifth day of our parikrama, and by the mercy of Sri Guru and Gauranga we have experienced no difficulties at all. Our parikrama has been progressing in a very happy way.

When Rama, Sita and Laksmana left Ayodhya and went to dwell in the forest, they came to this place called Mamagachi. There was a large banyan tree here at that time, but in separation from Lord Ramacandra it has since disappeared.

One day Lord Rama was standing near that tree and contemplating something, smiling very sweetly and gently. Sita asked Him, "Oh Prabhu, why are You smiling? What is the cause?" Ramacandra said, "Listen Devi; Kali-yuga (the Iron Age of quarrel and hypocrisy) is coming very soon. At that time I will appear in the form of Sacinandana Gaurahari, and You will appear with Me in the form of Sri Visnupriya. I will take sannyasa and enter the forest. You as Visnupriya will remain here in Navadvipa and weep in My separation, and You will worship a Deity of Me."

Sita-devi asked, "Oh Prabhu, why will You take sannyasa?" Rama replied, "Prema has two sections: meeting (sambhoga) and separation (vipralambha). Separation nourishes and increases the happiness of meeting. In My pastimes as Rama, I will send You to the forest and You will stay in the asrama of Valmiki Rsi. I will stay here in Ayodhya and worship You in a golden Deity form."

It appears that Rama left Sita, but by mind He did not. He was always thinking of Her. He never married again. He performed sacrifices for 16,000 years, and each year He sat beside a new a golden Sita deity He had made. Common people think that Lord Rama was happy and that there was actual separation between Rama and Sita, but this was not true. Externally there was separation, but internally They were never separated.

That vipralambha-rasa (transcendental mellow of separation) was also tasted in the pastimes of Lord Sri Krsna. Sri Krsna remained in Vrndavana until His adolescence, after which He went to Mathura. At that time all the Vrajavasis felt extreme separation from Him. Tasting parental love and desiring Krsna's return, Mother Yasoda and Nanda Baba wept so bitterly that they became almost blind – but Sri Krsna did not return. And what to speak of the separation of the gopis, who are the personification of conjugal love. Somehow or other the Vrajavasis maintained their lives with the hope: "Krsna will return the day after tomorrow." In this way they maintained themselves.

The separation pastimes of Sri Caitanya Mahaprabhu are even more intense than this.

When Sri Krsna comes to this world, there is a long separation. In Goloka Vrndavana, however, that kind of separation is not present. The question comes: why did Krsna, Rama and Mahaprabhu manifest this type of separation in this world? The answer is that by thinking, hearing and speaking about those pastimes of separation, one gradually attains bhakti-rasa (pure devotion) and enters the eternal pastimes of the Lord.

Navadvipa is the place of intense separation. Here, the residents of Navadvipa experienced the suffering of separation to the extreme extent. At the age of twenty-four Mahaprabhu went to Nrdaya-ghat on the bank of the Ganga, swam to Katwa and took sannyasa. He left Visnupriya and Saci-mata at home, weeping in separation. How fortunate we are to visit these supremely holy places, where we can take the dust and hear the pastimes that were experienced there.

Tomorrow there will be a fire sacrifice here in the temple at 3:00 pm. Men who have taken diksa should shave their heads and have a sikha, but ladies should not.