Meeting by the Ocean 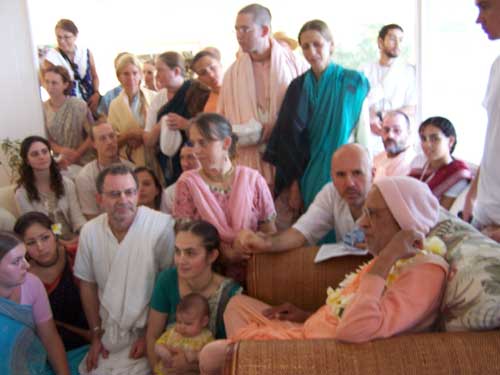 [The January 2007 Hawaii festival was held on the island of Hawaii. There, Srila Narayana Maharaja stayed in a rented house on the ocean for one week. Almost every morning he met with devotees and also replied to any of their inquiries. Below is one such meeting:]

[Devotee:] So, a new devotee, someone who is just beginning to practice, should not try to practice raganuga? It will naturally come?

[Srila Narayana Maharaja:] They should hear hari-katha. By hearing they should gradually begin vaidhi-bhakti, and then gradually they will become qualified for raganuga.

[Devotee:] Are any of us qualified for raganuga-bhakti?

[Srila Narayana Maharaja:] I think they will become qualified.

Do you want to go to Vaikuntha to serve Lord Narayana?

[Srila Narayana Maharaja:] Do you want to go to Dvaraka to be a queen?

[Srila Narayana Maharaja:] Do you want to go to Mathura?

[Devotee:] No. I want to be a servant of Radha.

[Srila Narayana Maharaja:] This is raganuga, because greed has come. [*See endnote 3] To those who come to me, I give a very powerful injection that will never go in vain. This will gradually take them up to radha-dasyam (personal service to Srimati Radhika). But they must follow. It has been told in Bhagavad-gita:

[“Just try to learn the truth by approaching a spiritual master. Inquire from him submissively and render service unto him. The self-realized souls can impart knowledge unto you because they have seen the truth.” (Bhagavad-gita, 4.34)]

Intellectually knowing everything of the philosophy will not suffice. If one knows all the scriptures, like Srimad-Bhagavatam, the Puranas, the Vedas, Bhakti-rasamrta-sindhu and Ujjvala-nilamani, but if he cannot satisfy his Gurudeva, his erudition has no value. On the other hand, even if one does not have much scriptural knowledge, but he always satisfies his Gurudeva, it is certain that he will become qualified.

[“Anyone who faithfully hears or describes the Lord's playful affairs with the young gopis of Vrndavana will attain the Lord's pure devotional service. Thus he will quickly become sober and conquer lust, the disease of the heart. (Srimad-Bhagavatam 10.33.39)]

The word 'anusrnuyad' in this verse means that the disciple will hear from Gurudeva. Then, by serving and pleasing him, he will become qualified to speak and preach. If a well-learned person is preaching but is not pleasing Gurudeva, he is not qualified. His speak ing will not produce any good result.

[Devotee:] How do we continue to serve you when we leave here and go back to our normal lives?

[Srila Narayana Maharaja:] You should remember the hari-katha you are hearing this week. Try to understand it and incorporate it into your life. Always think about it, and do what I am telling in my hari-katha.

[A guest, meeting Srila Narayana Maharaja for the first time:] How do I sever worldly ties and become free to come to the spiritual realm?

[Srila Narayana Maharaja:] The holy name is even more powerful then the Supreme Lord Himself. If you will chant the holy name, Krsna will mercifully arrange everything. You will have the time to engage more fully in Krsna consciousness. You should chant the very powerful holy name of Krsna.

[Devotee:] Because she is so new, she still eats meat. Can you tell her something to encourage her to give that up?

[Srila Narayana Maharaja:] You should know that within the word ‘meat’ there is ME-EAT – “those who I eat, will eat me." If you eat an animal in this life, that animal will eat you in the next. That may happen even in this life. The animals will surely take revenge. So don’t take meat, wine, eggs and fish – all are the same. Be careful to avoid this, beginning from today.

[Devotee:] Here is my Vyasa-puja offering. I am giving it to you now, because on Vyasa-puja day (4 days later) there will be so many people coming to you.

[Srila Narayana Maharaja:] All can come. I am the father of all of you. The father has affection for all his children, so don’t be fearful.

[Devotee:] Are the scriptures of other religions also sabda-pramana (transcendental evidence)?

This is true for Muslims also. It is not written anywhere in the Muslim scriptures: "Those who do not follow Mohammad are the enemy, and you should kill them.” This is not written anywhere in the Koran. Some Muslim leaders want the entire world to become Muslim and chant Allah, Huda – by force. In the Koran it has been written that Allah has a form, and according to that form He created man – but the so-called followers don’t agree.

[Devotee:] Do you still have affection for me, even though I am acting so bad?

[Srila Narayana Maharaja:] Try to make it rasastha (flavorful), as others have done and as I have done. Always be happy, sinking in the ocean of Radha-Krsna’s love. Do as the other devotees are doing. Give your entire energy to that, and be happy. If you do not give your energy to that, your energy will automatically go to sense gratification – and then you cannot be happy.

[Devotee:] But the pulling is so strong.

[Srila Narayana Maharaja:] Be like us, and be happy. You should control your mind and heart.

Endnote 3: Of all the one-pointed devotees of the different incarnations of the Supreme Lord, the parama-prematura bhaktas, those desirous of the highest prema, whose hearts have been stolen by Sri Nandanandana, are the topmost. Even the grace of Laksmipati Sri Narayana, the Lord of the paravyoma, cannot attract their minds. Although there is n o difference between Sri Narayana and Sri Krsna in terms of tattva, Sri Krsna form is superior due to the superexcellence of prema-rasa. The very nature of rasa itself reveals the supreme excellence of the form of Sri Krsna. The ultimate climax of prema-rasa is found only in the condition of mahabhava. The only object for this kind of rasa is Vrajendra-nandana not Maha-Narayana or other avataras. Therefore even Laksmi, who is always situated at the chest of Maha-Narayana, underwent severe austerities in order to obtain this extraordinary quality of rasa. (An excerpt from the purport of 4th verse of Sri Manah-siksa by Srila Narayana Maharaja]