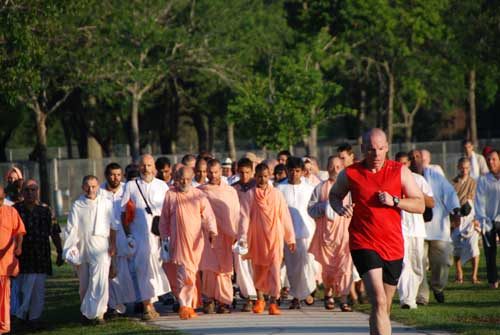 Srila Narayana Gosvami Maharaja: I am asking a question. Do you know why and how Brahmaji stole the friends and calves of Sri Krsna? Who will answer? Do you know?

Nitai-Caitanya dasa: I just know it is lila. Maybe he was testing Krsna?

Srila Narayana Gosvami Maharaja: You can hear from Padmanabha Maharaja.

Sripad Padmanabha Maharaja: Sri Krsna performs His pastimes for many purposes. By performing one pastime, He accomplishes many things. Ordinarily Lord Brahma would not have done such a thing, because he understands Krsna's position. He is the adi-guru, the first guru, in our sampradaya. By Yogamaya's potency, some questions came to his mind, "Who is this small cowherd boy? How can He be the Supreme?"

Sripad Madhava Maharaja: In Vraja, when Krsna used to return from cow-grazing, all of the motherly gopis would embrace Him with more affection than they would their own sons. They thought, "Mother Yasoda is always taking Krsna in her arms and sleeping with Him. If He were our son, we would be able to show Him our love in the way she does.

As the Supreme Personality of Godhead and thus knowing everyone's mind, Krsna considered, "I must fulfill their desires."

Srila Narayana Gosvami Maharaja: You left something out.

Sripad Madhava Maharaja: I was going to mention it.

Srila Narayana Gosvami Maharaja: Why didn't you tell it before?

Sripad Madhava Maharaja: While playing with His friends like an ordinary boy, He performed the pastime of killing Aghasura. Lord Brahma was passing by and thought, "Is Krsna the Supreme Personality of Godhead or just an ordinary boy?"

Srila Narayana Gosvami Maharaja: No. You still did not come to the point. He knew Krsna as the Supreme Lord. When Krsna killed Aghasura, Lord Brahma saw Aghasura's soul enter into Krsna's lotus feet. He thought, "How wonderful this is! I want to see more sweet pastimes." That is why he thought of stealing the calves and boys.

In the meantime, Krsna was thinking how to fulfill four wishes: (1) the desire of all of the teenage gopis; (2) the desires of the cows and mothers; (3) the desire of Lord Brahma; and (4) His own desire to taste the affection of these associates.

When Krsna was contemplating in this way, Yogamaya at once appeared to Him and said, "Prabhu, you are thinking about tasting these relationships, so I will arrange for this right away." This is why she caught hold of Brahma and brought him under her influence. She made this thought arise in him: "I am Brahma. I should steal away the cowherd boys and calves. Then I will see what He will do. Maybe He will come to me and ask where they are."

Brahma saw all the cowherd boys sitting together, with Krsna in the center, absorbed in laughing and joking and enjoying prasadam. By the influence of Yogamaya, Brahma thought, "This is the perfect time to steal the boys and calves." He created very green grass far away, and the calves became allured to go there and graze. At the same time Brahma stole them and put them in a cave.

Krsna told His friends, "Just wait here and take prasadam while I personally go to look for the calves." Then, as soon as Krsna left the cowherd boys, Brahma took them and put them in the cave, and then he returned to Brahma-loka.

Who were the calves and cowherd boys stolen by him? The real cowherd boys and calves are nitya-parikaras (eternal associates) of Krsna. Lord Brahma is not qualified to even touch the dust of their feet, what to speak of kidnapping them.

Actually, there were three sets of boys: The first set was the original cowherd-boys and calves. Yogamaya created the second set, which Lord Brahma stole, and Krsna personally expanded as the third set.

Brajanath dasa: Where did the first set stay when the illusory set was stolen?

Srila Narayana Gosvami Maharaja: Krsna told Yogamaya, "Please cover them in such a way that they will sit and take their meal, and the calves will graze as usual. No one, not even Baladeva Prabhu or any Vrajavasi, should see them."

Yogamaya thus covered the original cowherd-boy associates of Krsna for one year. No Vrajavasi could see them, and even Baladeva could not see them. When Krsna was with them, they had been eating yogurt and rice just as He was doing. Now that Krsna had left just as they were about to put their next morsel of prasada in their mouths, they began thinking, "We will not eat anything until our sakha, Krsna, returns to us. Being worried that we are not eating without Him, He will surely return very soon." In this way, for one year Yogamaya influenced their minds in thinking that Krsna would return in the very next moment, and this year passed for them like a moment.

Sripad Padmanabha Maharaja: Was this something like the rasa-lila in relation to time? Krsna's yogamaya potency expanded the rasa-lila to last for the duration of a night of Brahma, but the gopis experienced it to be less than a moment.

Brajanath dasa: When Lord Brahma went to his own planet, his guards questioned him, "Who are you?"

Srila Narayana Gosvami Maharaja: Lord Brahma said, "You are my guards. You do not recognize me?"

The guards replied, "You are not Brahma. Our Prabhu is on His throne and managing everything. He told us that if an imposter tries to come in, we should not allow him entrance.

Lord Brahma wondered, "Why is this happening?" Then, in his trance of meditation he realized, "I have made a mistake."

There is so much deep siddhanta in this pastime.

Sripad Padmanabha Maharaja: This brings a question: There is a similar occurrence in Rama's pastimes. The demon Ravana could not take the real Sita devi; he could only take an illusory Sita. We were discussing this in Alachua the other day. It was the illusory Sita who was taken by Ravana. The whole pastime of her residing in Ravana's kingdom took place with this illusory Sita. It was this Sita who was in the Asoka garden, feeling great separation from Lord Rama.

So the question is, how can an illusory Sita feel such separation?

Srila Narayana Gosvami Maharaja: Because she was created by Yogamaya, she had such power and mood. The illusory material maya, mahamaya, would not have been able to do something like this, but Yogamaya can do so.

Brajanath dasa: And the real Sita was protected by Agni all that time.

Srila Narayana Gosvami Maharaja: Later, when Lord Ramacandra finally met the real Sita, it seemed like only one second had passed.

Sripad Padmanabha Maharaja: Going back to Brahma-vimohana-lila, this brings a question. You mentioned that there were four reasons why Krsna performed this pastime. Of these, which is the main reason? Sri Caitanya Mahaprabhu had external and internal reasons for appearing, so is there any order in the reasons regarding this pastime with Brahma? The internal reason for Mahaprabhu's appearance was to taste rasa. Can we say there is a main reason for Krsna manifesting this pastime with Brahma?

Srila Narayana Gosvami Maharaja: Mahaprabhu's second reason was to give raganuga-marga, the third was because of Advaita Acarya's prayer, and the fourth was this:

["Whenever and wherever there is a decline in religious practice, O descendant of Bharata, and a predominant rise of irreligion, at that time I descend Myself." (Bhagavad-gita, 4.7)]

And there are so many other reasons.

Sripad Padmanabha Maharaja: Can we say that the main reason for brahma-vimohana-lila was for Sri Krsna to taste the vasalya-prema of all the cows and gopis?

Srila Narayana Gosvami Maharaja: Krsna externally performed this pastime to satisfy the desire of Lord Brahma, and internally to fulfill the desires of the young gopis, the mothers, and the cows.

This is very mysterious. What can you pay me for this? Only dandavat pranama?

Brajanath dasa: Srila Gurudeva, Vrnda has a question. Navadvipa is like Vrndavana. It is gupta, or hidden, Vrndavana. All rasas, namely, dasya (servitorship), sakhya (friendship), vastalya (parenthood), and madhurya (amorous love) are present in Vrndavana. Regarding Sriman Mahaprabhu's pastimes, all rasas must also be present. How is madhurya-rasa present in Mahaprabhu's lila?

Srila Narayana Gosvami Maharaja: Mahaprabhu is the gupta-avatara, the hidden incarnation. Everything is present within Him and His abode, but it is hidden. Vrndavana, Radha-kunda, Syama-kunda, Giriraja Govardhana, Nandagaon, Varsana, and all other pastime places are situated in Navadvipa, but in a hidden way. Only those who take shelter of an elevated Vaisnava and Sri Krsna can see this.

Vrnda-devi: How did Mahaprabhu experience madhurya-rasa if outwardly the sakhis and manjaris are not present there?

Srila Narayana Gosvami Maharaja: He does so by mind. Everything is eternally present there, although it is not manifest externally.

Sripad Padmanabha Maharaja: Srila Gurudeva, the other day you said that Krsna, in the form of Mahaprabhu, was fulfilling His three desires *[See Endnote 1] in a hidden way in Navadvipa; and when He took sannyasa and went to Puri with Ramananda Raya and Svarupa Damodara, He outwardly fulfilled These desires. So were His desires fulfilled, or not fulfilled, in Navadvipa? Did He have to take sannyasa to fulfill His desires?

Srila Narayana Gosvami Maharaja: Everything is already fulfilled in Mahaprabhu. He took sannyasa for the benefit of the jivas of the world. "Raga-marga bhakti loke karate pracarana – He wanted to propagate devotional service in the world on the platform of spontaneous attraction."

["Krsna manifests His eternal humanlike form and performs His pastimes to show mercy to the devotees. Having heard such pastimes, one should engage in service to Him." (Caitanya-caritamrta Adi-lila, 4.34)]

[*Endnote: "Desiring to understand the glory of Radharani's love, the wonderful qualities in Him that She alone relishes through Her love, and the happiness She feels when She realizes the sweetness of His love, the Supreme Lord Hari, richly endowed with Her emotions, appeared from the womb of Srimati Saci-devi, as the moon appeared from the ocean." (Sri Caitanya-caritamrta Adi-lila, 1.4)]