Can A Devotee Suffer? 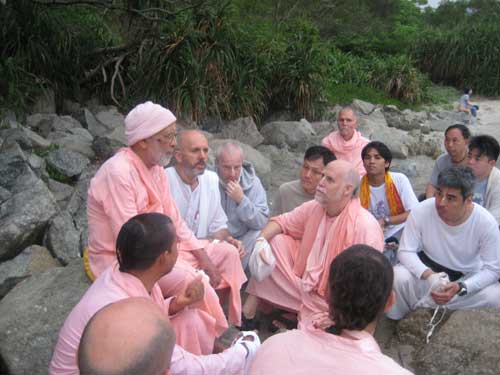 [Kamala Kanta dasa:] Some people think, “I am doing so much. I am chanting and following the process, but I am suffering.”

[Srila Narayana Gosvami Maharaja:]: This means that they are not really devotees. A pure devotee cannot think like this.

[Kamala Kanta dasa:] What about the madhyama (intermediate devotee), or the kanistha (neophyte devotee)?

[Kamala Kanta dasa:] In his commentary of the 10th Canto Srimad-Bhagavatam Srila Visvanatha Cakravarti Thakura gives three reasons why devotees suffer: to maintain the confidentiality of devotional service, and to not uproot the opinions of atheists. [Bhakti destroys prarabdha-karma, so the devotee never actually suffers or even grows old. To protect the confidentiality of bhakti and not disturb atheists, yogamaya gives the impression that Vaisnavas grow old and die like everyone else.] And the third, to increase the hankering of the devotee. Is this correct?

[Srila Narayana Gosvami Maharaja:] This is okay. Devotees who are chanting Sri Krsna’s name and practicing pure devotion to Krsna have no karma. For them, suffering and problems that come to them means that Krsna wants them to be humble and tolerant. Such devotees should think, “Oh, I am very wretched.” This humility will come. So, Krsna personally gives them this suffering. It is not the fruit of their karma.

[Sripad Giri Maharaja:] A devotee thinks that karma is not punishment; it is Krsna’s mercy?

[Srila Narayana Gosvami Maharaja:] Yes, he thinks in this way. He thinks it is coming by the mercy of Krsna.

[My dear Lord, one who earnestly waits for You to bestow Your causeless mercy upon him, all the while patiently suffering the reactions of his past misdeeds and offering You respectful obeisances with his heart, words and body, is surely eligible for liberation, for it has become his rightful claim. (Srimad-Bhagavatam, 10.14.8)]

He thinks it is both karma and Krsna’s mercy. He should tolerate all his sufferings, thinking, ‘Krsna has given me these sufferings for me to learn tolerance. One who is always offering obeisances to Krsna, by body, mind, and words, is happy and becomes an inheritor of bhakti.

[Sripad Madhava Maharaja:] If some senior devotees are speaking with each other, and junior devotees, without any consideration, start speaking, is this good or not?

[Srila Narayana Gosvami Maharaja:]: This is not right.

[Sripad Madhava Maharaja:] It is an offence?

[Srila Narayana Gosvami Maharaja:] It is not an offence – it is ignorance. He should wait. It means he was not raised in a good family. He has not learned proper etiquette.

[Uttama-krsna dasa:] Gurudeva, about the quality of karma: if I have a chance to beat somebody, does that mean that person previously beat me? For example, if he owed me $10 dollars, but didn’t pay me back. Is it like this?

[Srila Narayana Gosvami Maharaja:] No, we should tolerate, as Srila Haridasa Thakura was tolerant. He was beaten in twenty-two marketplaces, but he never said, “Don’t beat me.” Prahlada Maharaja was given poison, he was put in fire, and he was tortured in so many other ways. But he never thought, “I will take revenge against my father.” This is not Vaisnava etiquette.

[Sripad Padmanabha Maharaja:] What if that devotee is thinking, “Somebody is coming to kill me.” After all, this body belongs to Gurudeva.

[Srila Narayana Gosvami Maharaja:] You are not Prahlada or Sita-devi. You should try to escape, to save your life.

[Srila Narayana Gosvami Maharaja:] Maha-bhagavatas never run away. *[See endnote 1] They know that Krsna is present with them. They know that the Lord’s Sudarsana-cakra (His disc weapon) will come and finish that person.

[Yadunatha dasa:] The Pandavas were insulted, and it seemed that they fought back. Does this mean that they are not maha-bhagavatas?

[Madhava Maharaja:] Krsna made them instruments to remove the burden of the world.

[Srila Narayana Gosvami Maharaja:] Seeing all his relatives, Arjuna was thinking, “I cannot kill them. Begging is better than fighting for a kingdom and opulence. Why should I fight just for this kingdom?” Sri Krsna told him, “You should fight.” He inspired Arjuna to fight, but He never inspired Duryodhana.

Sri Krsna was the only cause of Arjuna’s fighting. Moreover, Arjuna did not fight to fulfill His own desire. He did not fight for the Pandavas. Whatever we do, it should be to please Krsna. There should be no other reason.

“The two rogues were now chasing the two saints and although they cried out, "Catch them! Catch them!" they were still not near them. Nityananda said, "My dear Vaisnava, Haridasa, we have got ourselves into a fine mess, we can call ourselves lucky if we come out of this alive!" Thakura Haridasa replied, "O Lord, what is the use of talking, acting on Your advice we now face unnatural or violent death. On account of You, we have given instructions on the Holy Name of Krsna to these two faithless drunkards and now we are earning our due reaction and punishment: death!"

“Speaking in this manner, Lord Nityananda and Haridasa continued to run laughing gleefully, while the two rogues chased after them, hurling loud abuse. The drunks' bodies were ugly and fat, so movement was difficult; yet, they continued to run after Haridasa and Nityananda shouting, "O brothers, where do you think you can go? How will you escape Jagai and Madhai today? You seem to not know that Jagai and Madhai move about in this area, so stay a while and get acquainted with this place nicely." These words further spurred on Haridasa and Nityananda and they kept chanting, "Save us Krsna! Save us Krsna! O Govinda!"

“Haridasa said to Nityananda, "Lord Krsna saved me sometime back from the cruel hands of my Muslim tormentors, but today due to my companion's restless nature and lack of mature intelligence I am about to face my final end."

“Lord Nityananda replied, "You are incorrect, this restlessness is not My real nature, it is manifesting in this manner due to the spiritual ecstasies of your master, Sri Caitanya. Although He is a brahmana, He is relaying orders like some king! By His orders, we go from door to door, although I have never heard of anyone else giving such kind of orders. In the process of executing His order, our only remuneration is harsh abusive words and false accusations by the people. If we do not carry out His orders then we are finished and if we do then this present dilemma is our answer. As for blaming someone for all this, you single Me out, but in fact your master has also a share in this!"

“The two carried on their verbal mock fight with each other with great pleasure whilst still being chased by the two drunken rogues. Running, they went in the direction of Srivasa Pandita's house and the two rogues were left behind to run around in circles confused by intoxication. The two rogues were confounded looking in all directions. They had no idea where the two saints had gone; they just gave up the chase and went about shuffling.

“Nityananda and Haridasa after a little rest turned back to check if the rogues were still chasing them. They got up, embraced each other in laughter, and went to see Sri Caitanya.”]