Please accept our humble obeisances. All glories to Sri Guru and Gauranga. You will be happy to know that this year's Gaura-purnima festival and Navadvipa-dhama parikrama were very successfully completed, and the beautiful temple-complex of the Deities Sri Sri Radha-Vinoda-bihari, Sri Caitanya Mahaprabhu, and Sri Laksmi-Varahadeva at the Sri Kesavaji Gaudiya Math in Koladvipa is about eighty percent completed. About one-thousand Western devotees attended Srila Narayana Gosvami Maharaja's Navadvipa Parikrama festival this year, and about fourteen or fifteen thousand Bengali and other Indian devotees attended.

On March 4th news came of the disappearance of Srila Bhaktivaibhava Puri Maharaja. Upon hearing this news Srila Maharaja immediately sent two representatives to Jagganath Puri to attend the samadhi ceremony on his behalf. 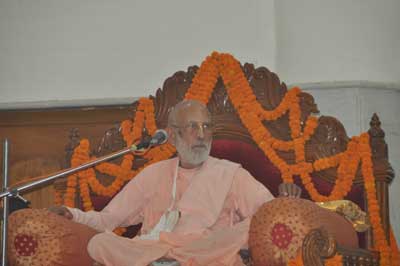 In his classes on the days preceding Gaura-purnima, Srila Narayana Gosvami Maharaja talked about the superiority of Navadvipa dhama over all other abodes of the Lord in this world, and he also spoke about Mahaprabhu's abodes of Navadvipa, Jagannatha Puri, and Godavari corresponding to Sri Krsna's abodes of Vrndavana, Dvaraka, and Kuruksetra. Because Sri Caitanya Mahaprabhu is Sri Krsna covered by the complexion and ecstatic sentiments of Srimati Radhika, Srila Maharaja also talked about Mahaprabhu's moods in Navadvipa, Puri, and Godavari corresponding with Srimati Radhika's moods in Vrndavana, Uddhava Kyari (when Krsna was in Mathura and Dvaraka), and Kuruksetra. Srila Maharaja spoke in Bengali, not English. Therefore, in order that we can provide you with his harikatha on this subject, we are sending two very similar classes, which he spoke in English in previous years. By reading these classes, you will understand what he spoke about in Navadvipa this year. Today you will receive the first class, and in a few days you will receive the second:]

What is the glory of Navadvipa? The original Supreme Personality of Godhead Sri Krsna appeared in this world and performed His astonishing pastimes in Vrndavana. Yet, all of His desires were not fulfilled at that time. Those desires that were not fulfilled by Him during His pastimes in Vrndavana were fulfilled when He appeared here in Navadvipa-dhama in the form of Sri Caitanya Mahaprabhu. In Vrndavana He tasted prema (pure love of God) as the object of the prema of His devotees, but He did not know how the devotees felt in their love for Him. He could not taste what they experience in their loving mood. Also, in Gokula (Vrndavana manifest in this world), He did not distribute prema to one and all. It is only here in Navadvipa-dhama that He - as Sri Caitanya Mahaprabhu - so freely distributed it. He tasted the prema of the reservoir of love, His devotees, and especially Srimati Radhika, and He also distributed prema - especially the prema of Radhika's maidservants. 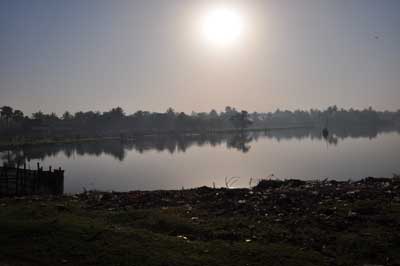 Not only did Sri Caitanya Mahaprabhu distribute this to the devotees who had become qualified by their practices, but even to those who were fallen and offensive. When He was on His way to Vrndavana He came to Kasi, and there He gave mercy to the leader of the mayavadis, Prakasananda Sarasvati - and not only to him, but also to his sixty-thousand sannyasa disciples.

He is the most merciful incarnation. In other incarnations, if anyone was opposed to Him, He would take up His weapon and kill him. But Sri Caitanya Mahaprabhu never did so. Rather, He purified the hearts of the offenders through the chanting of the holy names and bestowed upon them love of God. Here in Navadvipa-dhama, He gave His mercy to the most sinful Jagai and Madhai, and to so many others. He caused an inundation of transcendental love and made everyone dance.

After taking sannyasa, Caitanya Mahaprabhu went to Jagannatha Puri, and there He met with Sri Sarvabhauma Bhattacarya, who was a leader of the mayavadis, those who are very much antagonistic to the cult of pure devotion. He also gave mercy to him and converted him. When He was in South India, traveling here and there, He was so merciful that all the living entities, even those who saw Him from very far away, became overwhelmed with prema.

So many pastimes of Sri Caitanya Mahaprabhu took place here in Navadvipa. He also spent many years in Jagannatha Puri. He also went to South India, to the bank of the Godavari, where He met with Sri Raya Ramananda and had very confidential discussions. Of these three abodes of the Lord - Navadvipa, Jagannatha Puri, and Godavari - which one is superior? Nowadays there is a great deal of confusion about this topic. Many people have a wrong understanding, because the real philosophical conclusion is very deep and difficult to understand.

Navadvipa-dhama, where we have now come, is the highest.* This place is superior to both Jagannatha Puri and Godavari. Why? There are so many reasons.

Someone may say that Jagannatha Puri is the highest place, because it was there in the Gambhira that Mahaprabhu relished vipralamba rasa (Srimati Radhika's separation mood for Sri Krsna) and fulfilled His three desires. But Jagannatha Puri is a manifestation of Dvaraka Puri. Sometimes, according to Mahaprabhu's mood, He would also see it as Kuruksetra and become absorbed in the meeting of Radha and Krsna there. We cannot say that it is Vrndavana. In Vrndavana there are twelve forests, such as Vrndavana, Kumudvana, Bahulavana, Kelanvana, etc. Where are they in Jagannatha Puri? We cannot find them. On the other hand, here in Navadvipa-dhama, all the twelve forests of Vrndavana are present. This place in which we are now situated is called Koladvipa. Koladvipa is non-different from Giriraja-Govardhana, and very close by is Syama-kunda and Radha-kunda. Where are Syama-kunda and Radha-kunda in Jagannatha Puri? Very close by here is Panca-veni, which is superior to Prayag. At Prayag the Yamuna, Ganga and Sarasvati rivers meet. But here, Yamuna, Ganga, Sarasvati, Alakananda, Godavari, Kaveri, Sindhu, Narmada and all the other holy rivers meet. We call that place in Navadvipa, Panca-veni, the meeting of five holy places or holy rivers, but don't think there are only five. Thousands upon thousands - all the sacred rivers - have descended and are meeting together here at Panca-veni in Navadvipa. In Jagannatha Puri the ocean is a maha-tirtha (great holy place), because Caitanya Mahaprabhu bathed the transcendental body of Srila Haridasa Thakura there. But even the ocean came here to Navadvipa-dhama at Samudragadha. So this place is superior to Prayag.

Navadvipa-dhama is called gupta (hidden) Vrndavana, because all the pastime places of Vrndavana, like the rasa-sthalis (the areas of the rasa dance), Giriraja-Govardhana, Syama-kunda, Radha-kunda - all twelve forests - are here in a hidden way.

Another reason for the superiority of Navadvipa-dhama is as follows. Even though Jagannatha Puri and Godavari are very elevated, transcendental abodes, the pastimes there are aisvarya-mayi-lila (pastimes in opulence and majesty). There, Sri Caitanya Mahaprabhu was worshipped as God. In Godavari He manifested His form as Rasaraja-mahabhava, Sri Sri Radha and Krsna combined as one, and this pastime is also aisvarya-mayi-lila.

In Jagannatha Puri He performed pastimes in the Gambhira, but only Sri Svarupa Damodara, Sri Raya Ramanada, Sri Sikhi Mahiti and His sister Srimati Madhavi devi - three-and-a-half intimate associates - could take part. Here in Navadvipa-dhama, on the other hand, His pastimes are madhurya-mayi-lila (sweet, human-like), not aisvarya-mayi-lila. Here, Sri Sacinandana Gaurahari meets in lokika sadbhanduvat sambhanda (natural, family-like relationships) with all the residents. When we try to understand if a particular pastime is superior to others, the ultimate measure is whether that pastime is purely madhurya. Madhurya-lila are those pastimes resembling sweet, human-like activities with human-like relationships, without any trace of the mood of aisvarya. And, even if any of those pastimes would be full of opulence, they would be seen as human-like by the Lord's associates.

Thus, this dhama is so exalted and extraordinary, superior to every other place of Mahaprabhu's pastimes.

["With great longing I worship all the living entities of Vraja including the grass, bushes, flies, and birds, which are filled with transcendental bliss. Their fortune is so great that it is aspired for by personalities like Sri Brahma and Uddhava. Srimad Bhagavatam and other sastras have repeatedly and clearly propounded their glories. They are very dear to Sri Mukunda and assist in His pastimes." (Raghunatha dasa - Stavavali, Vraja-vilasa-stava, 102)]

"I pray to all the living entities of Vrndavana, including the grass, bushes, insects and birds." This verse is also applicable to Navadvipa-dhama. Every living entity here - every tree and creeper - is sat-cit-ananda, made of eternity, full knowledge and bliss, and they assist the Lord's pastimes. Therefore, even great personalities such as Lord Brahma have prayed to become stones and blades of grass in such an unprecedented and transcendental abode.

Sri Caitanya Mahaprabhu lived here in the house of Sacimata in Mayapura, in Antardvipa. He performed His pastimes here, and after twenty-four years, He took sannyasa and went to Jagannatha Puri and so many other places. However, even when He took sannyasa and appeared to leave this dhama, He was still present here. Only those who are extremely fortunate and whose love is mature can realize how He always performs His pastimes here in this transcendental place, and how He never leaves.