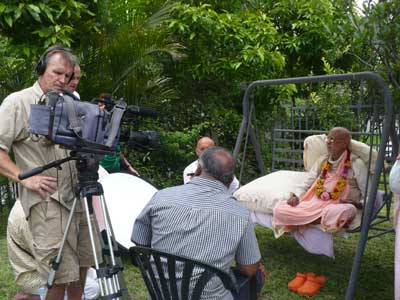 [The director of a very popular South African television program, called Dharma Moments, came with his cameraman to the residence of Srila Narayana Gosvami Maharaja to interview him for their program. They first filmed the devotees chanting the maha-mantra, and then went into the garden to interview Srila Maharaja. Charles Pillay, the director of the show, asked the questions, Srila Maharaja replied in Hindi, and Sripad Damodara Maharaja translated:]

[Charles:] What does it mean to be following in your guru’s footsteps?

[Srila Narayana Gosvami Maharaja:] Before I came to serve the mission of my Gurudeva full-time, I was a police-officer. I had the good fortune to meet the disciples of Srila Bhaktisiddhanta Sarasvati Thakura, who preached the message of sanatana-dharma throughout India and the entire world. I met one of his main disciples, Sri Narottamananda brahmacari, where I was residing in Tiwaripur. Hearing his lecture, I became so attracted that I left my house, wife, and children, and moved into the temple. After this, I received so many teachings from my spiritual master.

Then I took initiation from him, and from him I could understand the guru-parampara and the necessity of the disciplic succession. From him I heard that we are not this material body. Under the misconception that, “I am this body,” the souls of this world have completely forgotten their relationship with Krsna. Because of this forgetfulness they are constantly transmigrating throughout thousands of cycles of creation and dissolution, and they are not able to find any happiness. From this guru-parampara, and hearing the teachings of my spiritual master, I understood that the goal of life is devotion to the Supreme Lord Krsna and going back to God, back to home.

This guru-parampara began with the Supreme Lord Krsna Himself. He instructed His teachings to the first created being, Brahma, Brahma instructed his disciple, Narada, Narada to his disciple, Vyasa, and in this way the teachings came down to Sri Caitanya Mahaprabhu, the six Gosvamis, Srila Narottama dasa Thakura, Sri Srinivasa Acarya, Sri Syamananda, Srila Bhaktivinoda Thakura, Srila Bhaktisiddhanta Sarasavati Thakura, then to my Gurudeva, and I am receiving these teachings from him. I am now traveling throughout large and small countries, and giving people the chance to hear this same message of sanatana-dharma.

Hearing these instructions I left everything, moved into the matha, and gradually began engaging in giving this message to others. By following the programs in the matha, I could appreciate the great benefit I was receiving, and that by instructing others there would be so much benefit for them. With this intention I am traveling the entire world, giving this message that I heard from my Gurudeva.

[Charles:] Each country you go to has a different way of living, a different cultural heritage, and different problems. How do you think your message will be geared towards South Africans?

[Srila Narayana Gosvami Maharaja:] No matter which country I go to, I find that many people are wealthy, and they have big positions like chief ministers or advisors in the government. Despite having such good positions, however, they are desperately unhappy and many even commit suicide. Despite having vast wealth, large families, good positions in society, and great opulence, still they are not happy.

I tell people, “You cannot be happy by eating nicely and having nice clothing and possessions. Death comes to all, and with death comes so much suffering.” When people hear this from me, they develop faith and give up all bad habits like drinking, smoking, meat-eating, and garlic and onions.

I instruct them to chant the name of Krsna, which is Krsna Himself. There is no difference between God and His names – Hare Krsna. His names are is very powerful. In fact, Krsna has invested all of His power, mercy, and qualities in these three names, or sixteen words. Therefore, these names can do what Krsna can do. They can give liberation and they can take us to Goloka Vrndavana. In Vrndavana, Krsna will engage us in the service of Srimati Radhika and Himself, and thus we will be happy forever.

Everyone who meets me and begins chanting the names of Krsna says the same thing: “By chanting I am happier than ever before.” We find this in all countries, including America, South America, Malaysia, Australia, Russia and China. In fact, we find that in Russia and China people are more receptive than in most other countries. So many people have come to me. I have made many of them full-time celibate monks, and now they are also traveling around the world and spreading this message.

[Charles:] In South Africa, we focus on the problems that we have – HIV/AIDS and crime being the topmost on our minds. What would be your message for South Africans in order that they may lead a happier life; so they can release themselves from thinking about these problems?

[Srila Narayana Gosvami Maharaja:] Devotees who are with me have given up all criminal activity, all bad habits, and all kinds of wicked acts – naturally and automatically. One who is engaged in bhakti, devotion to the Lord, has no time for any other activity, so they automatically give up bad habits. They are happy, and by their association and instructions they are making others happy.

[Charles:] What can we do to change to mindsets of those who are causing pain to others, so that they become people who bring happiness to others?

[Srila Narayana Gosvami Maharaja:] The problems of this world, such as crime, can only be stopped by the preaching of the glories of the Supreme Lord. We have to understand why people are performing such activities like beating others, killing others, and stealing others’ money. They are doing this with one intention – to become happy. We tell them, “No one can be happy by material activities.” The individual spirit souls will become happy only if they keep the Supreme Lord in the center of their lives and perform all of their endeavors to please Him.

We request everyone to advertise this in the newspapers, television, house-to house, and person-to-person. Everywhere we go we invite thousands of people to attend our programs. Those who come and hear are fortunate, and those who do not come are unfortunate. Even though we offer delicious food to the people who come, still most people are so unfortunate that they do not come. Five-hundred to one thousand people come to hear us, but when a politician gives a speech, hundreds of thousands of people go to listen. For the politicians there is so much reporting, loud speakers, and coverage in the press – that is the situation in the world today.

[Charles:] If there is one mantra and one verse from scripture that can actually be used to bring happiness to the world and change the mindset of the people, what would this mantra and verse be?

[Srila Narayana Gosvami Maharaja:] “Hare Krsna Hare Krsna Krsna Krsna Hare Hare, Hare Rama Hare Rama Rama Hare Hare.” This mantra is very influential; it will change everyone’s mindset. You should chant “Hare Krsna, Hare Krsna” for at least one day. First do this yourself, and then tell others to chant. Then, automatically, they will give up meat, eggs, wine, drinking, smoking, crime, and all other bad habits.

[Charles:] Is there one verse from BG that is sufficient to bring happiness to people?

[“Abandon all varieties of religion and just surrender unto Me. I shall deliver you from all sinful reactions. Do not fear.” (Bhagavad-gita, 18.66)]

Krsna says in the Bhagavad-gita, “One should give up all impious, and even materially pious, activities. Giving up everything, one should be one-pointed in My service. Thus, I will deliver you from sinful activities and you will be happy forever.”

[Charles:] Before you leave, can we film all the devotees sitting here, as if you are giving them a lecture?

[Dear Harikatha Readers, In order to read what Srila Maharaja’s tells his disciples at this time, please stay tuned for a near-future harikatha.]