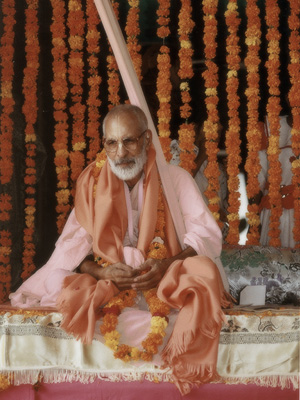 [The following is a "vintage class" given by Srila Maharaja. This class was given in order to establish the position and glory of of Srila Prabhupada Bhaktivedanta Svami Maharaja. ]

There is a difference between rupanuga [*Endnote 1] and raganuga [*Endnote 2]. Those who are in this world and serve Sri Sri Radha-Krsna on the path of raga (loving attachment), following in the footsteps of the ragatmika-bhaktas who are described by Srila Rupa Gosvami in Sri Bhakti-rasamrta-sindhu and Sri Ujjvala-nilamani, all are raganuga.

Those who follow Srila Rupa Gosvami’s Bhakti-rasamrta-sindhu and are under the guidance of Krsna’s cowherd friends (sakhas), like Subala, Sridama and all others, and who want to serve Lord Krsna like the sakhas – will not be called rupanuga. They will be called raganuga.

Lalita and Visakha and Yasoda-maiya are neither raganuga nor rupanuga. They are not “anuga”, followers. Those who are siddha, perfect, liberated associates, and are serving Radha and Krsna in Vrndavana are called ragatmika [*Endnote 3]. Those who want to serve Lord Krsna like them are called sadhakas (practitioners). Thus following raga-marga (the path of raga) they are raganuga. If one follows this path, inwardly mediating, “How can I serve Lord Krsna like Mother Yasoda or Nanda Baba?” he will be called raganuga, not rupanuga. Srila Rupa Gosvami has explained the glory of all these relationships in Bhakti-rasamrta-sindhu. Still, they will not be called rupanuga.

Rupanuga is the following of the way in which Sri Rupa Manjari serves both Radha and Krsna – being more inclined towards Srimati Radhika – happy in the happiness of Srimati Radhika and suffering like Her when She suffers. A person who follows in such a way can be called rupanuga.

Parama-pujyapada Srila Svami Maharaja has come especially to give this – rupanuga-bhakti. He did not come only to give raganuga-bhakti, nor did he come only to give vaidhi-bhakti. He could not give this to his general disciples at that time, however, because most of them were not in the stage to understand. Even now I am endeavoring with great labor to make you understand, but still only a few are trying to understand. About 25 years ago, when Srila Svami Maharaja went to America to preach, how could he openly preach this topic? There was practically no one qualified to understand – and thus he was mostly engaged in cutting jungles.

The entire disciplic-succession of our Gaudiya mission is rupanuga. The sampradaya of Srila Nimbarkacarya is raganuga, but of Dvaraka – of Satyabhama and Rukmini. His followers are not like Srila Rupa Gosvami. Only the acaryas coming in the line of Sri Caitanya Mahaprabhu are rupanuga.

Srila Svami Maharaja came to give what is already in each soul.

The soul is perfect in itself. The soul’s relation with Krsna, its name, qualities and all specialities, are already present within. This perfection is not brought from outside. Unfortunately maya covers it, but Sri Guru removes that maya and then everything manifests automatically.

This pure prema will not come by any efforts or any sadhana. What is there will come out; no new thing will come. No type of association can change what is already in the soul.

What is in your soul will manifest by sravana (hearing), kirtana (chanting) and smarana (remembering). Whatever rasa is in the soul will manifest. If it is dasya-rasa, then dasya-rasa will manifest. It is a fact that if someone is in madhurya-rasa, he will have only a little taste for dasya or sakhya-rasa. This will automatically come – it will come when our anarthas will disappear.

It is sometimes misunderstood that Srila Svami Maharaja was only in sakhya-rasa, and that he cannot give madhurya-rasa. This is not a fact. He came only for spreading the same mission to the world that was brought by Srila Rupa Gosvami.

He has not come only to give vaidhi-bhakti.* [See Endnote 4] We will have to perform vaidhi-bhakti, of course, and by this, bhakti will manage everything. Bhakti is not only a quality – she is not nirvisesa, impersonal. She is a person. Krsna is controlled by prema-bhakti. Krsna, and Srimati Radhika, and all Their associates, are controlled by bhakti. Bhakti can make Radha dance, Krsna dance, the gopis dance, and bhakti herself dance. She makes all dance.

Sri Caitanya Mahaprabhu first of all inspired all spiritual truths in Srila Rupa Gosvami's heart, as well as all knowledge of the Vedas, Upanisads and all other scriptures. Then, by the Lord´s mercy, Srila Rupa Gosvami knew His heart:

[“When will Srila Rupa Gosvami Prabhupada, who has established within this material world the mission to fulfill the desire of Lord Caitanya, give me shelter under his lotus feet?"]

Srila Rupa Gosvami explained, "There are two processes of practical devotional service. One is regulative devotional service, and the other is spontaneous devotional service." (Caitanya-caritamrta Madhya-lila 22.108)] Those who follow the path of raganuga in any rasa other than manjari-bhava in madhurya-rasa are rupanuga, but not so much – partly, very partly. In fact, it can also be said that they are not rupanuga. (Srila Narayana Maharaja’s lecture of May 18, 2004; Badger, California)]

2. “Consequently we always request members of the International Society for Krishna Consciousness to publish as many books as possible and distribute them widely throughout the world. By thus following in the footsteps of Srila Rapa Gosvami, one can become a rupanuga devotee.” (Purport Sri Caitanya-caritamrta Madhya-lila 19.132)

4. “Rupa Gosvami and Sanatana Gosvami are the most exalted servitors of Srimati Radharani and Lord Sri Caitanya Mahaprabhu. Those who adhere to their service are known as rupanuga devotees.” (Mad.8.246 Purp.)

5. “Unless you become rupanuga, you cannot understand the Gaudiya philosophy.” (Vrnd. Oct. ’72 lecture)

1. “One has to serve Krsna according to these regulative principles, but if one develops spontaneous love for Krsna as exhibited in the activities of those who live in Vrajabhumi, one attains the platform of raganuga-bhakti. One who has developed this spontaneous love is eligible for elevation to the platform enjoyed by the inhabitants of Vrajabhumi. In Vrajabhumi, there are no regulative principles set forth for Krsna's service. Rather, everything is carried out in spontaneous, natural love for Krsna." (Sri Caitanya-cartiamrta, Madya 8.221 purport)

2. "When one becomes attached to the Supreme Personality of Godhead, his natural inclination to love is fully absorbed in thoughts of the Lord. That is called transcendental attachment, and devotional service according to that attachment is called ragatmika, or spontaneous devotional service.” (Madhya 22.149)