The Tears Of Krishna, Balarama, And Nanda Baba 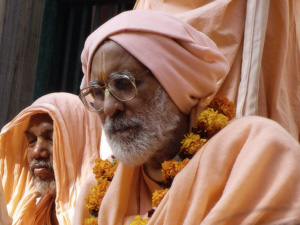 Srila Visvanatha Cakravarti Thakura is asking, "Is it impossible that Krishna and Balarama and the Vrajavasis can take more than one form?" He is also answering his own question. During Rasa-lila Krishna took millions of forms and danced between millions of gopis. If he does so in Vrindavana, then what to speak of Dvaraka? There He took 16,108 forms, and He had 16,108 palaces. In many other pastimes as well, Krishna simultaneously took many different forms.

There are also many evidences in Srimad Bhagavatam that Krishna was actually staying in Vrindavana as well as in Mathura, and that form was realized and seen by Uddhava, Balarama, and also by the gopis. All the Vrajavasis see Krishna in dreams. Sometimes, when He directly comes in front of them, they still think, "This is our imagination." But that evidence is given in Bhagavatam.

After Krishna and Balarama killed Kamsa They approached Their Vasudeva and Devaki and cried, "Please forgive us. It is the duty of the son to serve the parents, but we left you at a young age. We could not serve you, and therefore you could not taste the happiness of vatsalya-rasa. So please forgive us; now We will serve you. Vasudeva and Devaki asked, "If by chanting the holy names, if by remembering You, one becomes free from all types of sin, then what type of sinful activity have we committed that we had to spend eleven years in the jail of Kamsa, that our seven sons were killed, and that Kamsa tortured us by hitting our chests with big rocks? What type of sinful activity did we commit that we had to suffer that type of punishment?" Krishna called His Yogamaya and said, "O mother, O father."

Balarama and Krishna then went to the camp of Nanda Baba. Krishna sat on his right lap and Balarama sat on his left lap. Nanda Baba put his hands on each of Their shoulders, and he was weeping and weeping. Krishna and Balarama were also weeping. Externally, in the Bhagavatam, we see that Balarama is saying, "We are your actual children because you nourished and protected Us. The person who simply gives birth is not the real father." Externally Krishna said, "O Baba, you should go home because you must protect the Vrajavasis and look after the cows." The internal meaning is that Krishna is asking Nanda Baba, "O father, you nourished Us with so much love and affection. We have one question for you. We want you to completely clear our doubts. Just tell the truth as it is.

Now We are staying in Mathura. Vasudeva and Devaki, Ugrasena, and the all the Mathuravasis are saying, "Oh, You are actually the sons of Vasudeva and Devaki. You are not the sons of Yasoda and Nanda Baba. In order to protect You from Kamsa, Devaki and Vasudeva sent You to Gokula where You were protected for ten or eleven years. Now that Your business is finished, You have come back to Your real mother and father. Now Your duty is to serve them and give them happiness." Krishna asked, "Baba, what is the meaning? Are We your actual sons, or are We your adopted sons? Everyone in Mathura is telling Us, "Don't return to Vrindavana. You should stay here. This is Your real home." We wanted to come and see you yesterday, but all the Mathuravasis called us by force and told us, "O stay here." Then Vasudeva and Devaki, with much affection, forced Us to take prasada in their house. We could not come and see you last night, and My mind is very disturbed. Even though you are a friend and brother of Vasudeva, they never invited you for mahaprasada. When you were leaving they never even escorted you on your way back to Vrindavana. Our minds are therefore very disturbed. We have come here secretly, and We want you to tell us the direct truth. Whose sons are We?"

Then Nanda Baba said, "Oh? Krishna, my son; You are my son, but Gargacarya told us that in your last birth You were the son of Vasudeva. This is why Your name is Vasudeva." It is natural that Vasudeva is thinking that You are his son, because You are so qualified, so beautiful, and so attractive. Everyone wants You as their son. So this is not such an unusual thing. Balarama is actually Vasudeva's son because Rohini's husband is Vasudeva. Vasudeva can say that his son is Balarama because it is true. But how can he say that Krishna is his son? It is not possible."

Because Nanda Baba is Krishna's father, he is more intelligent than Him. He therefore turned the question around and put that question back to Krishna. Nanda Baba said, "Krishna, I thought You were so intelligent. I can't believe it. You stayed with me for so many years. We gave You so much love and affection from Your birth. In one day You have forgotten all that. In one day You have forgotten everything. It is not proper to ask such a question from Your father. How can You even think such a thing?" Krishna mind was shaking and He thought, "Oh, I have done the wrong thing. I should not of asked such a question." Nanda Baba said again and again, "I served You since birth. It is impossible that a stepfather can give the love and affection I gave You. It is impossible; completely impossible. The love I gave You can only come from the real father. Still, in one day Vasudeva has changed Your mind."

Krishna then became very angry and said, "Accha. Vasudeva is My number one enemy. I previously thought he was My well-wisher, My friend. But now I see that he is trying to steal Me from My father. Now I understand; he is My number one enemy. I never want to see his face again. In fact, We should leave here immediately and go back to Vrindavana." Nanda Baba then said to Balarama, "Alright, Balarama. I have heard Krishna's side. What is Your decision? Vasudeva is Your father, so what do You want to do?"

Krishna, Balarama, and Nanda Baba were all crying at this time. Balarama said, "Actually, he is My father only by definition. Someone who only gives birth is not the father. Yes, he is My father, but I am not his son. You have nourished and protected Me from birth; so you were the actual father. There are five types of father. Janma-he who gives birth; palan-he who nourishes; guru-he who gives the sacred thread; kanya dana-he who gives the daughter in charity. By accident, by chance, I became his son. I did not have any say in the matter. Such a father is organized by fate, and after death there is no relationship with that father who gives birth. By chance I came to you and you cared for Me. You are My father-My real Father-because you protected me. I can never leave Krishna, it is completely impossible." Balarama made a drda sankalpa, a fixed vow. He said, "I will never stay here in Mathura. Even if Brahmaji himself comes and gives Me the direct order: 'You have to stay in Mathura with Your mother and father,' I will never accept it. I will never follow him. I must go back to Vrindavana."

Nanda Baba, Krishna, and Balarama were all weeping. Nanda Baba then spoke, "It is true that they are very selfish and they want their own happiness. Otherwise, why would they want to steal my sons? It is because they want happiness-not Krishna Balarama. It is true that they are very selfish; but why should I become like them?" Nanda Baba thought, "If I take Them with me, then all the others will become unhappy. Why should I follow him? He is not my gurudeva." He then became silent for sometime. He was thinking, "What should I do?

Of course Nanda Maharaja and all the Vrajavasis may also be called jyatis in one sense, because he has a relationship with Vasudeva. Balarama said, "O Nanda, you are in this Yadu-vamsa. You are in the dynasty of Yadu. Actually Vasudeva is not your suhrt, he is your jyati. Even though he is your brother, I should give more love to you." Krishna said, "You have also come from the Yadu dynasty." You are both Balarama's jyati and suhrt. He has both relationships with you-jyati and suhrt-because We are also from the Yadu dynasty".

Who is suhrt to Balarama and Krishna in Vraja? All the Vrajavasis-Nanda Maharaja, those in ujjvala rasa, those who are priyas of Krishna, and those who are well wishers of Krishna are all suhrt.

When Yasodamaiya wanted to bind Krishna, the rope was always two fingers short. In the same way, Nanda Baba's intelligence is always two fingers more than that of Krishna and Balarama. That is why he was able to ask that cutting question to Krishna and Balarama. After hearing Nanda Baba's question, Krishna began crying. Nanda Baba had said, "Oh, You have been staying so long with us, and still, after coming here for one day you are asking this question." Weeping, Krishna, Balarama and Nanda Baba climbed upon Nanda Baba's chariot. Although his chariot was made of gold, it was not a chariot of Mathura. It was a bullock cart from Vraja, but still it was made with jewels and gold. It was not the same type of bullock cart that people used for carrying loads. Krishna, Balarama, and Nanda Maharaja thus went to Vraja.

Vrindavana itself includes aprakat, unmanifest, and prakat, manifest, lilas. In prakat lila the Vrajabasis are feeling separation, and in aprakat they are not. In aprakat, Nanda Maharaja, Balarama, and Krishna are together with everyone, and in prakat everyone is feeling separation.