All My Daughters Should Preach 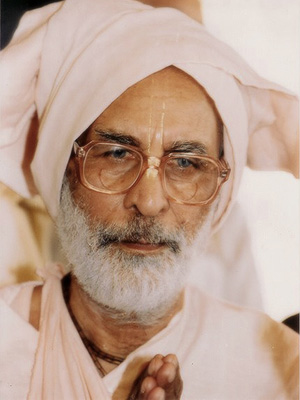 [Just before beginning his own evening class, Srila Maharaja called on his young disciple, Damodara-priya dasi, (who had been studying law in a university) to speak to his audience of 400 devotees and guests. She had not spoken about Krsna in a public forum before this.]

[Srila Narayana Maharaja:] Damodara Priya should stand up and speak about the mission of Srila Bhaktivedanta Swami Maharaja - your Prabhupada. Speak about why he came, how he traveled in his old age, and what was his mission. You should speak very boldly.

[Damodara-priya dasi:] I'm actually very embarrassed to be standing up here, because I'm looking at the audience and I can see so many people whose knowledge and devotion are so much higher than mine.

[Damodara-priya offered prayers to the guru-parampara and then spoke a few sentences. She spoke very simply, but very enthusiastically and boldly.]

[Srila Narayana Maharaja:] She is an advocate. She can preach my mission. She is speaking about the soul. Yes I want this. Very good. Thank you.

[Srila Narayana Maharaja:] I want that all my daughters and children should speak like this - very boldly - jumping like lions and roaring like lions on the head of an elephant. [Then, pointing to other ladies in the audience, he continued:] You, and you, and you. I don't want [now speaking in the tone of a shy kitty cat:] mew, mew, mew. [In other words, "I don't want timid, fearful, preaching."] You should be ready to preach my mission throughout the world. Begin from Australia and then everywhere. That is why I told you to practice. Then, someday, when you become expert, you should preach like lions - like me - everywhere. Thank you.