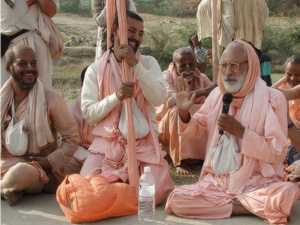 [The month of Kartika ended on November 10th, and on the 13th Parama-pujyapada Srila Narayana Maharaja left for Delhi. On November 16th he led over 500 devotees in a large festival to officially open the new Sri Sri Ramana Bihari Gaudiya Matha in Janakapuri, Delhi. On the next day he left for the Philippines, where he plans to spend a month in resting and writing. Gradually you will be receiving the talks givin by Srila Maharaja during Kartika at the various pastime places. The following is a short talk at Ganthuli-grama:]

This village, Ganthuli, is one mile from Gulala-kunda. In the month of Phalguna, February-March, at the time of Holi, all the gopis were present here, playing Holi with Sri Krsna and the gopas. This is where Holi took place. Sri Krsna and His friends were in one party and Srimati Radhika and Her sakhis were in the opposite party, and there were more gopis than there were gopas. Both the gopas and gopis held syringes which shot out many colors, and these colors were not easily removable. All places and creatures became reddish because of the throwing of the great quantities of red powder - the sky, trees, cows, and all beings, and especially this kunda, named Gulala Kunda after this pastime, became reddish. Everything in Vraja became reddish at that time.

In the meantime Srimati Radhika and Sri Krsna sat down together. Seeing this, Sri Lalitaji took Lord Krsna's pitambara (yellow cloth) and Srimati Radharani's veil and tied them together in the back, so that no one would be able to see the knot. Krsna and Radha were also not aware of this fact. Visakha then began to sing a marriage song and all the gopis sang with her. Srimati Radharani and Sri Krsna became ashamed and wanted to run away from there, but They couldn't do so because Their clothes were tied together. All the gopis then began to clap. The word ganthuli means "knot" or "to tie together," and this place is thus known as Ganthuli.

After playing Holi Krsna and the gopis took bath in Gulala-kunda, and a stream of the kunda became reddish (lala). Even now, at the time of Purnima, the birth of Sri Caitanya Mahaprabhu, a stream within the kunda becomes reddish and it can be seen by all.

Sri Caitanya Mahaprabhu, Srila Rupa Gosvami and Srila Sanatana Gosvami came here. Sriman Mahaprabhu told some his devotees that if they go to Vrndavana they should not spend a long time there and should not see Sri Nathaji on Giriraja Govardhana. Why? They would not be able to understand the behavior of pure Vrajavasis. They would not be able to reconcile their behavior with Lord Krsna, and they would thus make an offense at the lotus feet of both Krsna and those Vrajavasis. On one side Sri Giriraja Govardhana the direct manifestation of Krsna and on the other side the direct manifestation of Srimati Radhika. How can we place our feet on Radha and Krsna? Sri Caitanya Mahaprabhu is Bhagavan Sri Krsna Himself, but He came to this world in the mood of a devotee, to teach us by His own example. He showed us, as an acarya, how to behave and do bhajana. Therefore He did not want to climb on the top of Giriraja Govardhana. He wanted to take darsana of Gopalji, and sometimes Srila Rupa Gosvami also wanted darsana. Gopalji thus inspired Mohammedans to come and make chaos, and in order to protect that deity the devotees took Him from the top of Govardhana to Ghantuli-grama. Sriman Mahaprabhu and Srila Rupa Gosvami thus took darsan here.* [See Endnote]

We are very lucky to come to this place, and now we will go to Kyon Nai, Beheja, Rasoli, Adi Badra, Dig and many places.

[*Endnote - Gopala stayed in a village called Annakuta-grama on Govardhana Hill. The villagers who lived in that village were mainly from Rajasthan. One person who came to the village informed the inhabitants, "The Turkish soldiers are now preparing to attack your village."Flee this village tonight, and do not allow one person to remain. Take the Deity with you and leave, for the Muslim soldiers will come tomorrow." Hearing this, all the villagers became very anxious. They first took Gopala and moved Him to a village known as Ganthuli. The Gopala Deity was kept in the house of a brahmana, and His worship was conducted secretly. Everyone fled, and thus the village of Annakuta was deserted. Due to fear of the Muslims, the Gopala Deity was moved from one place to another again and again. Thus giving up His temple, Lord Gopala would sometimes live in a bush and sometimes in one village after another.