After The Play - Varsana 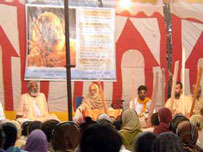 [Over 1000 devotees participated in this year's Vraja Mandala parikrama. A beautiful play called "The Meeting in the Disguise of a Girl Doctor" by Srila Visvanatha Cakravarti Thakura was presented for the pleasure of Srila Maharaja and the devotees while they were in Varsana.

A summary of the play is as follows: Jatila told her daughter Kutila that she is unable to protect her daughter-in-law Srimati Radhika from Sri Krsna. Therefore, she decided to confine Her inside the house so that She would not be bitten by the eager glances of Sri Krsna.

Danistha came to Yavat to request that Srimati Radharani cook, because Krsna did not eat anything prepared by anyone else. Srimati Radhika would generally go to Nandagaon everyday to cook, but because Jatila now made Her stay in the house, she could not go. While Danistha was there, she whispered a secret into Lalita and Radhika's ear and then left. Visakha then came to Jatila crying and said a snake had bitten Srimati Radhika. Jatila sent Kutila to get Abhimanyu and a snake-bite doctor to come and chant special mantras to free Srimati Radhika from the snake poison. She herself then went to Paurnamasi and told her everything that had happened. Paurnamasi said she would help, and she took Jatila to see Gargi, the daughter of Garga Muni. She asked Gargi if she had learned the proper snake mantras from her father. Gargi replied that she had not, but fortunately her younger sister named Vidyavali had, and fortunately Vidyavali was now visiting Vraja from Kasi where she lived with her husband. Jatila begged Gargi to come to her home with Vidyavali to free Srimati Radhika from the deadly snake poison.

Meanwhile, Danistha and the other gopis who had pre-planned the events disguised Sri Krsna as Vidyavali. When "Vidyavali" arrived at the home of Srimati Radhika she told Jatila that in order to cure Jatila's daughter-in-law, she would need to chant mantras over Her body and also chew betel nut while chanting a special mantra on it, and then give it to Srimati Radhika to chew. Jatila agreed. Vidyavali sent everyone out of Srimati Radhika's room and pretended to have a conversation with the snake, and Sri Krsna Himself played the part of the snake. In the conversation that ensued between Vidyavali and the snake, Sri Krsna in the voice of the snake explained to Jatila that the dreadful incident was the result of a curse on her. If she would continue to keep Radharani from Her service at Nandagaon, no doctor would be able to reverse the power of the curse. In this way her son, who would be bitten by the snake on the very next day, and her daughter-in-law would both surely die. Hearing this from outside the door, Jatila quickly agreed to let Srimati Radharani go to Nandagaon everyday with no obstruction. In this way Sri Krsna and Srimati Radharani were able to meet, and the Divine Couple were both cured of the snake bite of separation.

After the performance, and after offering obeisances to Srila Maharaja, the players listened as their Guru Maharaja blessed all those who participated and then gave instructions for the spiritual advancement of the players and all others present:]

I want you all to give up your enjoying moods - lust, sense gratification, and the like. So many cases are being brought to my attention regarding these matters - three or four cases daily - that I become puzzled and think, "What to do?" In this drama Jatila became puzzled about whether or not she should continue to send her daughter-in-law to the house of Mother Yasoda. She thought if she would not send Radhika then her son Abhimanyu might die, and if she would send Her, then all would criticize and ask, "Why is your daughter-in-law going to see Krsna?"

Similarly I am puzzled, thinking, "Should I continue to preach in Western countries about the goal of Krsna's service, or should I stop?" Those I believed in tried to cheat me. They should not try to cheat me. They have endeavored for sense gratification for so many lives, so why should they not give this human life to the lotus feet of Lord Krsna? My lady disciples should be determined and think, "Do or Die!" There are so many examples for ladies to follow, like Srimati Gangamata Thakurani, Gargi, Savitri and many hundreds of thousands more. If males can be brahmacaris and sannyasis, why can't the ladies also control their senses? Why? You should all be like brahmacaris and sannyasis.

Our mission is only to preach that we should give our hearts fully to Sri Sri Radha and Krsna, not to any other person. We have some honor for Gurudeva and we have given everything to his lotus feet, but of course that attachment is not in the realm of lust or sense gratification. A guru is so-called and a cheater if he cannot take away all impurities from the disciple's heart. If he cannot cleanse all impurities, why should he be a guru? Guru should be ideal, our brahmacaris and sannyasis should not deviate, and our girls should also not deviate. They should be ideal. They should not come to me with concerns for satisfying their lust and other sense desires. I cannot help with that. Don't be animals - donkeys and monkeys. Be pure devotees like Hanuman and Srila Raghunatha dasa Gosvami. In this way we can preach the mission of Srila Rupa Gosvami and Sri Caitanya Mahaprabhu throughout the world.

The mission of Sri Caitanya Mahaprabhu is:

"May that Lord, who is known as the son of Srimati Sacidevi, be transcendentally situated in the innermost chambers of your heart. Resplendent with the radiance of molten gold, He has appeared in the age of Kali by His causeless mercy to bestow what has not been given in a very long time - manjari-bhava, the service of Srimati Radhika as her confidential maidservant."

My blessings to all who were in the play. Try to follow my instructions, and thus you will be happy in your life.
Gaura Premanande!