Who Will Save Us? 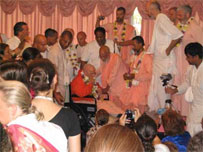 Our festival is going on very nicely, with no complaints. There is very good prasadam distribution, sweet and powerful hari-katha, and so many Vaisnavas and sannyasis are here.

Today we are fortunate that the first sannyasi of Srila Bhaktivedanta Swami Maharaja, Sripad Kirtanananda prabhu, is present here. I was present for his sannyasa ceremony, and I used to take him to Delhi and other places to preach here and there. I was the only one with him. I received Srila Swami Maharaja with him, when Srila Swami Maharaja returned from America for the first time [1967]. I have so many remembrances with him, and perhaps he is also remembering those times. He has served his Gurudeva in so many ways, and especially he made a golden temple in Virginia. I have been there, and I saw that it is very beautiful. He was a very strong preacher at that time. I want that he speaks a few words to the devotees.

[Kirtanananda dasa:] I feel so fortunate to be here in the presence of all these wonderful Vaisnavas, and especially in the presence of Srila Narayana Maharaja, who is very dear to me. He assisted Srila Prabhupada in my sannyasa ceremony. He made my danda. So, I have always felt very close to Maharaja.

I simply beg the blessings of all the assembled Vaisnavas so I can say a few words in the pursuance of the mission of Lord Krsna, of the whole disciplic succession down to Srila Prabhupada, and now of Srila Narayana Maharaja who is carrying this on very nicely.

I have great admiration for him. I read all his books and appreciate them very much. I am now humbly trying to follow in the footsteps of these great acaryas to present the message of Lord Krsna: "Surrender to Me utterly," so that people today can understand. I have inspiration to put this in an easily understood formula of thanking Krsna for ‘now as it is’…"

[In this Miami harikatha festival, Srila Narayana Maharaja summarized the main principles of Srimad-bhagavatam, Canto 1-10. In previous days he had been discussing up to Canto three, and calling on devotees to discuss some of the great devotees whose lives and characters are narrated therein. On this day, after his introduction, he entered the 5th Canto, and spoke on the significance of the history of Bharata Maharaja:]

[Srila Narayana Maharaja:] There are so many teachings in Maharaja Bharata's life. After half of his life, which was 50,000 years, he realized that this world is illusory and that there is no real happiness here. One should not waste time. One should at once search for a bona fide Guru and begin hari-bhajana.

Bharata Maharaja left his house. He was a very great king of Bharata-varsa. He had no attachments. He left the attachment of his wife, children, kingdom and properties, and went to the forest. He was doing good bhajana there, but then he became very attached to a deer. He was so attached that when the deer met a group of other deer and ran away into the forest with them, he became maddened. He was absorbed in remembering that deer, thinking, "Where is my deer? What will happen to him? Perhaps a tiger or lion will eat him." While he was thinking in this way, one night death came, and in his next life he became a deer.

What is the purport? Bharata Maharaja remembered a deer at the time of death and he became a deer. Similarly, if at that time we remember Krsna and our svajatiya asraya snigda, *[See endnote 1] a Vrajavasi like the gopis or Sri Rupa Manjari, then we must become a gopi. We must. If Bharata Maharaja became a deer by remembering a deer at the time of death, why would this principle not apply to others? Our Gosvamis, especially Srila Rupa Gosvami, have given the opportunity for meditation on Sri Sri Radha-Krsna asta-kaliya-lila. If you will remember this for your entire life, at the time of death we will become a gopi under the guidance of Sri Rupa Manjari.

What are we doing now? Our life is mostly wasted in earning money. What will money do? Will it give peace and happiness in life? Not at all. Not at all. Bharata was attached to a deer and became a deer. Similarly, if someone is attached to a girlfriend, what will happen? He must become a lady in his next life and he will be attached to men. We should learn from this. Although Bharata left all attachments and worldly desires, still, later on he became attached to a young deer. He had attained bhava (the sprout of love of God) so only three lives were lost. But what about us? We have all kinds of anarthas, and even nistha (steadiness in bhakti) and ruci (taste in bhakti) have not come. Who will save us?

It is stated in Srimad-Bhagavatam:

Mahat-pada-rajo-‘bhisekam. The Mahat (great, self-realized devotee) is Sri Gurudeva,
Srila Rupa Gosvami and others like them. They are our saviors. If we think, "I cannot save myself, so my Gurudeva and Vaisnavas will save me," then we can be protected. Otherwise, our life will be ruined. Those who want krsna-prema must always remember this – no one else can save us.

The attachment of men for ladies and ladies' attachment to men are the same. Be careful. If you are in married life, this is okay. Stay with your husband and family, and continue doing bhajana. If you are a brahmacari or sannyasi, be very careful; otherwise maya will come in a moment and eat you. We should always remember this.

There is still time. What ever mistakes we have made, we should try to correct. We don’t know when death will come. Death may come in a moment.

In this way, there are so many teachings in the life of Bharata Maharaja, and we should try to follow them.

Now, we will discuss the life and character of Sri Prahlada Maharaja. Srila Bhaktisiddhanta Sarasvati Thakura read Prahlada-carita 108 times. Prahlada Maharaja was a pure bhakta, and we should all follow him.

He was very tolerant.

[“One who thinks himself lower than the grass, who is more tolerant than a tree, and who does not expect personal honor yet is always prepared to give all respect to others can very easily always chant the holy name of the Lord.” (Sri Siksastakam, verse 3)]

If you want to be a Vaisnava, you will have to follow the life example of Prahlada Maharaja. Try to listen and follow. Try not to be attached to anyone. Be attached to Sri Sri Radha-Krsna and Sri Caitanya Mahaprabhu.

[For the remainder of the class Srila Narayana Maharaja requested Sripad Damodara Maharaja, Sripad Padmanabha Maharaja and then Sripad Madhava Maharaja to tell about Prahlada Maharaja's life and teachings.]

[*Endnote 1 – To associate with saintly devotees who are more advanced than oneself, who are of the same disposition (sajatiya), who taste the meaning of rasa (rasika) and who are affectionate (snigdha), is what is signified by this [61st] limb of bhakti…A sadhaka should take association of those devotees who are of the same spiritual disposition. In other words one should associate with those devotees who worship the same particular form of the Lord and who possess the same internal spiritual mood as oneself. (taken from Srila Narayana Maharaja's commentary of Bhakti-rasamrta-sindhu-bindu p.99]