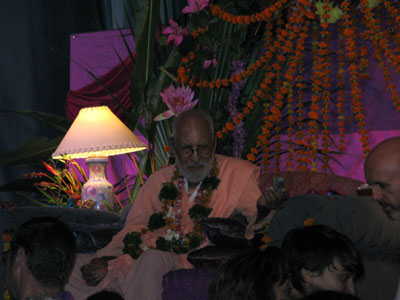 We are discussing the conversation between Sri Krsna and His devotee Uddhava. At the time of His departure from this world, Krsna gave instructions to Uddhava. Uddhava had asked: What are the symptoms of pure devotees? How can we become pure devotees? How can we achieve uttama-bhakti (pure devotional service)? In this connection, Krsna replied, "The symptoms of My devotees are as follows:

["O Uddhava, a saintly person is merciful and never injures others. Even if others are aggressive, he is tolerant and forgiving toward all living entities. His strength and meaning in life come from the truth itself, he is free from all envy and jealousy, and his mind is equal in material happiness and distress." (Srimad-Bhagavatam 11.11.29)]

"O My dear Uddhava, My devotee is very merciful. He cannot tolerate the sufferings of the conditioned souls. That is why, like Narada, he travels throughout the world, without invitation."

No one invited Srila Bhaktivedanta Swami Maharaja, asking him, "Please come and preach here." He came automatically, by his mercy. He was sent by his Gurudeva, Srila Prabhupada Bhaktisiddhanta Sarasvati Thakura, who was the embodiment of mercy. Such devotees are very, very compassionate. They go from door to door, like Nityananda Prabhu. Even if they are insulted or beaten, they continue preaching, saying, "Somehow, chant Hare Krsna!"

Jagai and Madhai hit Nityananda Prabhu on His head with an earthen pot, and He was bleeding. Sri Caitanya Mahaprabhu became very, very angry and wanted to kill them with His cakra (disk weapon). Nityananda Prabhu stopped Him, saying, "No, Lord! Please do not do this. In other incarnations You killed the demons, but in this incarnation You should not do so." His devotees are like this. Even if someone insults them, they don't give up their habit to preach.

They don't consider anyone in this world to be their enemy. Though Duryodhana and his party were doing so much nonsense to Maharaja Yudhisthira, Yudhisthira never thought, "Duryodhana is my enemy." Yudhisthira Maharaja never addressed him as "Duryodhana" (meaning evil warrior). He always addressed him as "Suryordhana (meaning pure, well-behaved warrior)." If anyone wants to do bhajana, he should be like this; He should not think of anyone as an enemy, even if someone is doing something against him.

There were once two saints, and they went to the bank of a river. They saw that a scorpion was in the current of that river. One of the saintly persons picked up that scorpion on his palm to save him, but the scorpion bit him and again fell into the stream. Again the saint lifted out the scorpion and again he stung; but again the saint picked him up. His friend said, "Why are you doing this? Let's go. Don't try to save him. Let him die." That saint replied, "If this scorpion is not giving up his nature to bite, why should I give up my nature to save him?" And again he went to save him. You should be like this; if someone does something against you, don't take revenge.

Titiksuh means tolerance. If any great suffering comes, devotees tolerate it. Tolerance is a very high-class quality of devotees. We should try to tolerate.

Do you know what is Truth - the Absolute Truth? Krsna is Truth, the Absolute Truth, and His devotees are like Him. From their heart, they don't want mischief to come to others. They always use their life, their wealth, their power, their strength, their everything, for others - to save others, to help others. Vaisnavas should help others.

In any situation, a devotee's intelligence never becomes contaminated. He always manifests the following qualifications:

["Thinking oneself to be even lower and more worthless than insignificant grass
which has been trampled beneath everyone's feet, being more tolerant than a tree,
being prideless, and offering respect to all others according to their respective positions,
one should continuously chant the holy name of Sri Hari." (Sri Siksastaka 3)]

Devotees don't collect many things - neither wealth nor anything else. They keep only what is necessary to somehow maintain their life and their family's life; not more than that. They eat what is needed to preserve their life, and not more than that. Otherwise, one becomes fat. If fatness comes, so many varieties of disease will come - especially heart disease. And, if any danger comes, they cannot run away. So they should be careful. Those who take limited foodstuffs have very good intestines and they are free from disease.

Devotees wake up in the morning before their Guru, and go to sleep after their Gurudeva goes to sleep. They are always serving Gurudeva; and when Gurudeva sleeps, then they rest. They do not take prasadam until after Gurudeva takes prasadam. First they serve him prasadam, and then they themselves take. They are never controlled by hunger, thirst, misery, illusion, birth, death, disease, and old age. Any kind of suffering may come, but they tolerate it. They always chant Krsna's holy names: Hare Krsna Hare Krsna Krsna Krsna Hare Hare, Hare Rama Hare Rama Rama Rama Hare Hare.

They don't want any praise from others, but according to other's qualifications they always give praise. Krsna told Uddhava "These pure devotees know Me in truth, and they attain prema-bhakti.

Krsna continues to instruct Uddhava: "O My dear Uddhava, service to My devotee is greater than serving Me." Krsna is personally telling this: "If one serves Me, I will be not as happy as when one serves Mother Yasoda. I will be more happy if one can serve the gopis or any devotee."

Devotees are always happy by hearing harikatha. If a person has bhava-bhakti, the stage of devotion just prior to prema, pure love of God, he has the following symptoms:

["When the seed of ecstatic emotion for Krsna fructifies, the following nine symptoms manifest in one's behavior: forgiveness, concern that time should not be wasted, detachment, absence of false prestige, hope, eagerness, a taste for chanting the holy name of the Lord, attachment to descriptions of the transcendental qualities of the Lord, and affection for those places where the Lord resides-that is, a temple or a holy place like Vrndavana. These are all called anubhava, subordinate signs of ecstatic emotion. They are visible in a person in whose heart the seed of love of God has begun to fructify." (Bhakti-rasamrta-sindhu 1.3.25-26)]

"They should always glorify My transcendental birth and activities." The birth of Krsna is not like that of humans; He is not mortal. Krsna has taken birth from Mother Yasoda, but He is also the Creator of Mother Yasoda. We should know the nature of Krsna's birth; it is transcendental. Krsna is always the son of Mother Yasoda, even though He is unborn. Therefore, You must observe Janmastami (Krsna's Birthday celebration), Rama-nauvami (the Birthday of Krsna's incarnation, Lord Rama), Caitanya Mahaprabhu's birthday, Nityananda Trayodasi, Nrsmhadeva's birthday, and the birthdays of Advaita Acarya, Baladeva Prabhu, and Srila Vyasadeva. On these days, you should sing the glories of Sri Krsna. You can sing the songs like: "Yasomati nandana, vrajavara nagara gokula ranjana kana." Or you can sing, "bolo hari hari, mukunda murari, rama krsna hayagriva"

And, dancing in ecstasy with drums, you can make a festival (mahotsava). On Krsna's birthday, do nagara-sankirtana (chanting in public) and invite many people to join you with drums, elephants, and horses, just as we do in Mathura, worshiping Krsna with perfuse paraphernalia.

Devotees should personally serve the Deity - as a servant. With their own hands, they should wash the temple. They should do arcana (the worship) themselves - not through a servant. They should follow the way in which Sri Caitanya Mahaprabhu personally cleaned Gundica Mandira.