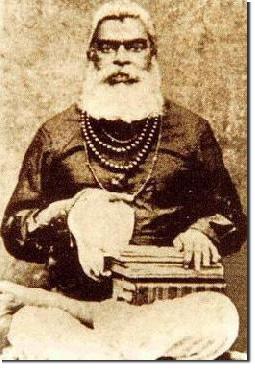 [This article is a biographical sketch of Srila Bhaktivinoda Thakura written by Srila Bhakti Prajnana Kesava Gosvami Maharaja in his introduction to Jaiva-dharma:]

Srila Bhaktivinoda Thakura has broadcast the transcendental instructions of Sri Caitanya Mahaprabhu in many different languages. He has written approximately one hundred books in Sanskrit, Bengali, Oriya, Hindi, Urdu and English. When one sees the list of his books, one can easily infer that the author was a vastly learned scholar of many different languages.

I think it necessary at this point to shed some light on a special feature of the author’s life. Although he was a pre-eminent scholar of Western thought, he was completely free from Western influences. Western educators say, “Don’t follow me; follow my words.” In other words, “Don’t do as I do; do as I say.” The life of Srila Bhaktivinoda Thakura refutes this principle, for he personally applied and demonstrated all the instructions of his books in his own life. Therefore, his instructions and manner of bhajana are known as ‘Bhaktivinoda dhara (the line of Bhaktivinoda).’ There is not a single instruction in his books that he did not personally follow. There is no disparity between his writings and his life, between his actions and his words. They are one in all respects. It is natural for readers to be curious to learn about a great personality who possesses such extraordinary character.

Modern readers in particular, who seek to know about any subject, cannot have faith in an author’s writings without being acquainted with the author himself. Therefore, I am submitting a few words about Srila Bhaktivinoda Thakura. When it comes to discussing the life of great self-realized personalities who are transcendental to mortal existence, it would be a mistake to consider their birth, life span, and departure from the vision of this world to be similar to that of mere mortals. They are beyond birth and death, they are situated in eternal existence, and their coming and going from this world is strictly a matter of their own appearance and disappearance.

Srila Bhaktivinoda Thakura appeared on September 2, 1838, and thus illuminated the sky of Gaudiya Vaisnavism. He took birth in a high-class family in a village named Vira-nagara, which is located within the Nadiya district of West Bengal, not far from Sridhama-Mayapura, the appearance place of Sri Gauranga. He disappeared from this world on June 23, 1914, in the city of Calcutta, at which time he entered the midday pastimes of Sri Sri Gandharvika-Giridhari (Radha-Krsna), who are the supreme objects of worship for the Gaudiya Vaisnavas. In his brief lifespan of seventy-six years, he instructed the world by personally carrying out the duties of the four stages of spiritual life: brahmacarya (celibate student-life), grhastha (religious householder-life), vanaprastha (withdrawal from worldly duties), and sannyasa (formal renunciation). He first underwent brahmacarya and obtained various elevated instructions. After that, he entered gåhastha life and set an ideal example of how to maintain family members through honest and noble means. All householders should follow this example.

During his householder life, he travelled all over India as a highly placed officer in the administration and justice department of the British government of India. By his exacting discrimination and expert administrative skills, this great personality managed to regulate and bring to order even those places that were infamous as lawless states. In the midst of family duties, he astonished all his contemporaries by the religious ideal he displayed. Although engaged in pressing responsibilities, he wrote many books in different languages.

If the reader studies the list of his books, he can clearly deduce Bhaktivinoda's incredible creative power. After retiring from his government responsibilities, Srila Bhaktivinoda Thakura adopted the stage of vanaprastha and intensified his spiritual practice. At that time, he established an asrama at Surabhi-kunja in Godrumadvipa, one of the nine districts of Navadvipa. He remained there and performed bhajana for a considerable time. Later he accepted the life of an ascetic, and stayed at Svananda-sukhada-kunja, which was nearby. While residing there, he established the appearance place of Sri Caitanya Mahaprabhu and many other places of gaura-lila. In this, he followed the example of Mahaprabhu and His followers, the Six Gosvamis, who had discovered the birthplace and other pastime places of Sri Krsna.

If Srila Thakura Bhaktivinoda had not appeared in this world, the pastime places and instructions of Sri Gauranga Mahaprabhu would have disappeared from the world. The entire world of Gaudiya Vaisnavas will therefore remain indebted to him forever. It is for this reason that he has been awarded the highest honor in the Vaisnava community by being addressed as the Seventh Gosvami.