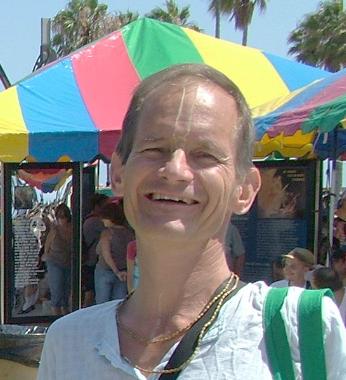 Some of you must have heard the sad news that our dear godbrother and friend Patatriraja prabhu  passed away last month. He was diagnosed with cancer of the vertebrate and required an operation that left him paralyzed. He passed away on November 17th 2008.

A few words of glorification

Many devotees in the Los Angeles and Badger area remember Patatriraja's enthusiasm for hearing harikatha and serving the devotees.

Patatriraja met His Divine Grace A. C. Bhaktivedanta Swami Prabhupada when he was around eighteen years old in 1972 and in 1974  received initiation into maha-mantra and gayatri mantras.  He was part of the Radha Damodar bus party, which distributed cases of Srimad Bhagavatams and Chaitanya Charitamritas to the colleges and universities around the U.S. They held successful chanting festivals on campuses and became very dear to their spiritual master. Not only did Patatriraja take part in distributing books in 10 different languages in 19 different countries, but he also served in making an altar for the Radha Damodar Party bus.

Patatriraja prabhu had the fortune to go to India and  work with the Life Member and the Library Party there. In 2001 he went to India with his mother, now 84 years of age. She  received initiation from Srila Bhaktivedanta Narayana Gosvami Maharaja and became known as Malini dasi.  Both of them lived in Badger, California since  before this mountain village became re-inspired and blessed by the yearly visits of Srila Bhaktivedanta Narayana Gosvami Maharaja.

Through his marriage to Sujana devi dasi, his daughter Chaitanya Shakti dasi was born. To her Patatriraja prabhu was a dedicated and loving father, encouraging his daughter in her material goals and in Krsna Consciousness. She credits him with bringing her fully into Gurudeva-sanga, by introducing her to Srila Gurudeva personally and advocating a mood of service, gratitude, and sharing of stories and realizations.

Patatriraja prabhu had a strong outreach program through his work as a practitioner of holistic medicine. He trained with professional natural healers in the 1980s and 90s, and later developed a vision of how natural healing could assist in Krsna Consciousness, and by emotional and physical healing on many levels, provide an open-minded perspective that would welcome Krsna Consciousness. He was constantly holding health related workshops and seminars where he would introduce the common people to the Gaudiya Vaisnava lifestyle, first through diet and gradually the teachings. He brought so many to meet the pure devotees of Krsna.

In September Patatriraja had a surprise diagnosis of cancer and quickly departed within two months. Before his illness, Mahalaksmi didi was helping provide care for his mother. On the onset of his illness Mahalaksmi didi extended her motherly dedication to care for both of them in their time of need. Our gratitude goes out to her. Mahalaksmi has described her experience in an email. Portions are included here:

"It was quite a life changing experience, for me, taking care of him. I couldn't leave him to wither away and die in a hospital.....the death of the body was inevitable, though I didn't realize it until the day the cancer went into his lungs, Nov. 17th, and we had the ambulance take him to the hospital, in Marina Del Rey, at 10 in the morning. He moved onto a higher realm of service at 9:58 that night

For the memorial service there were over 80 devotees here at his little one bedroom apartment . He was so dear to so many people, because he had the mood of caring for others, including his mother. Patatriraja always had the choice to send his mother to live in Alabama with her one other son who is not vegetarian, and very loving and kind, but not following Vaisnava dharma. Patatriraja knew his mother's heart, and even though his business practice was hindered by the constant responsibilities of caring for an elderly mataji, he did not allow that to stop him from pursuing a joyful, happy, service mood from day to day.

Patatri was a faithful, devoted son, an example, to me, of what the kings in ancient times were.....devoted to caring for others. The eighty or so people, were probably not even half initiated devotees....they were people that he knew through his practice of holistic medicine, (live cell analysis and iridology) as well as persons in the raw food community, and many new-agers that he had met at various workshops.

In his final days, we didn't know that he was not actually getting better, because the spasms in his legs and back had stopped almost 90%. When people would call for him, he'd say, "Every day I'm a little stronger, feeling a little bit better, day by day." That is why so many people were shocked when he actually passed away. He was very much conscious up to the last breath.....he was at the hospital when he passed away, with four of us singing Hare Krishna mantra to him. First I sang Jaya Radha Madhava, and then the other three persons all joined with me in singing the mantra. It was actually perfect....considering how he had lived his life....he gave continually of himself to persons who didn't necessarily aspire for initiation, but just liked hearing about Krsna.

The most special thing about Patatriraja, was that he didn't criticize others, he took to heart the instructions to not find fault....he was always loving to people.....whoever they were.....and taking care of his mother was his service in life....an example of a truly surrendered and loving soul."

To the soul that must eventually leave the temporary and exhausted body, there is nothing more generous as accommodating that transition. My thoughts rest easy and my mood is one of confidence that the environment is always favorable and that the surrendered soul will receive the mercy.

Having observed a similar dedication when a vaisnavi released her claim on the deteriorated body, I recognize how the exalted mood of the maha bhagavat will manifest in the form of faithful servants willingly choosing the bedside station till the end.

My special heartly blessings are for Patatriraja and I pray to Sri Giriraja and Sri Sri Radha Krsna that in his new birth he will obtain the constant association of pure devotees and thus perfect his bhajana.

When our near and dear ones leave their body, naturally we are sad. But we are happy at the same time, knowing that they are Krsna's eternal child, and they have practiced chanting the names of Krsna, serving Him under guidance of Sri Guru, the bona fide representative of Krsna. For the soul there is no birth and no death, only changing body just as we are changing garments. Due to ignorance we are identifying with this body and that causes all pain and suffering in this world. Very fortunate is he or she who uses their human birth to worship and serve Sri Krsna. Patatriraja has received greatest fortune and will be back with his worshipable Lord very soon.

The devotees of Badger and
Los Angeles Sanga