The Auspicious Passing of Krsna-lila didi 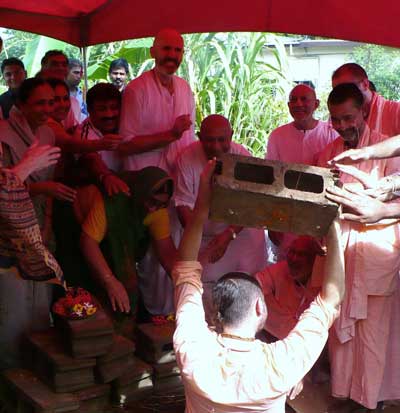 The sisters Krsna-lila didi and Lilamrta didi planned a most auspicious day. They had planned to give a feast at Sri Rupa Sanatana Gaudiya Matha and were going to begin cooking at 6:30am after going on darsans.

Both Krsna-lila didi and Lilamrta didi began the day with mangala-arati at Gopinath Bhavan. From Gopinath Bhavan they went to Seva Kunj and did parikrama and attended the arati there at 5:15am. Then they went to Radha-Damodara temple, saw it was closed and so went to Imlitala Temple. They had darsan there and did parikrama. Krsna-lila didi touched her head to the Imlitala tree and offered pranamas.

At that time Krsna-lila didi complained to her Godsister of some little congestion and pain in her chest. They agreed she should go home and take rest before they go to Rupa Sanatana temple to cook.

After paying her obesiances to Yamuna-devi, Lilamrta didi followed her sister-in-law. She was just two minutes behind.

Lilamrta didi saw her sister-in-law lying halfway down one of the flights of stairs at Gopinath Bhavan. Her mala bag had been neatly placed on the handrail at the top of the stairs. Lilamrta didi called the chokidar, Krsna-lila didis husband, Jaganath prabhu and her own husband Ragunatha prabhu. Lilamrta didi thought Krsna-lila fainted.

I came down the stairs to find Krsna-lila surrounded by her husband Jaganath prabhu, Raghunath prabhu, Lilamrta didi, the chokidar, Isvara prabhu and Caitanya prabhu and others attending to her.

Lilamrta requested me to pick some tulsi leaves. When I came back Krsna-lila didi was being placed on the bed in her room. I placed tulsi in her mouth, on her lips. I was asked to listen to her heart. There was not heartbeat and I heard a gurgling sound and the last breath leave from her mouth crossing tulsi who was on her lips.

Jagannath prabhu placed holy Ganges water in her mouth and on her head.

About 50 devotees came to chant kirtan.

Harsharani didi and her son Narottama prabhu returned from darsan at Rupa Gosvami's samadhi where they had been given Rupa Gosvami's garlands. She didn't know why she was carrying the garlands until she reached Gopinath Bhavan and heard about Krsna-lila didi.

"Sri Vrndavana, the place of the pastimes of Radha and Krsna is indescribable. It is self-manifest and full of ecstatic love. Happiness is eternally present there. It is devoid of the mysteries of old age and death. The pastimes of Krsna are constantly performed there."

Purport: Srila Narottama dasa Thakura describes Vrndavana saying vacanera agocara. When it is not possible to fully describe a place, then the phrase vacanera agocara is used....

"This Vrndavana is My own most beloved abode. Everyone who lives here is My abode – the animals, birds, trees, insects, humands and demigods – when they die they go to my eternal kingdom."

Krsna-lila didi and Jagganath prabhu live in Fiji. 1974 saw their first visit to India and Vrndavana.

During this visit we took deities of Sri Sri Radha-Krsna.

Someone there said, "They have demigods." We were both afraid of what Srila Prabhupada would say. Krsna-lila didi said, "Is this wrong?" Prabhupada met their eyes directly and said, "Do you eat with your servants?" We answered, "No." He said, "You build one platform above the demigods. The demigods are the servants of Radha-Krsna." Then Prabhupada said, "sab theek ho jayega (everything will be alright)."

It was Citralkeha didi that spoke to Krsna-lila about Srila Prabhupada. She told her that if ever you have the chance to meet with him, do not hesitate, he is a highly qualified sadhu.

I think Krsna-lila's desire to have Srila Prabhupada come to Fiji was so strong that it resulted in him not only coming to Fiji but also staying in our house.

In 1975 and 1976 Srila Swami Maharaja, our Prabhupada, stayed with us for 5 to 7 days. Krsna-lila didi cooked for him. She cooked very nice kir (sweet rice) and put saffron in it. Srila Prabhupada recognized the saffron and asked her about it. He was very pleased. In 1976 on Srila Prabhupada's second visit he said he liked our house so much that he wanted to stay a full month and work on Srimad-Bhagavatm. He like to sunbathe on the veranda and the climate was very mild for him.

During the 1976 visit Vasudeva and his wife took initiation. Krsna-lila really wanted to take initiation at that time, but I said, 'let us wait and take it together the following year.' But Srila Prabhupada didn't come again.

We have some very nice memories of Srila Prabhupada's visit. For example, after massaging himself with oil, Prabhupada would have a hot water bath. He started calling for his servant. I heard him call so I went to him. He asked, "Where is my servant?" When his servant came, he asked, "Where were you?" His servant said, "I was sleeping." Prabhupada replied, "You should eat less."

One other time, Vasudeva, myself and my other brothers were discussing the constitution with Srila Prabhupada. We spoke until very late. Prabhupada went to bed late – it was midnight. At 2am I heard Prabhuapda and I thought he was calling out, so I went in. I saw Prabhupada speaking into his dictaphone and then left him.

When Srila Prabhupada didn't return to Fiji, Krsna-lila and myself took zonal initiation from Iskcon.

We had the full set of Srila Prabhupada's lectures and everyday for 20 years, morning and night, we listened to these lectures and discussed Srimad-Bhagavatam.

In response to our prayers, in December, 1997, Srila Gurudeva came to Fiji. Straight away he gave us diksa. Gurudeva said he would give us siksa but that he regarded anyone who had even seen Srila Prabhupada just once, he considered them Srila Prabhupada's disciples.

In 1998, Srila Gurudeva stayed in Sydney at Raghunath das' house. I had darsan with Gurudeva and I said to him, "I have full faith in you and I don't want a foot in two camps."

Srila Gurudeva gave harinama initiation to both of us. So first we got diksa and later harinama.

This period of our life, since meeting Gurudeva has been the happiest time for us. I expressed my remorse to Srila Gurdueva that I had not met him before, but Gurudeva assured us that we met at the right time.

Some years back, a woman with breast cancer asked me to accompany her to Vrndavana. I told her I couldn't stay long because of my duties as temple President. Two days before I had to leave India this woman devotee left her body.

Glorification of Krsna-lila did from Lilamrta didi

We were always together in parikrama, hari-katha, and anything to do with Srila Gurudeva and bhakti.

Krsna-lila had a very kind heart. Last year I couldn't come to Kartika, but my daughter came. Krsna-lila looked after her so carefully. She put her first. If she lit a ghee lamp she gave it to my daughter first.

Krsna-lila was a quiet and shy person with a soft nature towards everybody. She had full faith in Srila Gurudeva.

She would contact me before coming to India and we discussed what we would take and what things we would buy fresh in Vrndavana.

Krsnapriya didi would speak hari-katha to us and talk about her experiences with Srila Gurudeva. Just yesterday Krsna-priya didi was speaking to Krsna-lila and told her, "You stay here in Vrndavana and slowly leave your body here." This was just the night before she left her body.

Just the other night, talking on the phone to my children, Krsna-lila told them to sit every evening, chant together and discuss hari-katha.

Our family was very close to Krsna-lila. When my daughter was sick, she took special care of her.

We were so close, closer then friends and closer than sisters, a very special relationship.

She has left in such an auspicious way. We were always together. Just today, she was alone for 2 minutes and in that time she left.