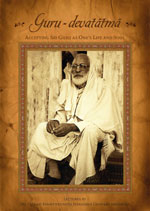 Guru-devatātmā. First, we must think that guru is our ātmā, our life and soul. Being totally surrendered to him, we must depend solely on him. Tan ābhajet. Tan means the Supreme Lord, Kṛṣṇa. If we serve Kṛṣṇa under the guidance of sad-guru, then certainly, like magic, we will be out of māyā. We will see that our transcendental form has manifested, that we are serving Kṛṣṇa, and that we are now bathing in the endless ocean of ānanda and rasa. At that time, we will also be embodiments of ānanda, and we will simultaneously be the enjoyers of ānanda by serving.

Try to realize all these facts. It is not sufficient to simply hear about this and tell others. We will have to be established in this truth.

The above excerpt is from a book published in 2003, Guru-devatātmā. This gem and other gems are available for download in the Purebhakti.com download section. You may find it at this link.

The book is very small. Without the preface it is around 42 pages. The preface is posted below.

Every year, by the order of his śikṣā-guru, Śrīla Bhaktivedānta Swāmī Prabhupāda, Śrīla Bhaktivedānta Nārāyaṇa Mahārāja traveled two times around the world, preaching the message of Kṛṣṇa consciousness and pure love. In early December of 2002, he began his preaching tour in Murwillumbah, Australia. On the last day of his stay in Murwillumbah, he requested that the lectures he had given there on the subject of guru-tattva, along with the short talks given by his disciples during those lectures, be published as a booklet. Then, a month later, in mid-January of 2003 in Hilo, Hawaii, he gave two more lectures on the same topic and requested that they be added.

While in Hilo, Śrīla Mahārāja held a special meeting called an iṣṭagoṣṭhī (a discussion of spiritual subject matters based on questions and answers). In that meeting he addressed the doubt regarding the necessity of receiving dīkṣā-mantras from the bona fide guru, and the transcription of that meeting is presented as the last chapter of this booklet.

We offer unlimited obeisances and gratitude to our most worshipable gurudeva, Śrīla Bhaktivedānta Swāmī Prabhupāda, for first manifesting Kṛṣṇa consciousness in the Western world. He has also manifested the Sanskrit verses, English translations, our previous ācāryas' commentaries, and his own Bhaktivedānta purports, to Vedic literatures like Śrīmad-Bhāgavatam and Śrī Caitanya-caritāmṛta. By his mercy, therefore, we were able to reference all the scriptural quotes given in Śrīla Mahārāja's lectures.

Moreover, besides Śrīla Prabhupāda's giving the Vedic scriptures and their deep meanings to the English-speaking world and also arranging for their translation in over fifty foreign languages, he is their personification. Śrī guru is the embodiment of all the

scriptures, and he is such a bona fide guru. Before leaving the vision of this world in 1977, he requested his intimate friend and śikṣā disciple, Śrīla Nārāyaṇa Mahārāja, to continue his mission.

Aspiring for the service of Śrī Hari, Guru and Vaiṣṇava, Syāmarāṇī dāsi