The Grand Opening of Sri Govindaji Gaudiya Matha: A Report 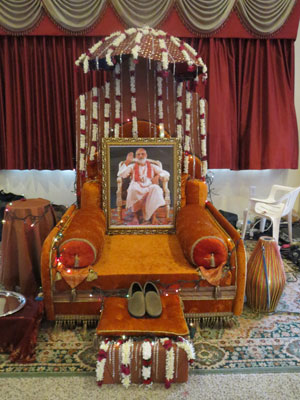 Early on the morning of Saturday, July 13, 2013, under a clear blue sky, when most of the city was still fast asleep, a special corner of the northwestern part of Houston, Texas was pulsating with activity. Four years ago, this land had been consecrated in an elaborate bhumi-puja conducted under the guidance of Srila Bhaktivedanta Narayana Gosvami Maharaja, Gurudeva, and the following year, had received its first foundation stone from Gurudeva's own lotus hands. It was to be the site of Srila Gurudeva's broad vision for his first temple constructed from the ground up in North America and the headquarters of his preaching mission there. And on this morning, that vision was to become a reality....

Devotees came to the four-day festival from near and far—some from as far as Australia, Canada, Europe, Fiji, and New Zealand. There was great turnout from the Houston community as well. Overall, it was estimated that more than two thousand people attended the festivities throughout the four days. In addition, the entire event was broadcast in real-time over the Internet to a world-wide audience of many thousands. (This broadcast will also be available in DVD format in the near future. Please visit the temple website at www.sggm.org for forthcoming details.) 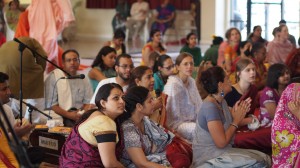 On Friday morning, the program resumed with more kirtans and hari-katha. Sripad Ramacandra Prabhu, the President of Srila Gurudeva's temple in New Delhi (Sri Raman-Vihari Gaudiya Matha), gave a particularly touching lecture on Srila Gurudeva, helping to soothe the immense grief felt by the Houston devotees at not having Srila Gurudeva's physical presence at the temple opening:

Ramacandra Prabhu used the story as an analogy for the situation faced by the devotees of Houston after Srila Gurudeva's disappearance. That is, Srila Gurudeva himself performed the ground-breaking ceremony for the temple but then disappeared from vision. It seemed as though he had suddenly closed the door, but this was only to increase the devotees' desire to serve him. Now, with the opening of the temple, Srila Gurudeva has again opened his door to bestow his merciful darshan.

Friday afternoon was reserved for the kalasa-yatra. Over one hundred and fifty kalasas (copper pots) were filled with waters collected from sacred rivers throughout India and then 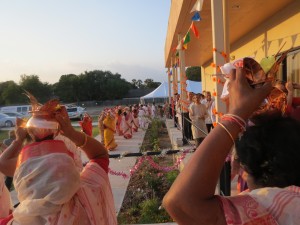 carried around the temple by a procession of women devotees dressed in matching yellow, white, and red saris. As they circumambulated the temple, other devotees accompanied them and ecstatically performed kirtan. The waters from the kalasas were to be used for the grand abhiseka of the Deities the next day.

The installation of the Deities was the main event of the temple inauguration, and on Saturday morning, the heightened anticipation felt by everyone at the festival was palpable. Devotees from the congregation had slept little the night before—many not at all—in order to get ready for all the festivities of the day. Preparations had actually begun months ago, but there was still much to be done: the temple hall and outer premises had to be swept and cleaned; last-minute decorations had to be hung; flower garlands had to be made; materials required for various ceremonial rites had to be gathered; savories, sweets, and other delicious foodstuffs for the grand offering had to be cooked; and so much more. Everyone pitched in to the collective task with great enthusiasm, including the several dozen devotees who traveled to Houston from out of town. 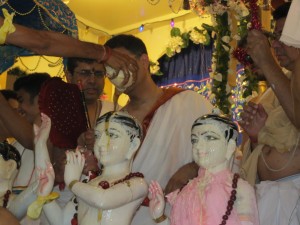 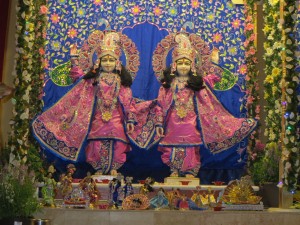 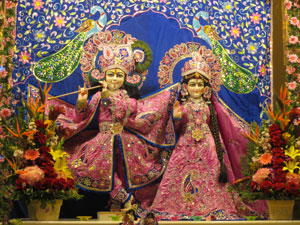 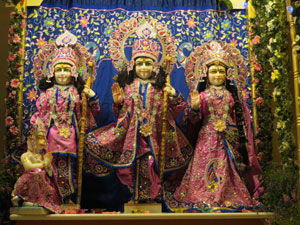 Deities had arrived in Houston from India several days ago but were being served in isolation in a locked room that would later serve as the storage room for Their dresses, ornaments, and worship paraphernalia. When the first of the Deities, Sri Nityananda Prabhu, was brought into the temple hall and situated on the front of the altar for abhiseka, a collective gasp was heard around the temple hall. Similar reactions occurred as each of the Deities—Sri Gauranga Mahaprabhu, Sri Govindaji, Srimati Radharani, Sri Hanuman, Sri Laksmana, Sri Ramacandra, and Srimati Sita Devi—were brought into the temple hall in turn. Each of the Deities was very heavy and required at least four strong male sevakas to be carried into the temple and lifted onto the altar. 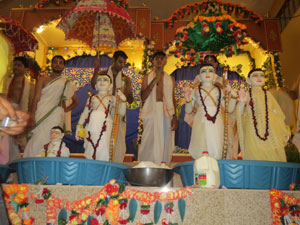 The Deities were each approximately 4 feet tall (only Sri Hanuman-ji was about half that height because of his kneeling position before His Lordships) and carved in beautiful white marble. When They first arrived in the temple hall, They were dressed in white cloth for abhiseka and had Their lotus eyes covered in white cloth. Even with Their eyes covered, They were astonishingly beautiful, but Their beauty increased manifold after the cloths were removed. These Deities were carved by the best sculptors in Jaipur, India—the Deity capital of the world—under the direction of Srila Gurudeva himself, so everyone expected Them to be beautiful, but no one could imagine just how beautiful They would be until that moment of Their unveiling.

Then the abhiseka of the Deities was performed with great pomp and circumstance—each consecrated with profuse amounts of milk, yogurt, sugar, honey, and ghee and then finally bathed in water. Afterward, the altar was closed for over three hours while the Deities were affixed to Their stands on the altar and dressed in Their inaugural outfits. Meanwhile, Sripad Vana Maharaja performed a grand fire sacrifice on the land behind the temple.

Next, the devotees all gathered in the temple hall in anticipation of the first darshan of the Deities. Various members of the congregation sang beautiful bhajans for the pleasure of Their Lordships. Every time the curtain moved, the devotees would look toward the altar hoping for a glimpse. It was taking longer to dress the Deities than expected, and everyone was becoming anxious. 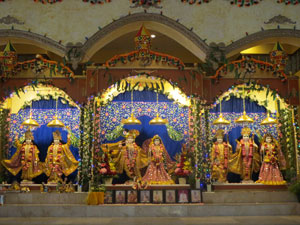 When the curtain was finally opened and the Deities were revealed in all Their inaugural finery, the calls of "Jaya!" and "Haribol!" throughout the temple was thunderous. The three sets of Deities—Sri Sri Gaura-Nitai, Sri Sri Radha-Govindaji, and Sri Sri Sita-Rama-Laksmana-Hanuman—were dressed in matching rose-colored outfits that were hand-crafted and embroidered in Vrindavan. Everyone in attendance was likely hard-pressed to find words to describe Their lustrous beauty. Particularly with Sri Govindaji, Srila Bhaktivinoda Thakura's song "Bandhu Sange" came immediately to mind. If one was not careful, Govindaji would immediately steal the heart.

The Deities were offered more than two hundred and fifty cooked preparations, including over one hundred varieties of sweets. Afterward, the Deities' dedicated pujari, Puneet Prabhu, who was trained under the guidance of Sripad Premananda Prabhu in India, performed the madhyana-arati ceremony with exquisite artistry. 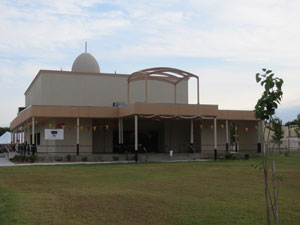 In honor of the cultural milestone for the greater Houston community, the Mayor of the City of Houston, Annise D. Parker, proclaimed Saturday, July 13th as "Sri Govindaji Gaudiya Matha Day." Additional tributes were given by P. Harish, the Consul General of India, and by representatives from other religious and cultural organizations throughout Houston, including BAPS, Meenakshi Temple, OCC, HWS, Sanatan Dharam Radio, Living Planet Foundation, and others.

On the last day of the festivities, over one hundred families from the Houston community participated in the performance of a 108 Kunda Visnu-homa ceremony, for which twenty-eight elaborate fire pits were constructed on the temple premises. Priests chanted Vedic mantras in accompaniment to various offerings made to the sacrificial fire.

The final event of the inaugural celebration was a video tribute to Srila Gurudeva, the founder of the International Gaudiya Vedanta Society and initiator of the Sri Govindaji Gaudiya Matha project. The video chronicled Srila Gurudeva's visits annual and bi-annual visits to Houston from 1996 through 2010 and narrated his broad vision for the temple in Houston. 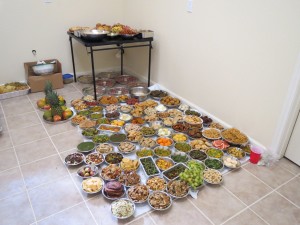 It was only by the causeless mercy of Srila Gurudeva that such a massive undertaking was completed in such a short period of time. The new 15,000 square-foot temple structure was built in only two years. The members of the congregation as well as other community supporters pitched in their unique skills and talents, and everyone worked together harmoniously for the sake of fulfilling Srila Gurudeva's desires.

In line with Srila Gurudeva's vision for the Sri Govindaji Gaudiya Matha, the devotees are proceeding with plans to develop an on-site auditorium, school, library, restaurant, book store, guest quarters, botanical gardens, and more. There is much work to be done and many services available for those interested to serve. For further information, please visit the temple website at www.sggm.org or call the temple at (832) 464-4686.