An Invitation to Develop and Expand the Sri Rupa Goswami Conference 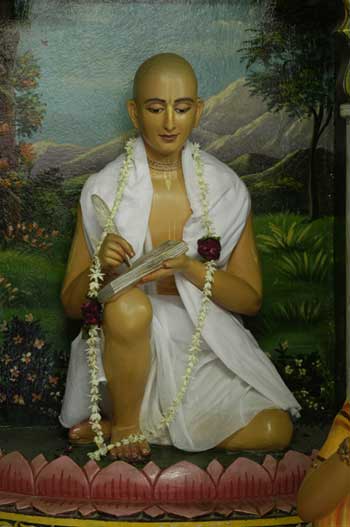 An Invitation to Develop and Expand
the Sri Rupa Goswami Conference

Nearly thirty years ago, Srila Bhaktivedanta Narayana Maharaja began a yearly three-day conference to discuss the glories of Srila Rupa Goswami. It continues to this day and no lockdown can prevent this. Now however, it may be difficult for a large assembly of Vaishnavas to gather or for devotees to travel to Vrindavana to attend the Rupa Goswami Conference. The world has changed very quickly. But even if the present restrictions were not in place, most devotees are not able to regularly travel to Vrindavana to attend the Conference.

For these reasons, there has been growing interest in devotee communities locally developing their own seminars and conferences dedicated to exploring, analyzing, glorifying, and relishing the life and writings and impact of Srila Rupa Goswami.

What makes a conference different from devotees getting together to talk? The English sessions of the Rupa Goswami Conference were begun in 2005 under the direction and guidance of Srila Narayana Maharaja and with the advice of Bhakti Swarupa Damodar Maharaja. One of the first things I learned from both Srila Gurudeva and Srila Swarupa Damodar Maharaj was that conferences are meant to influence people. They are structured. They are formal. They give importance to their subject.

I have been asked to write a comprehensive guide to putting on such a conference. I do not think that is possible or advisable, as each conference should be organized according to the needs of its community and the inclinations of its organizers. However, I have written an overview of the Rupa Goswami Conference in Vrindavana: its background, purposes and organization, in the hopes that it may inspire others in this endeavor and that our experience may prove useful to their conferences.

I wish you all good fortune in your endeavor to serve Sri Guru and our parama, parama, paramaprestha gurudeva, Srila Rupa Goswami Prabhupada.

Srila Rupa Goswami is revered in the Vaishnava community as the chief of the Six Goswamis, the direct disciples of Sri Chaitanya Mahaprabhu. Rupa Goswami understood the inner mood and heart’s desire of Sriman Mahaprabhu, and has expressed this in his voluminous literatures. His writings comprise the theology of Gaudiya Vaishnavism.

Srila Gurudeva made it a point to be inclusive. He invited respected Sanskrit professors and pandits, research scholars, ascetics, leaders of the four sampradayas, and lifelong practitioners to gather and hear one another speak about Srila Rupa Goswami.

The conference continues to this day on the disappearance day of Srila Rupa Goswami. The evening session is conducted in Hindi and the morning session in English. It is the premier Vaishnava conference in Vrindavana, and it is considered an honor and privilege to be invited to speak. Anyone who presents is aware that they speak not only before the foremost scholars of Srila Rupa Goswami, but also in front of the most learned audience in the world.

Speakers are invited well in advance, first verbally if possible, and always with formal letters. During the course of the year, I meet as many prospective speakers as I can to interest, encourage, and prepare them. Devotees in our dhara are all rupanugas, and it is incumbent upon us to be able to glorify Srila Rupa Goswami. It is our spiritual birthright.

Generally, I cast a wide net and invite anyone who shows interest, because if someone has a genuine desire to glorify Srila Rupa Goswami, they will do it well. It is wonderful to have experienced speakers, but some of our most interesting and popular speakers have been those with no experience at all. Often prospective speakers will ask what they should speak on. Attached, please find a list of topics from previous conferences.

Following Srila Gurudeva, I aim for varied representation of speakers and try to include sannyasis, brahmacaris, Sanskrit pandits, devotees of other mathas and temples and locations, disciples of different gurus, devotees of other sampradayas, academics, and representatives of various organizations. I try to have half the speakers be women, but it rarely turns out that way. If I were not in Vrindavana, I would add the category of Vrajabasis to the list.

The speaking time in the Hindi session is between 5:30 and 8 p.m., and between 9 a.m. and 12:30 for the English session. In the English sessions, speakers are limited to 20-minute presentations, with pre-arranged exceptions, usually the last speaker. The Hindi program does not have such a set rule, but it works out that most speakers take that amount time or less. All speakers must be advised of the time limit when they are invited, and it is advisable to ask first-time speakers to prepare for this by timing themselves.

It is traditional to begin such assemblies with mangalacarana prayers and kirtana. We also sing the bhajanas that glorify Srila Rupa Goswami, such as Yan Kali Rupa and Sri Rupa Manjari Pada, and we begin our conference with a simple aratika.

I do recommend having a moderator and a making a Program. A moderator introduces the speaker and, at the end of the talk, thanks him or her for coming and quickly summarizes the main points of the presentation. We give gift packets to the speakers after their talk. Other conferences give these packets upon arrival. At least offer pencil and paper for taking notes. A moderator’s job is to keep the conference running on time, and it is especially important to make sure each speaker finishes on time. Srila Gurudeva would use karatalas to indicated the end of the allotted time. I have found a “5 Minutes” card and a “Time” card work best for me. The Program lists the speakers, the order of their appearance, and the titles of their talks. It could be as simple as a typed sheet.

We have a sound system, video and audio recording systems, and a projector and screen. A dedicated person films and streams the conference live on Facebook.

We serve breakfast before the conference and there is always prasadam and water available during the program. Without exception, people who sit through the entire morning session prefer chairs to cushions on the floor. We do provide floor seating, but it is never comfortable enough for three or four hours.

If possible, a journal of conference papers should be published. This will generate interest and respect for Vaishnavism in the line of Rupa Goswami.

If the list of things we do for the Rupa Goswami Conference in Vrindavana seems daunting, please remember that the English sessions are in their 16th year. It started out formally, but very simply, and each year, by the mercy of Srila Gurudeva, amazingly, it has become better. We have a devoted and qualified team of devotees who organize the conference, without whom it would not be possible. The jewels of the conference, though, are the presentations by our esteemed speakers. These talks, which are interesting, fascinating, learned, heartfelt, informed, inspiring, and meditative, are pushpanjali offerings to Srila Rupa Goswami. This entire conference is, in fact, the pushpanjali offering of Srila Narayana Maharaja to Srila Rupa Goswami, and it is our good fortune to serve in that endeavor.