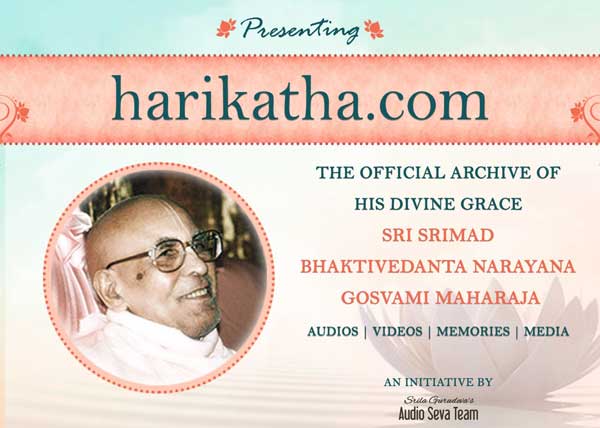 Srila Gurudeva's rasika harikatha, replete with Gaudiya Vaisnava siddhanta was indeed his hallmark. Devotees from different institutions flocked to him to hear him speak. On any usual day, he gave 3-4 classes and darsanas. So, as per current estimates, the number of audio files of his recorded harikatha, just in the last 15 years of his preaching is between 10,000-11,000! The website currently hosts 1,100 Audios, and progressively more and more audios will be uploaded as soon as they are finalised. We expect to have 3,000+ audios ready by the end of 2021. We expect to launch all 10,000+ lectures by December 2023. This website will eventually also host Srila Gurudeva's organised Video Archive, Memories Archive as well as other Media like News coverage, letters, etc. all of which will be populated over the coming years.

??? ??????? ?? ???????? ???? ? ????-???????? ??????????, ??????, ???????? ??? ???????? ???????. Right now, in the first (basic) version you will find that the filtration and search features are instantly applied as you type or tick the options in the filter panel. The search query that you type is sought through all the recording attributes like title, date, location, category, including the topics as well. For instance, if you are looking for a lecture where Srila Gurudeva spoke about 'anyabhilasita sunyam', the results will include even those files which don't have these words in the title, but are listed in the topics. You can additionally filter the audios on various parameters such as Sound Quality, Srila Gurudeva timings, Duration, Category, Language, Location & Year. Soon, we will also add many lecture series such as Sri Vilapa Kusumanjali, Raya Ramananda Samvada, Venu Gita, Gopi Gita, Sri Brhad-bhagavatamrtam, etc.

Once you start playing any audio, the playback continues in the background while you can continue to filter and search for other audios. Soon we will add a floating audio player with more features. Currently each file can be downloaded individually, but going forward we will be adding a bulk download option. Also, brief topics for each lecture, transcripts, and many more usability features will be added in the upcoming months.

Although we have tried our best, we are sure there will still be ways to improve the audios and we look forward to your inputs - whether it is proposing a better title, or looking into audio content issues. To enable this, the website has a feature where feedback can be provided for each audio specifically. Use the Feedback button in the search result item for this. You can also give general feedback on the website using the 'Contact Us' menu item. Feel free to report any issue or propose an improvement or a new functionality. We will share a video with a tour around the website soon.

Although in the later years of Srila Gurudeva's preaching, lectures were officially recorded in an organised manner, this archive, to a great extent, has been aggregated from personal cassette recordings of various devotees. We had to work with the raw material we had. You may notice several inconsistencies in the recordings - Some devotees only recorded when Srila Gurudeva spoke and stopped recording when other speakers, called upon to speak by Srila Gurudeva, spoke. Some devotees had good quality recorders which auto-changed the cassette side so that none of the recording was lost while changing sides. But in many cases some katha was lost while changing the cassette side. Thus we have a lot of cases of abrupt beginnings and endings. Some devotees recorded in bits and pieces on different cassettes. This made it very difficult for us to piece together those lectures, especially if some of those cassettes were missing or corrupt. If low quality cassettes were used, then the voice frequencies are impaired, some are warped and distorted. In such cases we just saved whatever we could.

- As far as possible, whatever Srila Gurudeva spoke, whether in a lecture or casually, has not been cut. Additionally all audios of kirtanas or other speakers recorded in Srila Gurudeva's presence have been retained. The only cases where they have been cut is when they are inaudible.

- When some part of the lecture is missing in between the lecture, we have left a 2 second silent space to indicate discontinuity.

- Some recordings originally have glitches in them, which mostly sound like a pinched audio.

We have left these as they are.

- For the convenience of the listeners, the audios have been given a sound rating: Good, Average, Barely Audible.

- Some recordings had very bad quality original sound, we have tried to restore them as much as possible, but the output may not be well-audible. They have been sound-rated accordingly.

- In some bad quality sound files which have recurring speed, distortion, or other such issues, we tried our best but not much could be done to make them clearly audible. Yet, these tapes have been retained for posterity. They have been given a sound rating accordingly, to call the listeners' attention to the fact that they can expect audibility  issues.

- Srila Gurudeva Timings are indicative of how much Srila Gurudeva spoke in that file. They have been mentioned as 100% if its a conversation with devotees.

To see the detailed process followed for each audio, please watch: https://youtu.be/R-ZyCz38cEY (Please note: this video was made in June 2019)