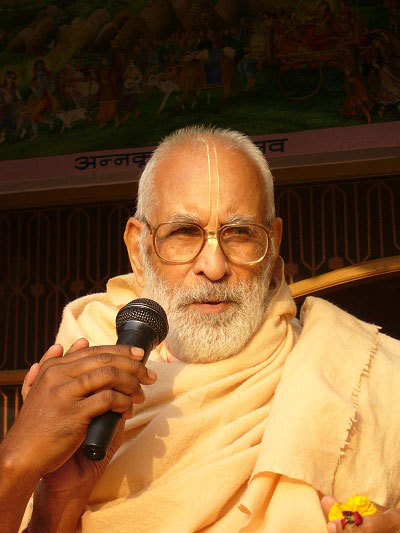 [This year, 2021, July 25th and 26th ( see calendar) is the first day of Caturmasya, the four month period each year from July to November, in which devotees observe certain rules and regulations in order to advance in their bhakti. Srila Bhaktivedanta Narayana Gosvami Maharaja speaks about Caturmasya each year. The lecture below was given on the first day of the second half of Caturmasya at Sri Kesavaji Gaudiya Matha in Mathura, India, on September 13, 2000. Srila Maharaja’s lecture was on the topics of Sri Visvarupa Mahotsava and the sannyasa ceremony of Srila Bhaktivedanta Svami Prabhupada.

(Some of the items to fast from are included at the bottom of the lecture excerpt. -ed)]

Today is a very sacred day in our line. Sri Caitanya Mahaprabhu took sannyasa and began to search for his brother, Sri Visvarupa. While searching, He found out on this day that His brother had been in Pandarapur, and there he had left his body and had taken samadhi on the bank of the river Bhima. Then, although Mahaprabhu was observing Caturmasya-vrata very strictly for four months, He shaved off His hair on this day. Before this year, He had never shaved for these four months, nor did He cut his nails. He observed all the rules and regulations of Caturmasya.

There are many items that are not allowed during Caturmasya, such as leafy vegetables in the first month, yogurt in the second month, milk in the third month, and mustard oil in the fourth month. Besides this, throughout all four months, tomatoes, eggplants, and several other foodstuffs are prohibited.

Sri Caitanya Mahaprabhu used to follow all these rules very strictly, but nowadays we see that devotees don't follow. Our Guru Maharaja and Srila Prabhupada Bhaktisiddhanta Sarasvati Thakura were very strong in this regard. Srila Prabhupada said, "Take my photo during the four months of Caturmasya-vrata, to show that I never shave at that time. Always keep it; otherwise so many so-called disciples will say, 'Oh, Prabhupada never observed Caturmasya-vrata'."

By his causeless mercy, Parama-pujyapada Srila Bhaktivedanta Svami Maharaja gave concessions in the Western countries, and that is the only reason he also used to shave. The Westerners could not follow strictly at that time. That is why he allowed tomatoes and eggplant, that is also why he used to take them, and that is why he also allowed carrots.

I am therefore also giving concessions, not here in India, but in Western countries. If the devotees there like, they can take these items; but we don't take them. We should strictly follow our proper line from Mahaprabhu to Srila Prabhupada Bhaktisiddhanta Sarasvati Gosvami Thakura and my gurus, Srila Bhaktiprajnana Kesava Gosvami Maharaja and Srila Bhaktivedanta Swami Maharaja. In Western countries some concession may be given, but here in India we are very strict. If we cannot follow this, then how can we follow Sri Krsna, and how can we serve Sri Sri Radha and Krsna? Mahaprabhu shaved – after two months – and we follow this.

Restricted foods during the entire four months of Caturmasya:

Particular foods that are restricted during each of the four months:

Foods that can be taken all days of the year, including Ekadasi and Caturmasya: