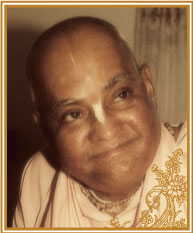 His Divine Grace Om Vishnupada Sri Srimad Gour Govinda Swami Maharaja made his appearance on September 2nd 1929, in the village of Jagannatha-pura, not far from Jagannatha-puri Dhama, Orissa, India. Sri Braja-bandhu, as His Divine Grace was then known, grew up in the village of Gadai-giri, where he practiced devotional service to Krishna from his early childhood. His grandfather was a paramahamsa, whose only business was to chant Hare Krishna and cry before the Deity of Krishna, known locally as Gopal Jiu. He taught Braja-bandhu how to count by chanting the Hare Krishna maha-mantra on his fingers.

In his childhood Braja-bandhu would travel with his uncles from village to village chanting Hare Krishna and singing the songs of Narottama das Thakura. The Giri family, in which Srila Gour Govinda Swami appeared, have been known among the most famous kirtana performers in Orissa since the time of Syamananda Prabhu. Three hundred years ago in the temple register of Jagannatha Puri, the King of Orissa wrote that the kirtana party of Gadai-giri should come perform kirtana for Lord Jagannatha whenever possible. In Orissa they are seen as kirtana-gurus.

From the age of six, Braja-bandhu worshiped the Deity of Gopal by making galands and sometimes, under the light of a candle, singing hymes for Him from palm leaf manuscripts. He would never take any food that was not offered to Gopal.

By the age of eight, Braja-bandhu had read the entire bhagavad-gita, Srimad-bhagavatam and Sri Caitanya-caritamrta and could also explain their meanings. At night many villagers would come to hear his recitation of the Oriya Bhagavata, Ramayana and Mahabharata. In this way, from the very beginning of his life he was absorbed in chanting Hare Krishna, studying Vaishnava literature and worshiping his beloved Gopal. His natural inclination to the Lord indicated his future devotional life, just as the morning shows the day.

After the death of his father in 1955, he became responsible for maintaining the family. And when he entered the grihasta ashrama, on the request of his widowed mother the burden increased. He met his wife, Srimati Vasanti Devi, for the first time during the marriage ceremony. Owing to financial constraints he could not avail himself of university education. But he prepared himself at night to attend the examinations. Within two months he successfully graduated, acquiring the second position among all the students of Utkal University. In this way he completed his B.A. and later his B.Ed. Despite many responsibilities, his devotion for Gopal never slacked. Always keeping Krishna in the center, he would daily speak to his family from the bhagavad-gita and early in the morning worship Tulasi. Also during this time as a householder, when he adopted the profession of a school teacher, he would take every opportunity to speak to his students, about Krishna and the devotional principles. Thirty years later, some of his students were to become his disciples.

On April 8th, 1974, his deep love for Krishna called him to renounce worldly life. At the age of 45 he left home and relatives in quest of spiritual perfection. Carrying only a bhagavad-gita and a begging bowl he wandered around India for one year and visited many sacred places along the river Ganges. He was searching for that person who could help him develop an understanding of the maha-mantra. After many philosophical debates with mayavadi sannyasis and yogis in the Himalayas, he proceeded on foot to Vrindavana, the sacred lila-bhumi of Sri Sri Radha and Krishna, thinking that in Krishna’s dear abode his desire would be fulfilled

Two weeks after arriving in Vrindavana he saw a signboard with the words International Society for Krishna Consciousness, Founder-acharya A. C. Bhaktivedanta Swami Srila Prabhupada. Then he met a group of Western devotees who gave him a copy of back to Godhead magazine. When he read the contents describing the glory of divine love for Krishna, his heart became anxious to meet the founder of the movement, Srila Prabhupada. At last he was to meet his eternal spiritual master, whose association he had been awaiting for such a long time.

Srila Prabhupada had just finished his lunch when Gour Govinda Swami entered the room and paid his obeisances. Srila Prabhupada then asked him, “Have you taken sannyasa?”

In 1975, at the opening of ISKCON’s Krishna-Balaram Temple in Vrindavana, Srila Prabhupada accepted him as a disciple, gave him the name Gour Govinda and awarded him the sannyasa order. Then Srila Prabhupada sent him to preach in Orissa, and construct a temple on the newly donated property in Bhubaneswar.

At that time, the donated land was a wild jungle full of mosquitoes, snake and scorpions. It was so far from the city center that even during the daytime people were scared to visit out of fear of dacoits. But Srila Gour Govinda Swami, considering the desire of Srila Prabhupada his life and soul, was undaunted and worked with unwavering determination to fulfill it. Sometimes residing in the storeroom of a tea dealer and even sometimes sharing a small hut with the road construction workers, he began translating Srila Prabhupada’s books into Oriya as he had been instructed.

Spreading Krishna consciousness, Srila Gour Govinda Swami would visit house after house, office after office, in and around Bhubaneswar, sometimes walking sometimes riding on the carriage rack of a bicycle peddled by a local student, who later became his dear disciple, Sacinandana dasa. In this way he collected some small donations and with his own hands constructed a thatched hut on the donated property.

In early 1977 Srila Prabhupada came to Bhubaneswar. Although arrangements had been made for Srila Prabhupada to stay comfortably in the government state guest house, Srila Prabhupada at once rejected this proposal. He said, “I will only stay where my disciple child Gour Govinda has built a mud hut for me.”Srila Prabhupada stayed in Bhubaneswar for seventeen days, during which he laid the foundation stone of the temple-to-be on the auspicious occasion of Lord Nityananda’s appearance day. This was Srila Prabhupada’s last founded project.

In 1991, after sixteen years of determined endeavors, Srila Gour Govinda Swami fulfilled the instruction of his spiritual master with the opening of a magnificent temple of Sri Sri Krishna-Balarama which now attracts thousands of people! to Krishna consciousness. Srila Gour Govinda Swami said “I have opened a ‘crying school’ here in Bhubaneswar. Unless we cry for Krishna, we cannot get his mercy.” This was the message he preached so vigorously all over the world during the last ten years of his manifest pastimes.

Although Srila Gour Govinda Swami was always meek and humble in his personal dealings, in his classes on Srimad-bhagavatam he would roar like a lion, smashing the pride and cutting the misconceptions from the hearts of his disciples. Sometimes he would read an apparently basic philosophical statement from Prabhupada’s purports. Then he would laugh like a child and say, “Here the topic of krishna-prema comes up, but it requires further explanation.” Then he would astound the devotees by giving more and more profound explanations of the same sentence for two or three hours. On one such occasion he said, “Look, Krishna is laughing at me because I am trying to completely describe this topic, which is unlimited.”

Srila Gour Govinda Swami’s knowledge of scripture was formidable. He would substantiate everything he said with evidence from all over the Vedic literature. Sometimes he would question a disciple and if the disciple could not answer with reference to the scriptures, Srila Gour Govinda Swami would at once exclaim, “He is a cheater. Don’t be a crooked person. A Vaishnava quotes authority.”

On February 9th, 1996, the holy appearance day of Srila Bhaktisiddhanta Sarasvati, two senior devotees requested an appointment to see Srila Gour Govinda Swami. They had never spoken with him before, but they had become eager to hear from him after reading some of his books. As if by providential arrangement, they entered his room at 6.00 p.m. and submissively inquired, "Why did Caitanya Mahaprabhu stay in Jagannatha Puri?" He laughed with delight and began to explain the confidential significance of Mahaprabhu's pastimes. In anser to this question he lovingly described the pain of separation felt by Radha and Krishna when Krishna was away from Vrindavana. He had often narrated this moving pastime as recorded in Chapter Eight of this great work, "The Embankment of Separation". Enchanting all the devotees in his room with the nectarean topics of Krishna, he gradually unfolded the pastime to the point where Radha and Krishna were finally united after Their long separation. He described how Krishna became so ecstatic upon seeing Radharani that He manifested a form with big round eyes, known as Lord Jagannatha. With a choked voice he said, "Then the eyes of Krishna fell upon the eyes of Radharani. Eye-to-Eye union." Overwhelmed with love for Radha and Krishna, he apologized with folded hands, "Please excuse me, I cannot speak". In a barely audible voice he gave his final instruction: "Nama Koro! Nama Koro! (Chant the holy name)" All the devotees began to chant as their spiritual master lay back on his bed, breathing very slowly and deeply. A servant nearby placed a picture of Gopal Jiu [his childhood deity] in his hand. Then, gazing lovingly at the picture of his worshipable deity, Srila Gour Govinda Swami called out, "Gopal!" and departed for the spiritual sky to be united with his beloved Lord.

Every day before Srimad-Bhagavatam class, Srila Gour Govinda Swami would sing a song he had learned as a boy. Now his prayer was fulfilled.

"O supremely blissful Madhava! The nectar is coming from Your lotus feet. Drinking that nectar, I blissfully sing 'Hari! Hari!' With the name of Hari I am binding a raft on which Lord Jagannatha will ferry me across this ocean of material existence. My mind always remains at the lotus feet of that Lord Jagannatha who has very large round eyes. In this way, I call out "Ha Krishna!" and give up my life. O husband of Radharani, please deliver me."