All Glories to Sri Sri Guru and Gauranga!

Some of you must have heard the sad news that our dear godsister Bhadra didi from Moscow, Russia passed away under tragic circumstances on the night of 1st May. Many devotees who were having her association during many festivals in India and Russia, remember her constant desire to serve devotees, inexhaustible enthusiasm and wonderful qualities.

Even more in that regard can be said about the latest (2008) Navadwipa Mandala Parikrama – Bhadra Didi was especially inspired and happy then. After coming back to Russia from Navadwipa Parikrama, she was able to listen to the wonderful harikatha from Sripad BV Vana Maharaj, who was preaching in Moscow just before her departure. 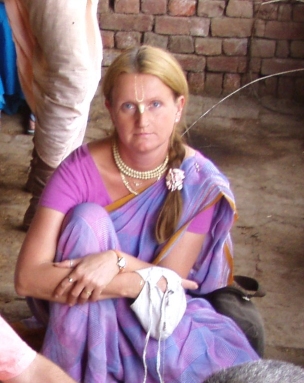 Those days, she was so much sharing with her friends everything that was reminding her about Vrindavan. She was so often remembering the holy Dhama then…

At about 3 PM Bhadra didi was in a van, being driven to Moscow preaching centre, trying to get there on time to see Sripad Vana Maharaj off. Under very unfortunate circumstances, she had a severe car accident on the way. As a result, she had an open brain injury and was delivered to hospital unconscious. Just before the accident, Bhadra didi was loudly shouting, 'Krishna! Krishna! Krishna!' several times.

After having spent 10 days and 9 hours in resuscitation department, without coming out of coma, at midnight at the beginning of 1st May, she left her body.

All Russian (and not only!) devotees who knew her were praying for her recovery during all her 10-day coma period. Srila Gurudeva sent her a letter with his heartly blessings immediately after he knew about her critical condition, and also after her departure Gurudeva gave her blessings to have very high class sadhu-sanga in her next birth.

Bhadra Didi joined Krsna consciousness movement at the beginning of 90s in Moscow. She was staying in ISKCON temple in Sukharevo, Moscow area, for quite a long time. Although the conditions of life in the temple were quite austere at that time, nevertheless she was maintaining strict sadhana. Every morning she was getting up long before 4 AM, taking cold bath even in the winter time, following all temple program and then serving Krsna and devotees all day tirelessly. 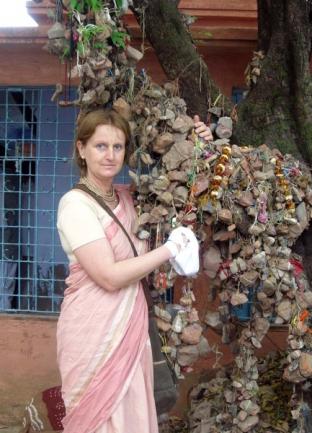 For five or six years she was collecting donations at markets and companies headquarters, in order to maintain Moscow Sukharevo ISKCON temple. About a hundred brahmacaris were staying at the temple at that time, most of them being actively involved in preaching. Bhadra didi was constantly providing them with food, outerwear, footwear, etc. Often together with other devotees she was going village to village, organizing preaching programs, distributing books, and bringing back loads of bhoga. When she was coming to food markes for collecting, some salespeople, having seen her even at the distance, were at once calling her to their counters, willing to give her a donation. Everybody was treating her with great love and affection.

Bhadra didi came to our Srila Gurudeva's lotus feet in 1999. She was in the first group of Russian devotees who had come to Vraja Mandala Parikrama 1999.

Since then, she was actively helping in many projects of Srila Gurudeva, such as building temples in Govardhan and Navadwip, as well as financing Russian book publication. Also, she was constantly helping Russian devotees purchasing tickets for flying to India, arranging for good group deals for them, etc. She was also actively helping Sripad Rasananda Prabhu organizing Russian-speaking devotee groups for parikramas of Vraja Mandala, Navadwipa Mandala, Jagannatha Puri, Jaipur and other holy places.  Many senior Vaisnavas of our sanga whom she was serving personally or just taking their association, remember her with great love. The tragic news was just like a thunderbolt for them.

We would like to conclude this article quoting the words of Srimati Sasikala Didi, an elderly Vaisnavi from Mathura, "Everything happened in such an auspicious way for Bhadra dasi – first she came and performed Navadwipa Parikrama, then visited Jagannatha Puri, then Vraja Mandala, and now, being completely pure, she can leave this body easily and obtain a new one in Vraja."