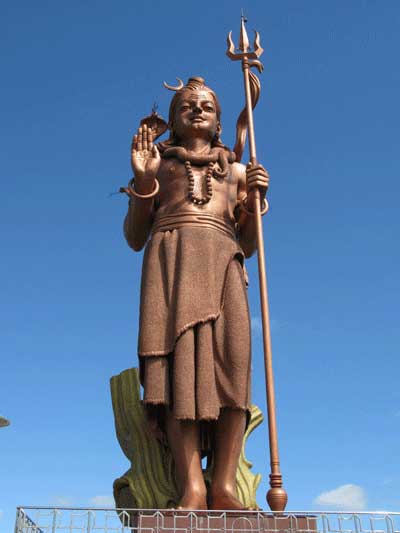 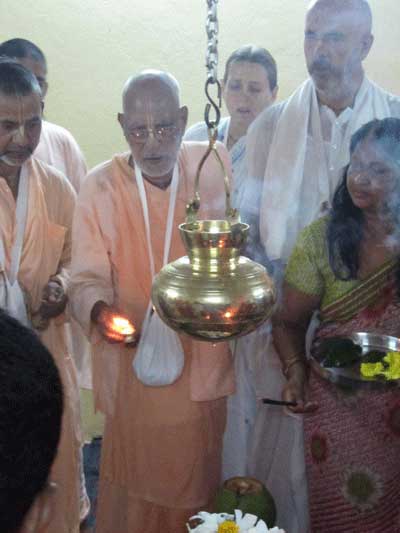 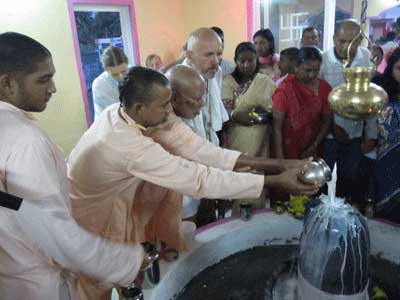 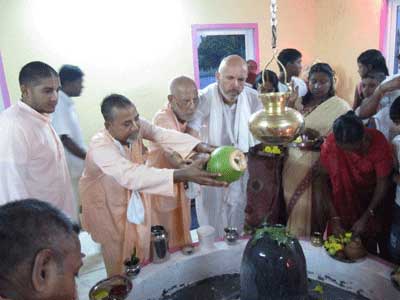 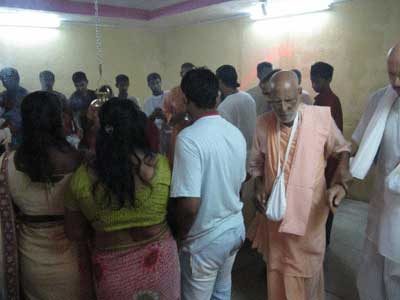 On the morning of Sri Siva Caturdasi, Srila Gurudeva visited a local Siva mandir to perform worship. He first bathed the Siva linga with consecrated water, then milk, and then the water from a young coconut. After that he offered flowers and a flower garland, some daksina (money), and then he offered arati with incense and a ghee lamp. He completed his worship by circumambulating Sivaji four times while chanting:

[“O gatekeeper of Vrndavana! O Soma, O you whose forehead is decorated with the moon, and who is worshipful for the sages headed by Sanaka, Sanatana, Sanandana, and Narada, all glories to you! O Gopisvara! Desiring that you bestow upon me prema for the lotus feet of Sri Sri Radha-Madhava who perform joyous pastimes in Vraja-dhama, I offer obeisances unto you time and time again.”]

Prior to leaving the mandir, Srila Gurudeva offered obeisances to Nandi, the bull-carrier of Lord Siva. 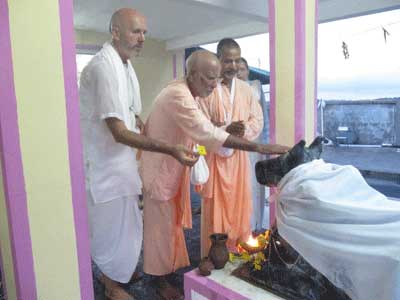 When we returned to Srila Gurudeva’s bhajan kutir, Srimati Vrnda devi told Gurudeva that she had noticed him offering some prayers also to Nandi ji, and asked what was he praying for. Srila Gurudeva replied that he was requesting Nandi with folded palms to pray to Siva ji that we may obtain his mercy in his form as Sri Gopisvara Mahadeva (Lord Siva in the form of a Vraja gopi.) He said, “What mercy can we receive from Gopisvara Mahadeva? He can benedict us with gopi-prema, the pure love of the gopis of Vraja.”

On the previous day Srila Gurudeva spoke briefly about Siva-Caturdasi, the appearance day of Lord Siva. He first posed the question: if Sadasiva is eternal, without birth and death, why are we celebrating his appearance day? Srila Gurudeva then replied by saying that also we celebrate the appearance days of Sri Krsna, Sri Caitanya Mahaprabhu, and Sri Ramacandra, who are also eternal. The fact is that in his naravata-lila (human-like pastimes), on this caturdasi (meaning ‘the fourteenth day of the moon’) Sivaji manifested from the body of Lord Visnu.

Srila Gurudeva then told a couple of short pastimes of Lord Siva:

“Once there was a hunter in the forest. His technique for killing prey was to hide in a tree next to a pond, and when the deer would come to drink the water of the pond he would shoot and kill them. Because he would hide in the tree for some time, he always kept a clay-pot of water with him to quench his thirst. On this particular day he had climbed a bael tree which, unbeknown to him, overhung a Siva linga.

“At the approach of evening, a female deer arrived there. As the hunter raised his bow, and at the same time some water fell from his pot and bael leaves fell from the tree onto the linga of Lord Siva. The doe pleaded with the hunter not to kill her, for she had young baby deer and needed to feed them milk. She promised to return shortly, but the hunter said, ‘You will never return. You just want to run away.’ The doe then promised and added, ‘If I don’t return, all sin will fall on me for not keeping my promise, I must keep my promise and return.’ The hunter agreed, and she left.

“Later in the evening, the husband of that doe arrived at the pond, searching for his wife. The hunter again drew his arrow to kill that stag, and again, at the same time, some water fell from his pot and bael leaves fell from the tree onto the Siva linga.

“Lord Siva is worshipped in eight praharas (sections of time), four in the day and four at night. The hunter had unconsciously bathed him twice during the first two praharas of the night.

“The male deer pleaded with the hunter not to kill him. He said, ‘I have a wife and children. Let me first see to their welfare; then I will return and you can kill me’. The hunter did not believe his promise, as the doe had not yet returned, but the stag insisted that if he does not return all sin will come to him for breaking a promise, so he would definitely return.

“Upon returning to his family, he saw that the sister of the doe had arrived. She emphatically insisted that she would take the place of the doe and accept death on her behalf, as she had no children. The sister then went to that pond. Seeing her, the hunter drew his arrow, simultaneously spilling water and dropping bael leaves on the Siva linga during the third prahara of the night. By intuition he knew that this was the sister of the doe and said, “I want to kill your sister, not you. She promised to return, so where is she?”

“The sister then returned to the family, and after some discussion they decided to go all together as a family and face the hunter. As they approached, the hunter again raised his bow, and in his haste he dropped water and bael leaves on the linga of Siva ji for the fourth time.

“At that moment, Lord Siva himself manifested from that deity. He said that the hunter had worshipped him in the four sections of the night, although unknowingly. Siva ji was very pleased by his worship. After offering him any benediction he may desire and hearing from him that he asked to be taken to Lord Siva’s abode, Lord Siva took him there.

Srila Gurudeva said that another name of Lord Siva is Asutosa, meaning that he is easily and quickly pleased.

He then continued with another history:

Once there was a demon in the forest who was worshipping Lord Siva with hundreds of bael leaves. Although he had been worshiping for some time, Siva ji never appeared to him. He became so angry that he took an unripe bael fruit and threw it at the murti of Lord Siva with great force. At that moment Siva ji personally manifested and said, ‘You have conquered me by giving a whole fruit. Now you can ask any benediction.’”

Srila Gurudeva said there are so many such histories, and that the ones he had told are from Siva Purana.

He then explained why he performs ekadasi-upavasa (fasting as on the Ekadasi day) on Siva Caturdasi, when other Vaisnavas in our guru-parampara did not.

We asked Gurudeva if there was any special benediction we could ask from Lord Siva on this day. He replied that we should not ask for any material favours.

Rather, we should ask Gopesvara Mahadeva only to bestow upon us Vraja prema. He again quoted the prayer beginning with “Vrndavanavani-pate!jaya soma soma maule.”

In relation to this verse, he then said that Lord Siva gave a boon to the gopis after they had worshipped him at Sunhera Kadamba Khandi near to Varsana. Srimati Radhika gave Her own necklace to Lord Siva and he became very happy. He blessed them, saying, “Krsna will always be controlled by you gopis.”