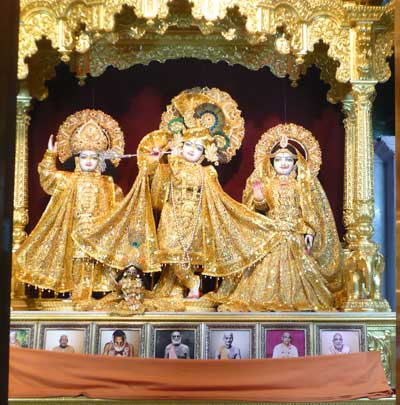 After enthusing the 15,000 pilgrims during Navadvipa Parikrama, Srila Bhaktivedanta Narayana Gosvami Maharaja took his associates to Janakapuri, Delhi, where he stayed for a few days in his Sri Ramana-bihari Gaudiya Matha. There he took his daily walks in the park in the early morning, elevating all the innumerable varieties of animals, birds, insects, microscopic organisms, and humans by his presence. He gave one public program, where about 500 people attended. He also gave spiritual initiation to about fifteen aspiring devotees. 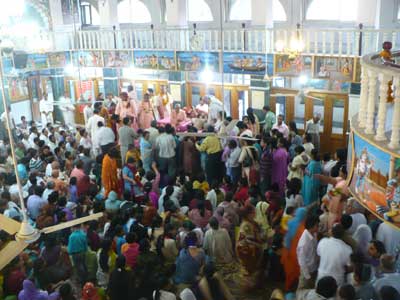 In his lecture he elaborately explained the verse:

[“After many, many births and deaths one achieves the rare human form of life, which, although temporary, affords one the opportunity to attain the highest perfection. Thus a sober human being should quickly endeavor for the ultimate perfection of life as long as his body, which is always subject to death, has not fallen down and died. After all, sense gratification is available even in the most abominable species of life, whereas Krsna consciousness is possible only for a human being.” (Srimad-Bhagavatam 11.9.29)]

After a few days in Delhi, Srila Maharaja went with his party to Govardhana, where he resided at his Sri Giridhari Gaudiya Matha, to rest and work on his translations of Vedanta Sutra and Srimad-Bhagavatam before leaving for his 33rd world preaching tour. 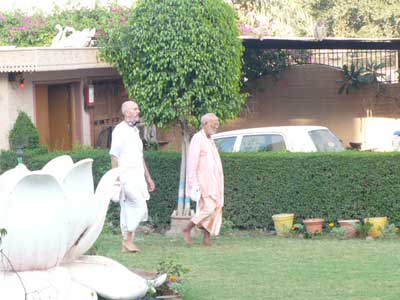 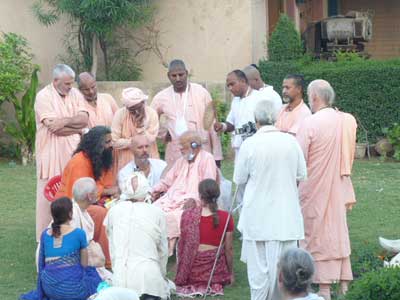 While in Govardhana, he gave some darsans and initiations, and in the evenings he took japa walks and sometimes spoke with devotees and guests in the temple garden. He also took his daily morning walks, where (as he regularly does on his morning walks throughout the world) he answered the numerous questions of the devotees accompanying him.

All these morning walks (audio and visual), as well as the walks throughout the world, can be downloaded from www.purebhakti.tv. The following is an excerpt from the conversation during his March 14th Govardhana morning walk. In a couple of days you will receive transcriptions of the March 19th and 20th morning walk conversations. 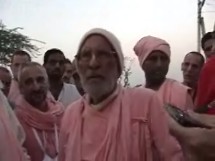 Srila Narayana Gosvami Maharaja: Radha is power. Without power, Krsna is nirvisesa-brahma, He cannot do anything. He is like zero.

Sripad Madhava Maharaja: And when He is with Radhika, He becomes a hero (nayaka).

Sripad Nemi Maharaja: He has His own desires?

Srila Narayana Gosvami Maharaja: It may be so, but without Srimati Radhika, He cannot move here or there. He cannot do anything.

Sripad Madhava Maharaja: Also, iccha (desire) is another kind of power. It is called iccha-sakti (the power by which all of Krsna’s desires are fulfilled). Radhika is the embodiment of all kinds of power.

Sripad Nemi Maharaja: I think you are very pro-Radhika.

Sripad Padmanabha Maharaja: Regarding the same point that Nemi Maharaja is asking about: You are saying Krsna cannot do anything without Srimati Radhika. But sakti (the power) is dependent on saktiman (the possessor of the power). Krsna is saktiman and Radhika is sakti. Just like the sun and the sunrays….

Srila Narayana Gosvami Maharaja: You can say whatever you are saying, but you should try to understand my view.

Sripad Nemi Maharaja: Srila Krsnadasa Kaviraja Gosvami says there is a competition between Krsna and the gopis, and that nobody wins. [*See Endnote 1 and 2] But you are saying that...

Srila Narayana Gosvami Maharaja: Without Radhika, what can Krsna do?

Isa dasa: A devotee asked me how one can determine for sure whether one is experiencing Gurudeva giving instruction in his heart, and not just the mind’s speculation.

Srila Narayana Gosvami Maharaja: Worldly things may come without guru, but paramartha (spiritual) things come by via medium of guru. 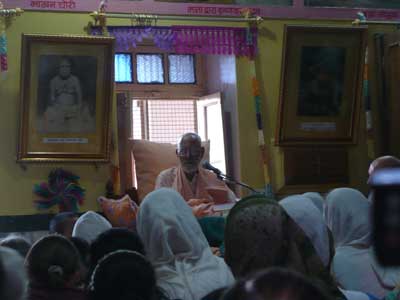 After several days at Govardhana, Srila Narayana Gosvami Maharaja went to Sri Kesavaji Gaudiya Matha in Mathura, to celebrate the Appearance Day of Lord Ramacandra, before leaving for the USA.

He gave a long discourse in the morning of that sacred day, enlightening his audience with the sweet pastimes of Lord Rama. After the class he had the devotees (led by Sripad Tirtha Maharaja) recite together, in beautiful rhythmical tune, the entire Ramayana; and he also participated, in deep meditation. Following the group recitation he conducted Lord Rama’s abhiseka ceremony (bathing with auspicious ingredients), after which there was arati and a grand prasadam feast in Lord Rama’s honor. 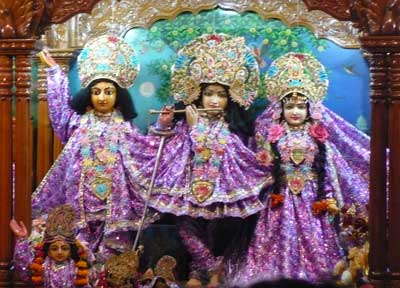 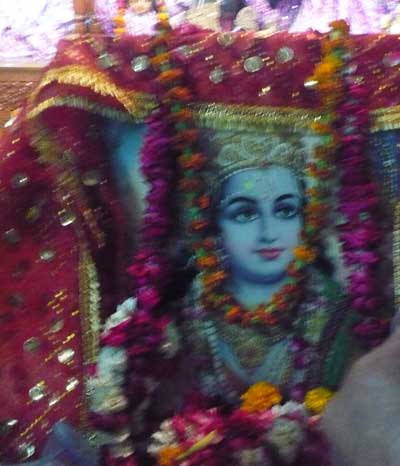 [*Endnote 1: "The beauty of Lord Krsna increases at the sight of the beauty of the gopis. And the more the gopis see Lord Krsna’s beauty, the more their beauty increases. In this way a competition takes place between them in which no one acknowledges defeat. (Caitanya-caritamrta Adi-lila 192, 193)"

“Srila Krsnadasa Kaviraja Gosvami thus describes the competition between Sri Krsna and the gopis, which ended in a draw. Srila Kaviraja Gosvami ‘whistled’ and gave judgment that neither side had won. Actually, we Gaudiya Vaisnavas do not want this. We want the whistle to be blown to indicate Srimati Radhika’s victory. Radhika will be so happy, and we will applaud and celebrate.

“This is the real mood of Srila Krsnadasa Kaviraja Gosvami, Srila Raghunatha dasa Gosvami, and Srila Rupa Gosvami. If Srimati Lalita-devi is the mediator in a game, she will blow the whistle to say it is a draw, that no one has been defeated. But Sri Rupa Manjari will whistle to announce that Srimati Radhika has defeated Krsna.

“It is Sri Krsna Himself who will experience the greatest pleasure when He is defeated, although His friends like Madhumangala and others will not be pleased at all. Kundalata-gopi will also be sorry that Krsna has lost, and Dhanistha-gopi may even faint. Krsna’s defeat causes such friends great distress, and His victory fills them with joy.”]