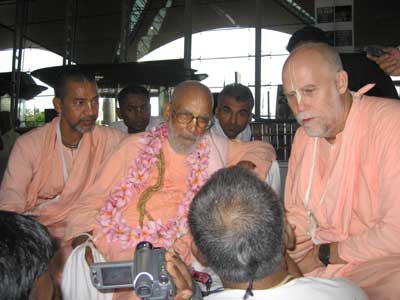 [Rama-tulasi dasa:] There is a story that when Krsna was sleeping in a cave

[Srila Narayana Maharaja:] In Srimad-Bhagavatam there is the history of Kalayavana. Kalayavana was pursuing Krsna. Krsna entered a cave where Mucukunda was sleeping. Mucukunda had previously gone to heaven to fight against the demons on behalf of the demigods, whose commander-in-chief was Kartikeya. Mucukunda won the battle for them, and the demigods told him, We want to give you some benediction, so please ask for one.

Mucukunda asked, Can you give me salvation?

Mucukunda said, I am very tired. I want to sleep, and I want that anyone who awakens me will at once be burned to ashes.

He received that benediction.

Kalayavana also had a benediction  that he would not be killed by anyone in the Yadu dynasty  and Krsna knew this fact. As He was chased by Kalyavana, Krsna saw Mucukunda sleeping in the cave, so He hid Himself there. Chasing Krsna, Kalayavana entered the cave and, thinking Mucukunda to be Krsna, he said, Now You are sleeping? Do not think I will let you go. He kicked Mucukunda, who then awoke and looked towards him, and he was burned to ashes.

[Rama-tulasi dasa:] There is a book about Ekadasi that was written by Krsna Balarama Svami. In that book there is a description of a manifestation of a devi. It states that when Krsna woke up, He saw her with multiple hands.

[Srila Narayana Maharaja:] This book is not authentic. Krsna-Balarama Svami does not follow his own guru, Srila Bhaktivedanta Svami Maharaja. He thinks, I am a brahmana and my Gurudeva was not a brahmana, so I am greater than my Guru. He came to me, but I refused to meet with him. I told him, You dont have any faith in your Gurudeva or guru-parampara. Srila Raghunatha dasa Gosvami was not born in a brahmana family, but he is equal to Srila Rupa Gosvami, Srila Sanatana Gosvami, Srila Raghunatha Bhatta Gosvami, Srila Jiva Gosvami, and Srila Gopala Bhatta Gosvami. Srila Narottama dasa Thakura was not a brahmana by birth, but he was more than brahmana. Krsna-Balarama Svamis thoughts are very bad. Dont read his book.

[Padmanabha Maharaja:] In that Ekadasi book he has collected many stories from different Puranas for each Ekadasi.

[Srila Narayana Maharaja:] We also have a collection of such histories, but not in English. It is in Bengali, but we can translate it into English. That will be authoritative.

[Syamarani dasi:] Srila Gurudeva, this is your new daughter Vrajarani, and this is her seven month-old baby, Bhisma. When he was 6 months old, he could not have a grain ceremony [anna-prashana] with you because his mother was not in the same place as you. She wants to know if he can at least have the part of that ceremony with you; the part where he indicates his future activities. 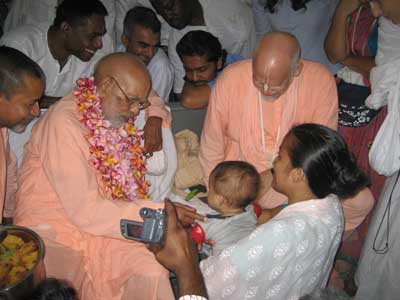 [According to Vedic culture, at this time (called anna-prashana) it is customary to offer the child both coins and books in order to get some indication of the future tendencies of the child. On one side there are coins and on the other side a scripture. At this time the child also receives his first grains.]

[The baby chooses the ring, and Srila Narayana Maharaja immediately taps him on the head with a Siva-tattva book (scripture).]

[Srila Narayana Maharaja:] He will be a rich person.

[Vrajarani dasi:] Even though Bhisma will become rich, will he also become a good devotee?

[Srila Narayana Maharaja (to Syamarani dasi):] One thing  What I told you in confidence about the pictures you were painting, in order that you could paint them, you disclosed to others. That is not good. This should not be disclosed.

[Syamarani dasi:] Yes, I have made a big mistake. I will not do that anymore.

[Devotee:] Gurudeva, this is the wife of your disciple Vijaya prabhu. All her life she has been worshipping Durga-devi. Last night, we showed her your translation and commentary of Brahma-samhita, which explains about the relationship between Durga and Radha and Krsna. She read it. She wants to know how to cut this relationship so that she can worship Radha and Krsna.

[Srila Narayana Maharaja:] You should know who Durga-devi is. Durga-devi is a shadow of Srimati Radhika. Radhika is likened to the soul, and Durga-devi, Kali, is likened to the body. If there is no Radhika, there would be no existence of Kali. If the real thing is not present, there can be no shadow. In order to give some benediction of only worldly things, Srimati Radhika comes as Durga in this world. This world is durga, which means fort  like a jail. *[Endnote 2]

Durga-devi is the protector and destroyer of this world. She can give you wealth, reputation, and other worldly things, but she cannot give Krsna-prema, liberation, or anything spiritual. Only Radhika and Her direct manifestations like Visakha and Lalita can do so.

Durga-devi is not in Goloka Vrndavana. She is only manifested in this universe. There is a manifestation of Srimati Radhika named Yogamaya, who is more like Radhika. It would be better for you to think of Radhika as the reality, and Her shadow as Durga. Whatever Durga-devi will give you will be gone after your death. It will be better for you to take initiation like your husband and worship Sri Sri Radha-Krsna. Then, Durga will be very, very happy with you.

[Sripad Padmanabha Maharaja:] Sometimes disciples ask if they can still keep a Deity of Durga in their house.

[Srila Narayana Maharaja:] They should be one-pointed. If they cannot give this up, they can offer Durga the remnants of Sri Sri Radha-Krsnas caranamrta (water from the bathing of the Deities). Otherwise, they will be cheated.

[Krsna-priya dasi asks in Hindi (question and answer translated by Sundar-gopala dasa in Australia):] Srila Bhaktivinoda Thakura says in Jaiva Dharma that we should only take prasadam that has been offered to Radha and Krsna. He says that bhoga (un-offered foodstuffs) that is offered to the demigods is not prasadam. What is the nature of the foodstuffs we get when we go to the temples of the demigods? What do we call that? Can we eat it?

We should not take ashes of Sankara [Sankara smears his body with ashes in order to show the world the destination of bodies  at death they are burned and turn to ashes. -ed], or any prasadam. We offer obeisances to Sankara. If a pure devotee gives the prasadam remnants of Krsna to Sankara, we will accept that; otherwise not.* [See endnote 4]

In any case, we will not accept ashes [in imitation of Sankara, followers smear their bodies with ashes. ed] or other things that his followers accept. If someone is not wearing tilaka and kanti-mala (tulasi neck-beads), then the messengers of Yamaraja, the god of death, will think, This person is not a devotee of Krsna. They will take him to Yamaraja for punishment. So we should try to wear tilaka and kanti-mala.

[Rama-tulsi dasa:] What happens to the soul after someone dies  regarding both a devotee of Sri Krsna and a non-devotee?

[Srila Narayana Maharaja:] If one is not a proper devotee, then according to his activities he will have to go to heaven or hell. According to his karma he may take birth anywhere. His birth may be as a dog, donkey, monkey or any other animal.

[Rama-tulasi dasa:] Does this take place immediately, as soon as the soul leaves the body? Or, does it take some time?

[Srila Narayana Maharaja:] It depends on what the person has done.

[Rama-tulasi dasa:] My wife passed away on January 5th this year. Where did she go?

[Srila Narayana Maharaja:] She was a devotee, and you and her children are devotees. She was always chanting the holy name, so she will have a human body in a rich devotee family. There, she will easily have a Guru again and she will continue her bhajana.

Krsna is more merciful than Narayana, Visnu, and other incarnations. There is no one more merciful than Krsna. Lord Ramacandra could not give as much honor to ladies as Krsna did. Krsna gave Himself to Srimati Radhika and the gopis. The princesses, the beautiful daughters of kings, had been imprisoned in the jail of Narakasura, but they always remembered Krsna. Krsna came and killed Narakasura, and then told them, You can now go wherever you want  to your husbands, mothers and fathers. They replied, We cannot go anywhere. We want to be the maidservants of Rukmini and Satyabhama in your palace. We will sweep there and perform all the menial services. Krsna said, No. I will accept you as My queens  just like Rukmini and Satyabhama. He married all of them and took them to Dvaraka, and He gave a palace to each. 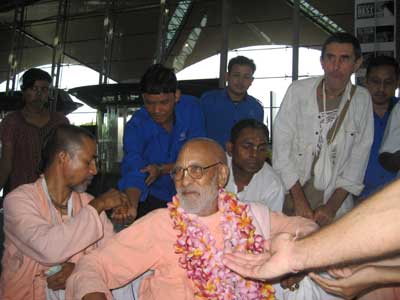 Even the airport workers realized the benefits of receiving maha-maha prasadam.


[Erratum: Before citing the endnotes to this airport darsana, we have inserted this erratum. In the lecture we recently sent out, on the appearance day of Srila Srinivasa Acarya, we made an editorial mistake:

In the Brahma-vaivarta Purana it is said that one who observes fasting on Ekadasi day is freed from all kinds of reactions to sinful activities and advances in pious life. The basic principle is not just to fast, but to increase one's faith and love for Govinda, or Krsna. The real reason for observing fasting on Ekadasi is to minimize the demands of the body and to engage our time in the service of the Lord by chanting or performing similar service. The best thing to do on fasting days is to remember the pastimes of Govinda and to hear His holy name constantly. (Nectar of Devotion Chapter 7)]

[*Endnote 2: Durga is the superintendent of police of this universe. Durga. Durga means the fort, durga. Ga means going, and dur means difficulty. So where you cannot go unless you accept so many difficulties, that is called durga, or fort. So this universe, material world, is just like a durgä. You cannot escape. Conditioned souls, you cannot escape. It is very difficult. Daivi hy esa gunamayi duratyay [Bg. 7.14]. There are rules and regulations. Just like immigration department, security department  same thing. These are simply reflections of the original function of the supreme government. So this is just like prison house. You cannot escape so easily. If you try to escape, then you'll be again punished. The original superintendent is Durga. Durga means the protector of this durga, where you cannot escape. So she is also servant of Krsna. This Durga is fear personified, but still she cannot disobey Krsna's order. (Lecture of Oct. 1974, by Srila Prabhupad a Bhaktivedanta Svami Prabhupada)]

[*Endnote 4: Lord Visnu should be offered everything, and His prasada should be distributed to all the demigods. This practice is still followed in the temple of Jagannatha at Puri. There are many temples of demigods around the main temple of Jagannatha, and the prasada which is offered first to Jagannatha is distributed to all the demigods. The deity of Bhagalin is worshiped with the prasada of Visnu, and also, in the famous Lord Siva temple of Bhuvanesvara, the prasada of Lord Visnu or Lord Jagannatha is offered to the deity of Lord Siva. (Srimad-Bhagavatam 4.7.55 purport by Srila Prabhupada)]