After the completion of the successful 2007 Vraja Mandala Parikrama festival, Srila Bhaktivedanta Narayana Gosvami Maharaja went to his Janakupuri Temple in Delhi, for the celebration of the anniversary of the installation of the Deities – Sri Sri Radha-Ramanavihari – and also the temple’s annual parade with sankirtana. After a few days in Delhi, he traveled to Navadvipa to check on the construction work of the magnificent temple, Sri Kesavaji Gaudiya Matha, and from Navadvipa he went to Bangalore.

Srila Narayana Gosvami Maharaja arrived in Bangalore on Tuesday morning, Dec. 11.  Accompanied by the devotees there, he first went to the farm, to Sri Ranganatha Gaudiya Math, where he rested for 5 days – giving darsana and working on his books.

Then, on Sunday evening, he went to Bangalore City and spoke at a large Hanuman temple before a crowd of about 600 people. He began his speech with a discussion of Srimad-Bhagavatam and its deep meaning, and progressed to Brhad-Bhagavatamrta and the different levels of devotees and devotion. He ended by glorifying Srimati Radharani as the topmost devotee of Vrajendra-nandana Sri Krsna.

He also spoke to correct those under the misconception of the ritvik philosophy, saying that it has no connection with our sampradaya and was never advocated by Srila A.C. Bhaktivedanta Swami Prabhupada. 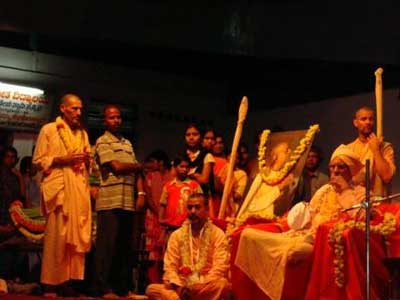 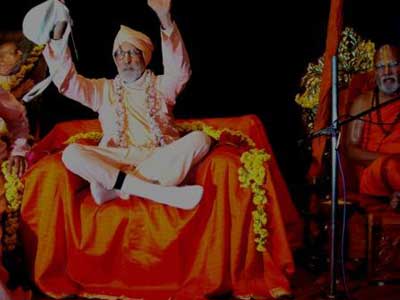 While in the city, Srila Narayana Maharaja gave two darsanas. About 70 people came forward for harinama initiation, many after hearing him speak on Sunday evening. The devotees in Bangalore had the chance for very close association and all are extremely happy now, already planning for Srila Maharaja’s next visit. 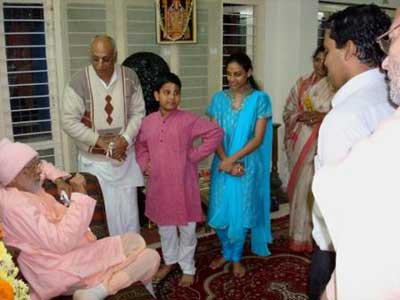 On December 14, Srila Maharaja flew from Bangalore to Malaysia. There he is staying on the island of Penang, at the home of Dr. Paramananda dasa and Malati dasi, to write his Hindi translation of Srila Visvanatha Cakravarti Thakura’s commentary on the Tenth Canto of Srimad-Bhagavatam. He will be going to New Zealand on January 1, 2008, for a one-week hari-katha festival there. 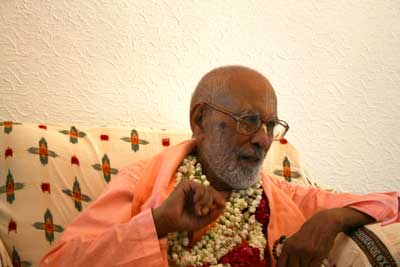 A summary of a few days of the auspicious Govardhana Kartika parikrama:

The 2007 Vraja Mandala Parikrama party of over 1,000 devotees moved from Vrndavana to Sri Sri Giridhari Gaudiya Matha in Govardhana on November 7th and stayed there until the end of Kartik on November 24th. There, Srila Bhaktivedanta Narayana Gosvami Maharaja took the party of international pilgrims to perform parikrama of Giriraja Govardhana, Radha-kunda, Manasi-ganga, Varsana, and numerous other holy places of Sri Sri Radha-Krsna’s pastimes such as Sanket, Uddhava-kyari, Nandagaon, and Yavat.

Srila Bhaktivedanta Narayana Maharaja spoke every morning and evening at the Giriraja Gaudiya Matha. In the mornings he spoke from the book Sri Bhajana-rahasya, and in the evenings he spoke about the holy places the parikrama party went to that day, as well as the last chapter in Sri Brhad-Bhagavatamrta, known as bhakti-rasayana (the nectar-tonic of pure devotion). 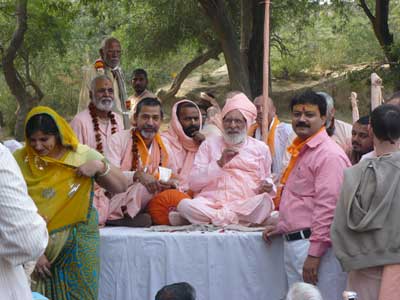 Srila Maharaja with Dr. Sanjaya and others at Surabhi-kunda.

On Nov. 8, the parikrama party went to Surabhi-kunda, where they read from Srila Narayana Maharaja’s Vraja Mandala Parikrama book: "This kunda, which is filled with clean, sweet water, lies on the right-hand side of the parikrama path, somewhat further along from Raghava Pandita’s cave. On Indra’s request, the desire cow Surabhiji performed abhiseka of Sri Govindaji at Govinda Kunda with the milk from her udder. Later, out of greed to have darsana of Sri Krisna’s cowherding lila and especially of Sri Radha-Krsna’s secret nikunja-lilas, Surabhiji resided at this place for the duration of Sri Krsna’s manifest Vraja-lila. Sri Krsna’s great-grandson, Maharaja Vajranabha, built this Surabhi-kunda in her memory. By taking bath and performing acamana here, all one’s sins, aparadhas and anarthas are dispelled, and one obtains vraja-prema."

Srila Narayana Maharaja chose only a few holy places at which to physically accompany the devotees, and Surabhi-kunda was one of those places. There he sat with all the devotees and told them:

"We commit many offenses in our devotional service, and therefore we are faced with many obstacles in our devotional advancement. Just by taking bath in this Surabhi-kunda, all of one’s offenses and obstacles in devotion are destroyed.  Therefore, Surabhi-kunda is a very important and famous place.
"Three or four years ago, Surabhi-kunda was like a mud-hole. At that time Dr. Sanjaya arranged for its reconstruction, and now the water here is very deep and pure. I am giving special blessings to Dr. Sanjaya and his family, that they will be happy in this life and the next life. They have also arranged very nice and special prasadam, so everyone should now sit in rows, and the brahmacaris and sannyasis will distribute it to you." 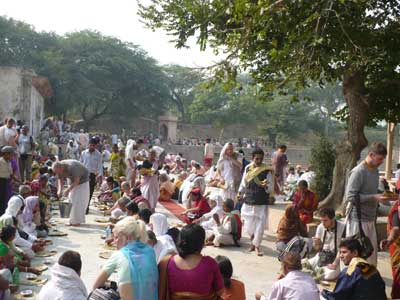 On the way to Radha-kunda, the parikrama party stopped at Sri Uddhava-kunda:

"Uddhavaji always resides here as grass and shrubs in order to be sprinkled by the foot-dust of the gopis. After the disappearance of Sri Krsna, His queens in Dvaraka were greatly afflicted by sorrow. Once, Krsna’s great-grandson Vajranabha came here with them, and they performed a very loud sankirtana. In that maha-sankirtana many associates of Krsna started to appear, one by one. The associates of Dvaraka all began to sing kirtana and dance in the sankirtana mandala (the circle in which sankirtana is performed), and Arjuna began to dance and play mrdanga. Suddenly, the maha-bhagavata Uddhava emerged from the grass and shrubs, and he also became immersed in dancing. How could Krsna now remain behind when this maha-sankirtana was taking place? In that maha-sankirtana rasa, Krsna finally also appeared along with Srimati Radhika and the other sakhis and, after some time, disappeared again. Uddhava thus pacifi ed the queens at this place. Pilgrims performing parikrama of Sri Govardhana proceed along the parikrama path until they arrive at Sri Radha Kunda." (Sri Vraja-mandala parikrama) 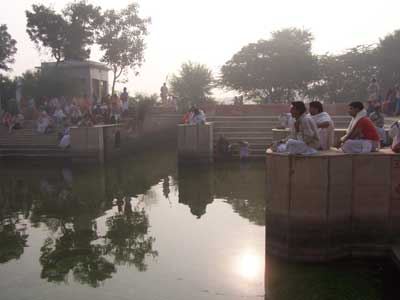 Srila Maharaja joined the party at Radha-kunda, and spoke just next to Sri Raghunatha dasa Gosvami’s samadhi. There he told all the international pilgrims:

"We have come to the topmost worshipful place of the Gaudiya Vaisnavas, Sri Radha kunda and the bhajana and samadhi place of Srila Raghunatha dasa Gosvami. After the disappearance of the main associates of Sri Caitanya Mahaprabhu, like Sri Svarupa Damodara, Sri Raya Ramananda, and Sri Nityananda Prabhu, Srila Raghunatha dasa Gosvami could not remain in Jagannatha Puri because that place was like a fire (of separation) for him.

"Being unable to tolerate Puri, he decided, 'I will go to Vrndavana and end my life by jumping off the top of Govardhana or drowning in the Yamuna.' When he came to Vrndavana, he had the good fortune of meeting Srila Rupa Gosvami and Srila Sanatana Gosvami. They pacified him and gave him a new life.

"Upon the disappearance of Srila Rupa Gosvami, he lamented, ‘Alas, this Vrndavana used to give me so much happiness, but now Radha-kunda appears like the mouth of a tigress and Giriraja is like a python, ready to take my life.’ He felt such separation from his Gurudeva. His place of bhajana is here, and his samadhi is just behind it.

The devotees also read from Srila Maharaja’s Vraja Mandala Parikrama book wherein it is stated: "When Sri Caitanya Mahaprabhu came to this place, He inquired from the local people about Radha kunda and Syama kunda, but they could provide Him with no information. Instead, they told Him about the two fields named Kali Khet and Gauri Khet that lay before them, which contained a little water. Mahaprabhu respectfully addressed Kali Khet as Syama kunda and Gauri Khet as Radha kunda and offered them His obeisances. Then, as He bathed in them, He became overwhelmed. Losing all patience, He cried out, “Oh Radhe! Oh Krsna!” and fainted. The place where He sat down is now called Tamala Tala. It is also called Mahaprabhu’s baithaka (sitting-place)." 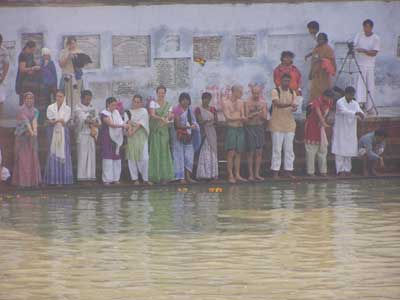 Devotees praying on the bank of Sri Radha-kunda

Reporters: Vasanti dasi and the devotees of Bangalore