Under the guidance of Srila Bhaktivedanta Narayana Gosvami Maharaja, the March 15 – 21 Sri Navadvipa Dhama parikrama was a great success. Over 15,000 pilgrims were gathered at Sri Kesavaji Gaudiya Matha in Koladvipa and all the activities of the parikrama went on smoothly. Even the distribution of 15,000 plates of Sri Krsna prasadam, two or three times a day, went on smoothly – having been arranged by Sri Caitanya Mahaprabhu’s own mother and wife, Srimati Saci devi and Srimati Visnu-priya devi.

The pilgrims visited the prominent holy places in Navadvipa during the daylight hours of the six-day parikrama, and in the evenings they heard the discourses of Srila Narayana Gosvami Maharaja and his followers. Srila Narayana Maharaja would speak for a few minutes about the places visited that day, and then he would call on sannyasis and other speakers to discuss the glories of Sri Caitanya Mahaprabhu and His teachings. 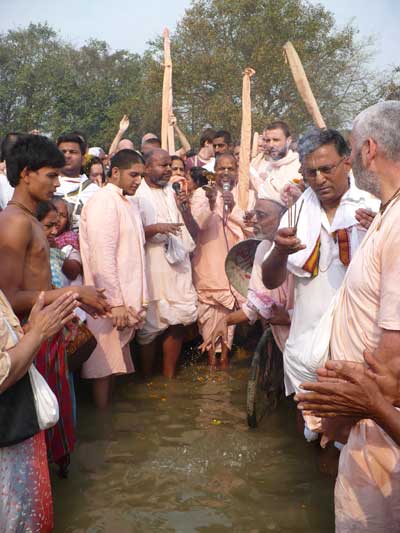 Taking a vow (sankalpa) at the Ganges River on March 15, on the first morning of parikrama. 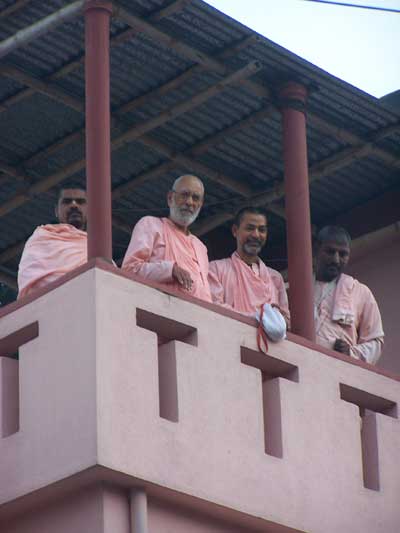 At the beginning of each day’s parikrama, Srila Maharaja stood on the roof of his quarters, watching the pilgrims and giving them his abundant blessings. 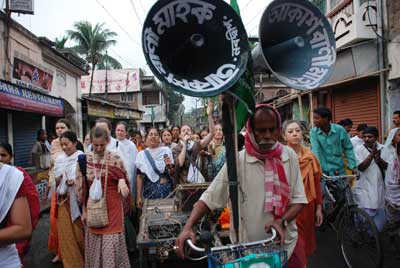 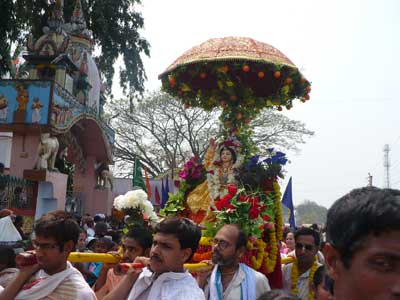 At the head of the entire parikrama party was the Supreme Personality of Godhead, Sri Caitanya Mahaprabhu, carried on a palanquin by His servitors. 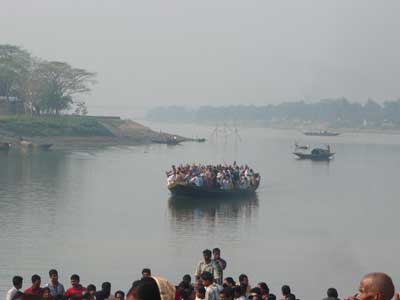 Crossing the Ganga River to Mayapura on March 16, the pilgrims accompanied Sri Caitanya Mahaprabhu to Yogapitha, the Lord’s own birthplace. 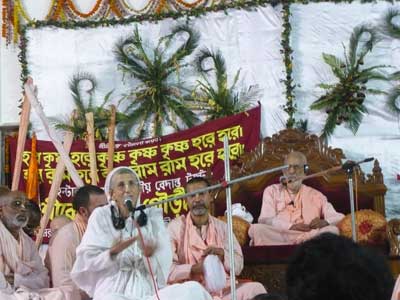 Srila Maharaja called on various speakers each evening, to glorify Sri Caitanya Mahaprabhu, to discuss the reasons for His appearance, and to explain His unique contribution to the world. 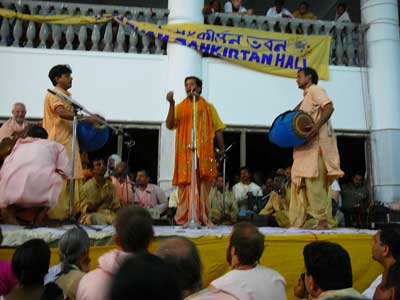 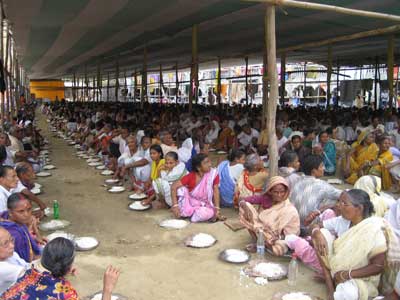 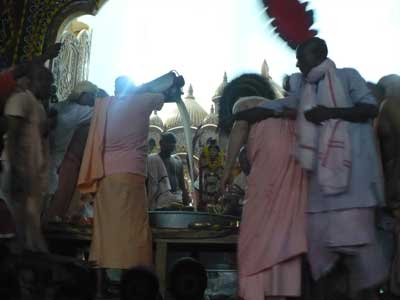 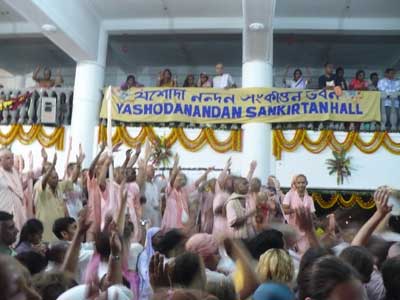 On March 22, the day following Gaura-purnima, Srila Narayana Maharaja performed a sannyasa initiation ceremony in the temple room of Koladvipa’s Sri Kesavaji Gaudiya Math, and this was his ninth annual sannyasa ceremony. This year and in previous years, he explained that there are two types of sannyasa initiations. The first is the formal initiation of those elevated devotees who were already sannyasa by qualification, and the second is a formal initiation for giving a chance for advancement to those who are not yet qualified. Srila Maharaja also explained that there are two qualifications for sannyasis, and these are described in the following verses. The first is:

"One who can control the forces of speech, mind, anger, belly, tongue and genitals is known as a gosvami and is competent to accept disciples all over the world.” (Nectar of Instruction Verse 1) 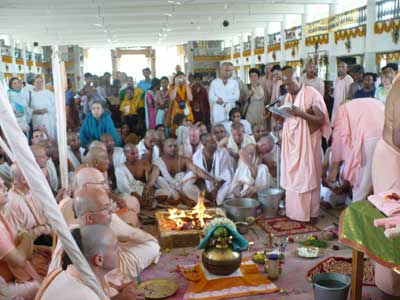 The following is a transcription of Srila Narayana Gosvami Maharaja’s short speech at this year’s ceremony:

“Those who are going to take sannyasa should be triguna vijaya. This means they should act in such a way that they will be victorious over the contamination of the three material modes of material nature, namely material goodness, passion, and ignorance. They should be free from lust, anger, greed, illusion, the madness of false pride, and envy (kama, krodha, lobha, moha, mada, and matsarya).

“Not only that, you should be very strong in Krsna consciousness, krsna-bhakti, especially because I have given you the gopi-bhava mantra. Always remember this. Try to forget your worldly name and all worldly designations, such as ‘I am so and so sannyasi’.

“Do not have any interactions with your past family members. Do not go to your native place for at least 12 years. If you are strong after those 12 years, then you can go there. The sannyasa kaupin is Pritivi devi (the goddess of the Earth planet) and the dor (sannyasa under-garment) is Anantadeva, Sesayi Sankarsana. This is given to you so that they will protect you.

“Don’t have any false ego.

“Don’t have any relations with bad persons or sense enjoyers. Try to be merciful to them, but be careful. If you eat their grains or any foodstuffs prepared or offered by them, your heart will be polluted. Don’t have friendship with any sense enjoyers, mayavadis, or those attached to the opposite sex.

“Do not have any temptation to keep money. If any money is received, at once give it to Gurudeva. He will immediately use it in whatever way he thinks best.”

Srila Narayana Maharaja then asked who is senior (according to the date of their diksa initiation) amongst the three sannyasi candidates: Bhagavata dasa, Jayanta-krsna dasa, and Janardana dasa. He then called on them to stand up, one by one, according to seniority. He first called Sripad Bhagavat dasa vanacari, a senior disciple of Srila Prabhupada Bhaktivedanta Swami Maharaja, and said: 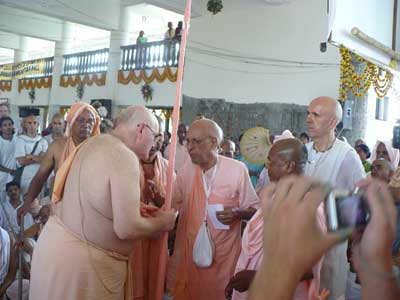 “His name was Bhagavat dasa. I am giving him the name Sri Sriman Bhaktivedanta Bhagavata Maharaja.

Srila Narayana Maharaja then requested Sripad Bhagavat Maharaja to be seated, and he called on Sripad Jayanta-krsna dasa, from France, to stand up:

Srila Narayana Gosvami Maharaja then called on Sripad Janardana dasa, from Venezuela, to stand up:

Srila Narayana Maharaja had given them each their new sannyasa garments and danda at the time of calling them to stand, and now he requested them to change into their new clothes. He requested Sripad Damodara Maharaja to assist them. 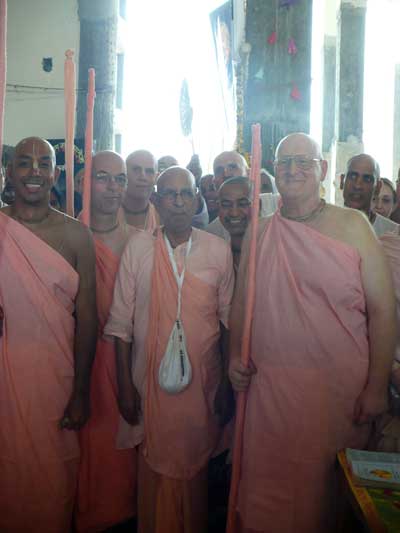