Srila Narayana Gosvami Maharaja and his party flew from Hong Kong to Vancouver, Canada on April 16th, where they stayed with the family of Sriman Hemant dasa and Mansi dasi. On the evening of April 17th, he gave a short darsana at the home of his disciples Sriman Raghubir dasa and Radha-priya dasi. 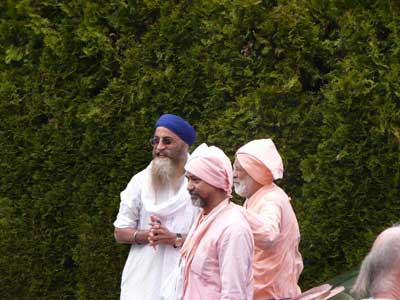 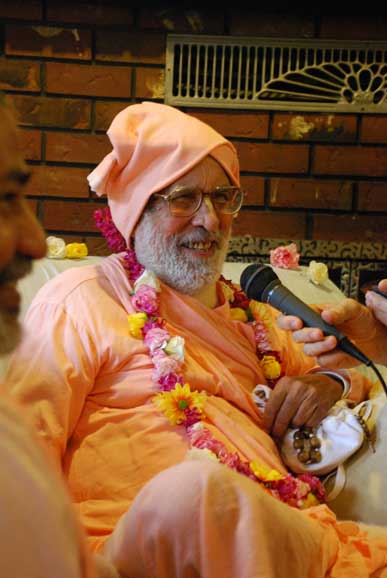 He told the many devotees present:

“Do you know why I have come from so far away – from India? I have come to remind you that you are refugees here in the material world, because you have forgotten Krsna. Sri Krsna has mercifully given you this human form of life only for you to remember Him and to perform devotional service – nothing else.

“You should always remember this. Death is ‘on our head’; death is at the bottom, and it on this side and that side – waiting. We will become old very soon; you must become old. The doctors and scientists cannot save you from this, for they themselves must become old.

“One day you will have to give up this world, and you will not be able to take a single farthing with you. Always remember this. Your mother, father, sons, friends, husband, and anyone else cannot go with you. What you are doing is like the donkey’s activities – laboring all day for nothing.

“Time is very short; very short. No one knows when death will come. Children may die even before old persons. Nothing is certain.

“Do not endeavor for anything other than pure devotional service. Go on chanting; everything for your maintenance will come automatically – this is certain. So always chant and remember Krsna, and thus be happy forever.

“This is the essence of our entire Indian Vedic culture, as explained in Srimad-Bhagavatam and Bhagavad-gita. You can never be happy without performing devotional service. If you want to be happy, chant and serve Krsna. Then you will happily return to your original place, Goloka Vrndavana – back to home, back to Godhead.”

A devotee then asked, “Will we know you there?”

Srila Narayana Gosvami Maharaja replied, “I will keep a place for you.” 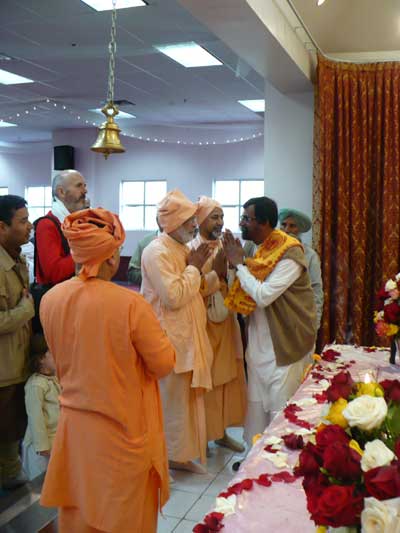 Greeted by the pujari and other staff at the Hindu Mandir 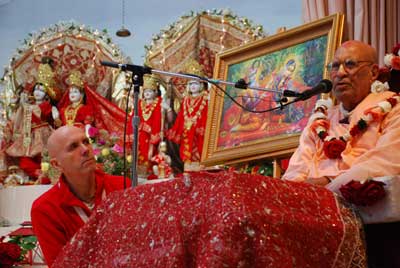 On the first evening Srila Narayana Maharaja spoke in Hindi, and Sripad Ramacandra dasa translated his lecture into English. Srila Maharaja spoke from the first canto of Srimad-Bhagavatam, wherein the sages gathered in Naimisaranya and enquired from the great saint Sri Suta Gosvami about how the soul can be happy. He also clarified and elucidated the meaning of pure bhakti. 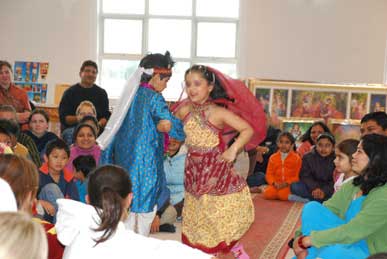 Dance performance by the children during the temple program

At the second evening program, Srila Maharaja spoke about the conversation between Sri Caitayana Mahaprabhu and Sri Raya Ramananda regarding the ultimate goal of life and the process to attain it. During that discourse he explained:

“When Krsna felt neglected by His mother, He became angry and broke the pot of yoghurt. Mother Yasoda caught Him, chastised Him, and wanted to bind Him. She took all the ropes in her house, even those that were used for tying the cows in order to bind His waist, but all these ropes tied together were always two fingers too short. Although the combined ropes – two, three, four, five, six, and more – were extremely long, they could not bind Krsna’s waist. His waist was only twelve fingers long, but still it could not be bound.

“What do the two fingers represent? One is the devotee’s effort and the other is the mercy of Krsna. Without seeing our endeavor, Krsna’s mercy will not come. When we will do bhajana like Srila Raghunatha dasa Gosvami, Srila Rupa Gosvami, Srila Narottama dasa Thakura, or Srila Gaurakisora dasa Babaji Maharaja, who gave up sleeping and always chanted the holy name, Krsna will see this and bestow mercy.

[“I worship the Six Gosvamis, who passed all their time in chanting the holy names, singing songs, and offering dandavat-pranama, thereby humbly fulfilling their vow to complete a fixed number daily. In this way they utilized their valuable lives and conquered over eating and sleeping. Always seeing themselves as completely worthless, they became enchanted in divine rapture by remembering Sri Radha-Krsna’s sweet qualities.” (Sri Sad-Gosvamyastakam, verse 6)]

“The Six Gosvamis were not even sleeping, always weeping, and chanting day and night. If you chant in this way, then you will be able to have the darsana of Krsna and serve Him; otherwise not. We should try to do this. Then Krsna’s mercy will come and we will become perfect.

“Raya Ramananda said, ‘The bhakti of the gopis is highest. The gopis have left their husbands, children, mother, father, wealth, house, and everything else for Krsna. They serve Krsna in all respects, to please Him. Krsna tells them, “Oh gopis, I cannot repay you. You have left everything, but I cannot give up anything – neither my father, mother, friends, or devotees. How can I give up those who are worshipping Me? You are really sadhus. Therefore, be satisfied with your own qualities and sweet services. I will always be indebted to you.’

“Ramananda Raya continued, ‘Of these gopis, Srimati Radhika has the highest love and affection for Krsna. No one can be compared with Her – not Lalita, Visakha, or Candravali.’

“Raya Ramananda, who is Visakha-sakhi in Krsna’s pastimes, told Mahaprabhu, ‘I never knew anyone who wanted to know more than the love and affection of Srimati Radhika.

“Raya Ramananda continued, ‘I have written this poetry myself.’ *[See endnote 1]

["Alas, before We met there was an initial attachment between Us brought about by an exchange of glances. In this way attachment evolved. That attachment has gradually grown, and there is no limit to it. Now that attachment has become a natural sequence between Ourselves. It is not that it is due to Krsna, the enjoyer, nor is it due to Me, for I am the enjoyed. It is not like that. This attachment was made possible by mutual meeting. This mutual exchange of attraction is known as manobhava, or Cupid. Krsna's mind and My mind have merged together. Now, during this time of separation, it is very difficult to explain these loving affairs. My dear friend, though Krsna might have forgotten all these things, you can understand and bring this message to Him. But during Our first meeting there was no messenger between Us, nor did I request anyone to see Him. Indeed, Cupid's five arrows were Our via-media. Now, during this separation, that attraction has increased to another ecstatic state. My dear friend, please act as a messenger on My behalf, because if one is in love with a beautiful person, this is the consequence.”] 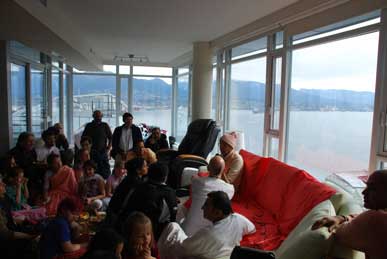 Darsana at the home of Hemant dasa

“ ‘Srimati Radhika said, “There was no messenger needed at the time of Our meeting. I saw You and You saw Me; our four eyes met. Although there was no room for our unlimited love to grow further, it grew unlimitedly. But now You have gone to Mathura and Dvaraka. Where is that messenger? I feel separation; I want to meet You.”

“Mahaprabhu said, ‘Don’t say more; otherwise, I will return to the mood of being Sri Krsna.’”

[To see the video of this discourse, please logon to www.purebhakti.tv.]

After completing his stay in Vancouver, on April 21st Srila Maharaja traveled to Toronto for a four-day visit. 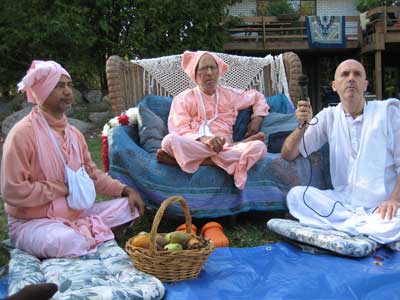 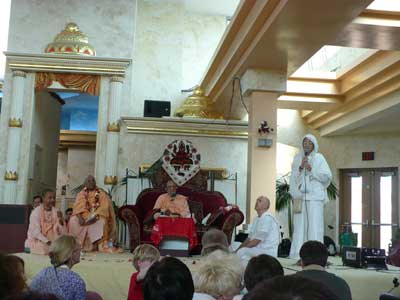 Program at the Hindu temple in Toronto 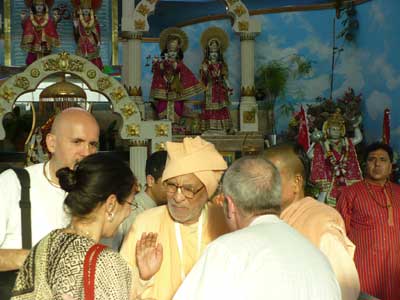 Offering blessings before leaving the temple 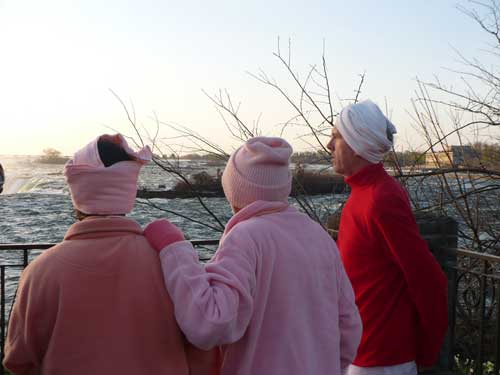 Looking over Niagara Falls during a morning walk 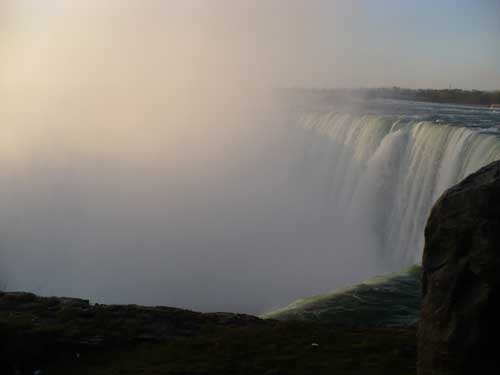 The living entities in the land, sea, and sky of Niagra Falls getting purified by the glance of the pure devotee, and by the atoms of prema emanating from the pores of his divine body. *[See endnote 2]

[*Endnote 1: “These verses were originally composed and sung by Ramananda Raya himself. Srila Bhaktivinoda Thakura suggests that during the time of conjugal enjoyment, the attachment might be compared to Cupid himself. However, during the period of separation, Cupid becomes a messenger of highly elevated love. This is called prema-vilasa-vivarta. When there is separation, conjugal enjoyment itself acts like a messenger, and that messenger was addressed by Srimati Radharani as a friend. The essence of this transaction is that transcendental loving affairs are as relishable during separation as during conjugal enjoyment. When Srimati Radharani was fully absorbed in love of Krsna, She mistook a black tamala tree for Krsna and embraced it. Such a mistake is called prema-vilasa-vivarta. (Sri Caitanya-caritamrta, Madhya-lila 8.194, purport by Srila Bhaktivedanta Svami Prabhupada)]

[*Endnote 2: “Gangara parasa hoile pascate pavana / dasane pavitra kore ei tomara guna – O venerable Vaisnava, after touching the Ganga one becomes purified, but your quality is such that just the sight of you purifies one of his sins. (Ei-baro Koruna Koro, by Srila Narottama dasa Thakura)]