Srila Bhaktivedanta Narayana Gosvami Maharaja left Turkey after his successful programs there, and he arrived in Odessa, Ukraine on September 18th. From the airport he traveled to the festival site in Zatoka, located on the Black Sea, where 600 devotees from different parts of Russia, as well as several devotees from Poland, Germany, Ireland, and America, had come to attend the festival. 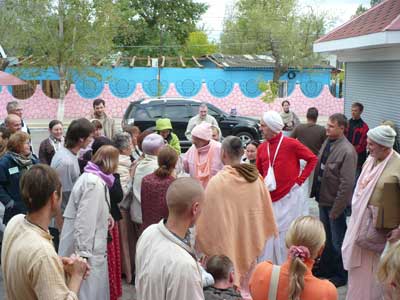 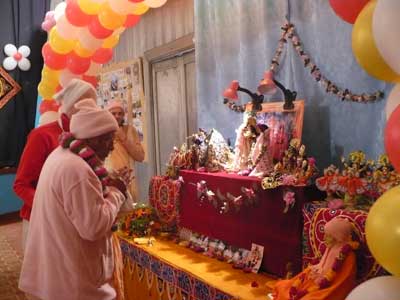 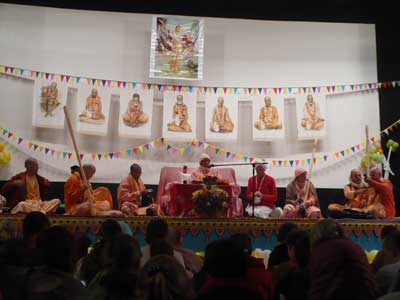 During the first part of each of his nightly classes, Srila Bhaktivedanta Narayana Gosvami Maharaja spoke from Srila Jagadananda Pandita's book, Sri Prema-vivarta. Then, during the second part of his classes, he called on other speakers to speak on various histories and teachings from Srimad-Bhagavatam.

"I think our festival will be successful...We will try our utmost to deliver harikatha - Sri Krsna's sweet pastimes and Sri Caitanya Mahaprabhu's sweet pastimes - which you should carefully place in your pockets, in your hearts, and then take with you to your homes. I will give classes about the very prominent associate of Sri Caitanya Mahaprabhu, Srila Jagadananda Prabhu. He has explained the process by which we can enter into prema-bhakti, and his instructions are very, very useful for the success of our spiritual life. If we follow his instructions, we will be able to realize what is prema, or divine love; and without his instructions, we cannot do so... [Srila Narayana Maharaja then discussed the same topics that he had previously talked about in Badger and Italy two months earlier, and which was recently sent to our harikatha readers as Prema-vivarta, parts one and two.]

"I want to speak on Prema-vivarta, which is very interesting and favorable for your bhakti. I also want that other speakers discuss Srimad-Bhagavatam, guru-tattva, the life and character of Sri Narada Rsi, the conversation between Sri Narada and Srila Vyasadeva, the conversation between Jada Bharata and King Rahugana, and the histories of Ajamila, Ambarisa Maharaja, Putana Witch, the bewildering of Brahma (Brahma-vimohana-lila), and Sri Krsna's pastimes with the poisonous serpent Kaliya. These are very interesting topics, so the speakers should be prepared for that. First will be guru-tattva (the established philosophical truths about Sri Guru), and then other tattvas...."

["The verdict of all revealed scriptures is that by even a moment's association with a pure devotee, one can attain all success." (Sri Caitanya-caritamrta, Madhya-lila 22.54)

"In this world, sadhu-sanga is very, very rare. We think that we are seeing so many sadhus in this world. But, really, who is a sadhu? Those who say they are a sadhu should ask their hearts, ‘Are you really a sadhu or not? Have you fully given all your attachment to the lotus feet of Gurudeva? Are you obeying Gurudeva?' Ask this, and then see what your heart replies. Such devotion is very rare.

"I saw that my Gurudeva ‘took his life in his hands' for his Gurudeva. He never disobeyed his holy master. If we cannot obey our Gurudeva, then how can we obey Sri Krsna and Sri Caitanya Mahaprabhu?

"Life is very short, and you do not know when it will end. Therefore, before your life is finished, fully surrender everything to the lotus feet of Guru, and through Guru to Krsna. Then, in only 24 minutes, everything about your life can change. Such surrender has been explained in Srimad-Bhagavatam's ninth canto . Such surrender is very rare.

"It does not have to take 24 minutes; it can take even one minute - if you decide, ‘Oh, I am totally surrendered to the lotus feet of Gurudeva. Gurudeva, whatever instruction you give, I will obey. I will never disobey.'" 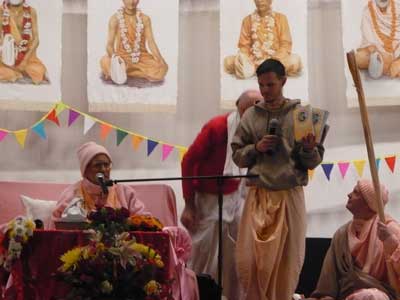 At the end of Srila Maharaja's first evening class, Sriman Rasa-sindhu dasa brahmacari presented to him the Russian translation of his Sri Vraja Mandala Parikrama, as well as a CD with audio Russian translations of the English editions of Sri Upadesamrta, Sri Bhakti-tattva-viveka, and Going Beyond Vaikuntha.

Very pleased, Srila Maharaja then announced, "I am very happy that my books are being translated in to the Russian language. I want that all my books - more than one-hundred books - should be very soon translated into Russian, and also Spanish, Chinese, and all other languages; and they should be distributed...I want that my Sri Jaiva-Dharma, Sri Bhagavad-gita, Sri Bhajana-Rahasya, and so many other books should come out very soon; not only in Russian, but in Spanish and all other languages." 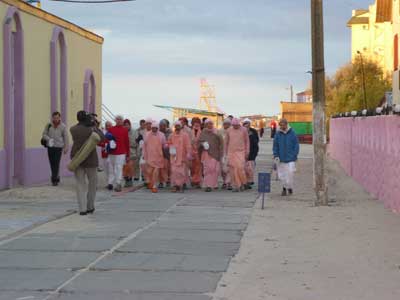 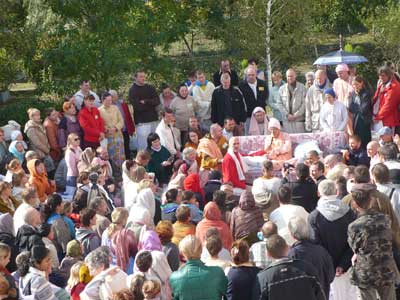 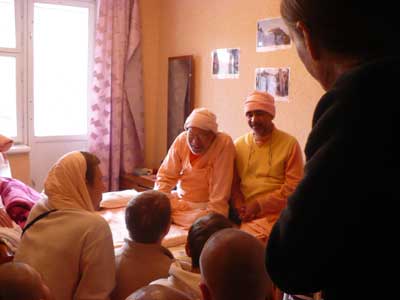 The following is an excerpt of Srila Maharaja's Sri Prema-vivarta lecture, given on the second evening of the festival. After describing some beautiful pastimes of the transcendental loving quarrels between Srila Jagadananda Pandita and Sri Caitanya Mahaprabhu, he said, "Jagadananda Pandita writes, ‘Our prema was renewed, in the same manner as when there is any problem in Vraja wherein Sri Krsna survives a great danger. At that time the prema of the Vrajavasis becomes renewed.' Srila Jagadananda Pandita's prema becomes similarly renewed when he exhibits maan (a sulky mood in transcendental loving anger). If gold is purified by fire, it becomes very glittery. In the same way, by maan, the glitter, or splendor, of prema is increased.

"Sri Caitanya Mahaprabhu said to Jagadananda Pandita, ‘That is why you do maan, and why I also sometimes do maan; only to renew our prema.'

"You should know that Srimati Radhika and Sri Krsna's prema is renewed by Radhika's maan. By Her maan, Krsna's happiness increases.

"Krsna once told Radhika, ‘I want to learn maan from you.'

"Srimati Radhika asked, ‘Do You really want to learn?'

"Srimati Radhika said, ‘All right, then think, "I have done maan." And, if I say anything to You, You should turn your face away and put up Your hand as if to say, "No, I will not..."

"Radhika then wanted to talk with Krsna; but Krsna was doing maan, so He wasn't laughing, joking, or giving any other type of response for a long time; He simply turned His face away.

"Srimati Radhika finally laughed and said, ‘I taught you maan, and now you are doing maan with Me.'

Srila Maharaja held two initiation ceremonies while in Odessa. One-hundred-five devotees received their harinama and/or diksa initiation in the first ceremony, and sixty-one devotees on the second day. 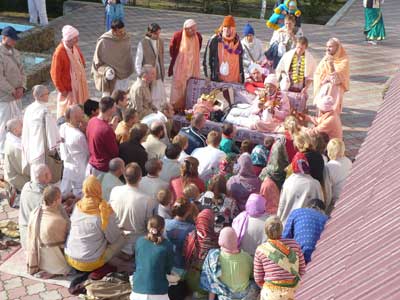 After Srila Maharaja left Odessa and his tearful, separation-wrought followers there, he and his small entourage flew to Turkey again, for a short writing retreat and for holding one public harikatha program. After that he will return to India, where he will participate in the New Delhi Ratha-yatra festival.