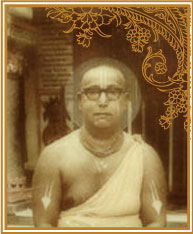 (1) Obtaining the shelter of the lotus feet of a genuine guru is, without a doubt, a matter of both great fortune and great dilemma for the baddha-jiva. If, however, a fortunate soul has a sincere longing and ardency to attain a true guru, he does so by the mercy of Sri Krishna.

(2) The baddha-jiva is extremely insignificant; it is impossible for him to realise the magnitude of Sri Guru.

(3) One who, birth after birth has accumulated bhaktiunmukhi-sukriti, or spiritual merits leading to bhakti, will, in one birth, come face to face with the devotee of Sri Krishna, Sri Guru, by Sri Krishna's mercy. By the mercy of that krishna-bhakta (Sri Gurudeva) one hears krishna-katha from his mouth and gradually experiences the appearance of devotion in one's heart. By the light of the sun, one sees the sun. Similarly, in the light of the sadhu's mercy one can comprehend the sadhu's svarupa (eternal nature), and an acute hankering awakens to engage in hari-bhajana in the shelter of his lotus feet.

(4) The sadhu mercifully gives mantra initiation (diksha) and instructions (siksha) in the path of hari-bhajana to that sincere and surrendered person.

(5) As a result of accepting the shelter of a sadhu's lotus feet, a person performs hari-bhajana, and as he gradually becomes free from anarthas, he becomes cognizant of the nature of the transcendental reality.

(6) Only a sadhu who knows the imports of all sastras, who is devoted to Bhagavan and who is intent on bhajana, is a genuine guru. Those who speak in order to appease the fancies of the baddha-jiva's mind and thus try to attract it are not worthy of the title guru; rather they are the jiva's enemies. Never associate with them no matter how fond of their charming words you may be.

(7) Know that the entirety of instructions given by the karmis, jnanis, yogis and pseudo bhaktas to the jiva so he can obtain his own pleasure contain no message of eternal, supreme auspiciousness. The association of such persons is always to be rejected, no matter how enjoyable it is.

(8) One cannot understand that the association of nondevotees brings utter inauspiciousness until, as a matter of fortune one achieves the pure devotee's mercy, which results from Sri Krishna's grace.

(9) The words of pure devotees are contrary to our sense gratification. No matter how pitiless and harsh their words may seem if we can sincerely submit to them with our body, mind and words, our eternal welfare is assured.

(10) Maha-bhagavata Vaishnavas are the eternal, dear associates of Gaura-Krishna. If a jiva has not accumulated an unlimited amount of bhaktiunmukhi-sukriti, the darsana and shelter of such Vaishnavas does not come within the scope of his fortune.

(11) Merely maintaining the arrogance that one has received the mercy of suddha-bhaktas does notactually award that mercy or the position of being their disciple.

(12) A genuine disciple is just as rare as a genuine guru.

(13) Sri Bhagavan, as antaryami, resides in the hearts of all. Since pure devotees are the antaryami of even Bhagavan, they can serve Him according to His internal desires and thus please Him. Thus they are known as bhagavat-preshtha. Even after becoming the genuine disciple of such a person, one must understand the inner desire of Sri Gurudeva and serve him accordingly.

(14) One cannot charm Sri Gurudeva with a display of external emotions, gestures and formalities. If one becomes a disciple without sincerely surrendering oneself at Sri Gurudeva's lotus feet, it is like trying to cheat a blacksmith regarding iron and one is bound to be cheated of his own welfare. (A blacksmith's primary occupation is working with iron.)

(15) Only at the time of Sri Gurudeva's disappearance can one recognise the actual identity of his disciples. One can then understand who has approached Sri Guru with what intention.

(16) Even after taking shelter of a sad-guru's lotus feet, some disciples secretly strive to occupy the seat of Sri Gurudeva at the time of his disappearance. Their acceptance of the shelter of Sri Guru's feet was merely deceit. They are, in fact, hostile and inimical to guru.

(17) Moreover, some disciples try to misappropriate the opulence and paraphernalia intended for the service of Sri Guru-Gauranga. This is not understood while Sri Gurudeva is still present, but after he has disappeared from this world, it assumes a terrible form. Know these disciples to be hypocrites, enjoyers and offenders.

(18) Even at the time of Sri Gurudeva's manifest presence, some try to control their godbrothers instead of regarding them as worshipable. Thus they become severe offenders of the Vaishnavas.

(19) Those who have been appointed to the position of temple-manager, but who do not serve in mutual cooperation with others and are reluctant to give due respect to their godbrothers, are sense enjoyers, that is, enjoyers of the matha. Instead of serving Bhagavan they are greedy to enjoy His property. They are a disgrace to the title "disciple".

(20) Many, who are disciples in name only, even try to destroy the institution when Sri Gurudeva disappears because the honour they receive decreases at that time. These people are most inimical to guru and most certainly condemned to hell.

(21) Those disciples who deviate and engage in numerous acts of malice against Sri Guru when he disappears were undoubtedly hidden deceivers at the time of his manifest presence.

(22) Those in the stage of sadhana, who are not careful about obeying Sri Guru and avoiding offences to Vaishnavas, fall down even though they may have reached an elevated level.

(23) Those who take shelter at the lotus feet of a sadguru with a desire to do hari-bhajana should simple-heartedly follow Sri Gurudeva's instructions with their body, mind and words. If they fail to drive extraneous desires from their hearts, the prohibited endeavours for karma and jnana will present numerous deterrents to remaining on the path of suddha-bhakti.

(26) A disciple surrendered at the lotus feet of a sad-guru should always keep in mind the teachings from "Sri Rupa-siksha" in Sri Caitanya-caritamrita. In this way he should serve Sri Guru without duplicity, and with utmost caution he should cultivate the limbs of sravana and kirtana of sri hari-katha.

(27) If the sadhaka's life lacks simplicity and caution, he will achieve the opposite of his cherished ideal.

(28) Among all the jivas who are wandering throughout the universe, one who has accrued spiritual merit over many lifetimes obtains the seed of the creeper of bhakti, or sraddha. This takes place when the jiva, by Krishna's mercy, is favoured by His dear associates. Endowed with that sraddha, the disciple as a gardener, plants that seed in his heart. He waters it by hearing and chanting the instructions flowing from the mouth of SriGurudeva. Thus by these activities, the creeper sprouts and gradually climbs to the lotus feet of Sri Krishna.

(29) That creeper of bhakti passes beyond this universe, and beyond the Viraja River, Brahma-loka and Paravyoma, the spiritual sky, and goes to Goloka Vrindavana where it climbs the kalpa-vriksha (wishfulfilling tree) of Sri Krishna's lotus feet. The gardener, still in this world, continues to irrigate the creeper with the water of sravana and kirtana and thus welcomes the fortune of tasting the fruit of prema.

(30) If, in the stage of sadhana, innumerable weeds, such as the desire for enjoyment, liberation, material gain, worship and fame grow, as well as the tendency to engage in prohibited behaviour cheating, violence, and so forth - then the main plant cannot grow. At the time of watering it, the sadhaka will first cautiously cut the weeds so that they don't grow.

(31) One fault can arise that is most detrimental to the bhakti-sadhaka. It is known as vaishnava-aparadha and it can either uproot or cut the creeper of devotion like a mad elephant uproots a plant. As a result, the creeper of devotion immediately dries up. Therefore, the sadhaka is to remain diligent to ensure this does not happen. If gurva-avajna (disobeying guru) and vaishnava-aparadha occur, all one's sadhana-bhajana is destroyed.

(32) I have instructed those who have taken shelter of me to always remain cautious in this regard.I have tried to the best of my ability to repeat the instructions of Sri SriMahaprabhu, His associates and our Sri Guru-varga. Nevertheless, those who remain inattentive and consequently not cautious about committing offences to great personalities or about uprooting the weeds cannot be helped. After I leave this body, none of you [my followers] should commit offences and thus act to cause even slight damage to the institution. If all of you cannot cooperate to perform hari-bhajana together according to my instructions, it is better that you either enter household life or move to a place of pilgrimage and perform hari-bhajana.