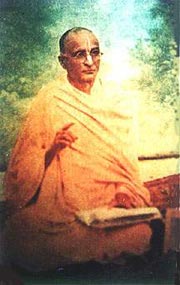 Srila Sarasvati Thakura knew that he would soon be going to his Master, and therefore he gave some final instructions to his disciples. Our Guru-Maharaja was there, as were Gosvami Maharaja (a prominent disciple), Kunja Bihari prabhu, Bhakti Vilasa Tirtha Maharaja and others. He told those in attendance, "I am unhappy. I have come for a mission – to give the things that Sri Caitanya Mahaprabhu came to give. He has ordered me to give the teachings of vipralambha (the mood of separation for Radha and Krsna) and gopi-prema. He ordered me to teach the reasons He came to this world, and to share His gifts.

Saying this, his mood changed and his face became reddish. Then he spoke the following verse:

["Obeisances to the direction that faces Sri Vrsabhanu's daughter. When the breeze coming from that direction playfully moves the edge of His garment, Lord Krsna, who cannot be attained by even the kings of the yogis, thinks that His life has now become a great success." (Sri Radha-rasa-suddha-nidhi, text 2)]

Srila Prabhupada Sarasvati Thakura then explained how Krsna is obedient to Srimati Radhika He said, "There is a nice verse by Srila Raghunatha dasa Gosvami:"

["O Radha, who without going anywhere else stays on the couch of amorous pastimes, talking for a long time with Lord Krsna and embracing Him so strongly that Your two forms appear to become one, please, for even a moment, delight my eyes." (Sri Stavavali, Sri Sri Prema-purabhidha-stotra, text 4)]

"Sri Krsna is very obedient to Srimati Radhika. She is always full of pride, because Krsna is Hers. She has madiya-mayi-bhava, which means that She always thinks, "Krsna is Mine." Candravali has the mood of tadiya-bhava: "I am Krsna's." Krsna is controlled by Radhika only, because of Her madiya-bhava.

Srimati Radhika is svadina-bhartrika. This means Sri Krsna is controlled by Her. Svadina bhartrika is of two kinds: maitri and sakhya. Madiya and tadiya are two parts of madhurya-rasa or paramour love, and they are each divided into two parts: maitri-mood and sakhya-mood. When love is slackened by sincerely requesting something, as in a prayer, that is called maitri. When priti (love) becomes prominent and prayer becomes secondary, that type of svadina-bhartrika is called sakhya. Candravali becomes svadina-bhartrika with maitri as the prominent mood (bhava), whereas Radhika becomes svadina-bhartrika with sakhya-bhava. At that time, Srimati Radhika can order anything She likes from Krsna, and He will carry out those orders – He will do so even if He gets a hint of an order. He will always be ready to carry out an order, even if there is only a hint of it. Regarding Candravali's order however, He will only carry out Her prominent orders; she must tell Him what she wants. In this way, Radhika is most prominent among all the gopis."

Srila Prabhupada Bhaktisiddhanta Sarasvati Thakura was ordered by Sri Caitanya Mahaprabhu to help all devotees understand that Srimati Radhika is the most powerful among all the gopis, and that in order to become Her dasi (maidservant), we will have to become rupanuga. Without being rupanuga – without the guidance of Sri Rupa-manjari – we cannot serve Radhika.

Sri Krsna's priya-narma sakhas (His most intimate of cowherd friends) like Subala and Sridama are inclined towards Srimati Radhika. They are pleased when Radhika and Krsna meet. There are also some priya-narma-sakhas who facilitate Candravali's relationship with Krsna, but Prabhupada was greatly inclined to Srimati Radhika, in favor of rupanuga. He was rupanuga. He wanted to distribute this idea of Sri Caitanya Mahaprabhu: we want to be the servant of Sri Rupa-manjari, so that we can serve Sri Sri Radha and Krsna, not Candravali and others.

Srila Sarasvati Thakura's idea was to preach rupanuga-bhakti. Actually it was not to preach it, for rupanuga is not preached. His idea was to inspire devotees for this service to Srimati Radhika. At the end of his manifest stay in this world, however, he told his followers, "I could not do this, so I am unhappy. You should all gather and come under the shelter of asraya-tattva (the principle of the pure devotee – the reservoir of love for Krsna). Who is asraya-tattva? Guru is asraya-tattva. Living in such shelter, you should serve the Divine Couple Sri Sri Radha and Krsna under the guidance of Sri Rupa-manjari." This was the root motive for all his activities – to give this to the world.

He continued, "For this I have given great suffering to so many persons. I have snatched their educated and very qualified boys and girls, and brought them in this line. Therefore they became furious with me. Also, a certain group (samaja) in Navadvipa and Vrndavana made a movement against me. They could not understand my ideas, and they became opposed to me. The day will come, however, when they will realize that I have done something good, for society and for the individuals in society. I have done something good for everyone's welfare. Later they will regret that they opposed me. They will repent for this.

"So you should serve Radha and Krsna under the shelter of guru-tattva. Don't quarrel. Don't think you will be happy by collecting worldly possessions. You may be lacking so many things, but accumulating worldly possessions and positions will not make you happy. The fruit of having attained a human body is not the fulfillment of useless material ambitions. Besides these desires, we also have various kinds of diseases and our minds are disturbed with many worries. Leave them all.

"Fix an ultimate goal for your life. Decide where you will have to go and what you will have to do, so that your soul will be happy. Don't go towards material enterprises. One day this mundane body will become old and, poisoned by many diseases, it will then be finished. Yet, at that time, if you have given your body to Krsna for His service, your life will be a success. Offer this very wretched body to Krsna."

"Please try to understand my view. Do not quarrel among yourselves over useless worldly values. Always keep in mind what I have told you."

Then he left this world.

At that time our Guru Maharaja, Srila Bhakti Prajnana Kesava Gosvami Maharaja, was present. Bhakti-vilasa Tirtha Maharaja was also present there, and at that time he had not yet taken sannyasa. He was managing all the affairs in all the Mathas at that time. He proposed that our Prabhupada should be cremated in Calcutta, at the burning ghata (crematorium place) at Karatala. Our Guru-Maharaja opposed this and said, "I request you not to take him. We will take the transcendental body of our Prabhupada to Mayapura, where he used to do his bhajana. And he will continue to do his bhajana, for he is still alive. He will be in samadhi. We will erect a Samadhi-mandira there. Then, living there with his Lord, Sri Caitanya Mahaprabhu, he will guide us forever."

When those who had the idea that Srila Prabhupada's transcendental body should be cremated opposed again, Guru Maharaja became furious. Standing by his divine body, He very boldly said, "You cannot take him to Karatala. I will personally stop whoever is doing so." He then arranged a train from Calcutta, (from where Prabhupada left the world) to Krsna-nagara. Around the first of January, in the morning, several thousand persons went with his transcendental body to Mayapura. Then, in the evening they carried his body to the area where the Samadhi is now situated, and they performed kirtana throughout the night. With the assistance of many young boys, our Guru-maharaja dug that Samadhi. He managed the entire separation festival, just as I did for your Prabhupada Srila Bhaktivedanta Swami Maharaja here in Vrndavana. He anointed the body with fragrant oils and put his Gurudeva in samadhi there.

Srila Prabhupada Bhaktisiddhanta Sarasvati Thakura preached the teachings of Lord Caitanya throughout India in no time. He also sent Bon Maharaja, Tirtha Maharaja and Gosvami Maharaja to the Western countries. Preaching did not advance as he wanted, however. He called for Bon Maharaja to return from England and told him, "We do not want to take anything from the Western countries. We have no need to take anything from them. Simply give them what I have told to you – we only want to give the same bhakti-bhava that Caitanya Mahaprabhu has given. Do not follow the habits of the Western civilization of eat, drink and be merry, as Vivekananda did."

He became somewhat apprehensive. Then he sent Gosvami Maharaja, and after that he ordered Srila Bhaktivedanta Swami Maharaja to do it. Srila Swami Maharaja then performed a miracle. Prabhupada Bhaktisiddhanta Sarasvati Thakura was so pleased to know that he has performed this task, and all of you are completing his task.

May Srila Bhaktisiddhanta Sarasvati Thakura Prabhupada be merciful to all of us today. May he inspire pure bhakti in our hearts, so that we can practice and distribute this to others.