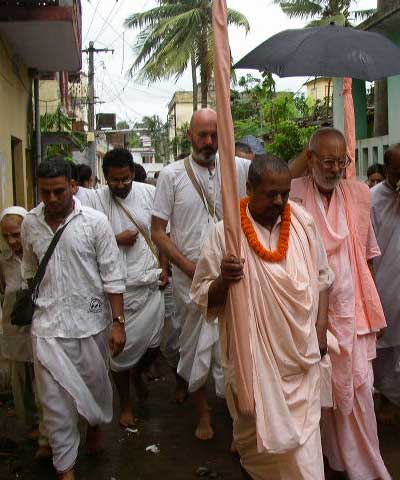 When Sri Caitanya Mahaprabhu lived in the cave at Gambhira, He was always thinking of Krsna and weeping. He came to this world to taste radha-bhava, and His activities while in Gambira comprise a drop of the ocean He experienced. While living in Gambira He gave the deity of Gopinatha to Srila Gadadhara Pandita and told him, "Today I will give you a very good thing. Will you accept it?"

Srila Gadadhara Pandita replied, "Yes, why not? I'll keep it on my head."

In the mood of Radhika, Mahaprabhu began to search here and there in the sand. All of a sudden He touched the mukut (crown) of Gopinatha and told the others, "Take out the sand." He then placed Gopinatha in the lap of Gadadhara Pandita and said, "You should never leave Him."

Srila Gadadhara Pandita built a hut there, and Mahaprabhu used to come daily to take darsana of Gopinatha. Whenever He went to Jagannatha Mandira and saw Subhadra and Baladeva, He did not experience very much pleasure. Rather, in front of Baladeva and His sister Subhadra He felt very shy and thought, "I have come to Kuruksetra." He was in the mood of Srimati Radhika at Kuruksetra where, in great separation, She tried to bring Krsna (Jagannatha) to Vrndavana. In the mood of Srimati Radhika, Mahaprabhu did not like to see Krsna in Kuruksetra, because all His associates, along with all His queens of Dvaraka, were there, and so many horses and elephants were there. There was no chance for Radhika to be with Him in private, and this is why Mahaprabhu always felt intense separation in Puri. In this way, being in Gambhira was like being in Vrndavana and feeling separation for Krsna in Dvaraka.

The mood of separation was always present in Mahaprabhu in Puri. When Radhika went to Kuruksetra, She did not take rest with Krsna. Rather, She was given a separate accommodation in a tent, and Krsna lived with the Yadavas and His queens. When He went to His own accommodation, She felt great separation. 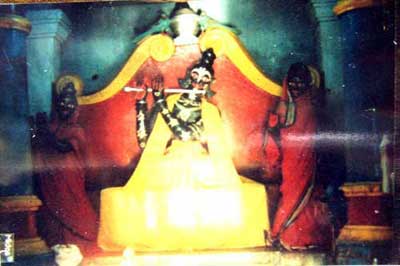 In Puri, Sri Caitanya Mahaprabhu sometimes saw the sea as Yamuna and jumped in it, but there He wept still more, because Krsna would disappear. Sometimes He became like a tortoise, His limbs drawn into His body, and sometimes the joints of His hands and legs would become separated by eight inches, remaining connected only by skin. At that time He sometimes appeared like a ghost. When the devotees would see Him in that condition, they would all become fearful and begin to weep for Him. All this was due to separation from Krsna, and therefore, to get some relief, Mahaprabhu would come to Gopinatha. Seeing Gopinatha, He felt, "Oh, I have come to Vrndavana. My Prananatha (life of My soul) is here." In this way His tears of separation would subside.

On one side of Gopinatha we see Srimati Radhika, on the other side Lalita, and both are black like Krsna. Being in the mood of Radhika, when Mahaprabhu used to see Gopinatha, He (She) became one in mood with Krsna and became black. Radha becomes black by seeing Her Prananatha and becoming absorbed in Him. She sometimes takes the flute of Krsna and begins to play it, and in this way also, She becomes black. This is the mood of Tota Gopinatha with Radhika and Lalita. Then, in the mood of Srimati Radhika, Krsna becomes Mahaprabhu, and Lalita becomes Sri Svarupa Damodara.

There was a bhakta of Sri Caitanya Mahaprabhu named Mamu Thakura who used to render various services to Him. Soon after Mahaprabhu disappeared, Srila Gadadhara Pandita also disappeared, and at that time his disciple Mamu Thakura was appointed by the government of Puri to serve Gopinatha. He was old – about 84 years – and he could not properly offer garlands to Gopinatha. Some say that perhaps because Mamu Thakura could not give garlands to Gopinatha in his old age, Gopinatha sat down for him. Actually, however, Gopinatha sat only for Srimati Radhika. It is a common thing for Srimati Radhika that Krsna stands up and sits down for Her.

Question: Some people say these deities are Lalita and Radhika, and some say they are Lalita and Visakha. Are both opinions correct according to their own moods?

Question: Before coming to Puri, Mahaprabhu knew Svarupa Damodara in His early years in Navadvipa? They were school friends?

Srila Narayana Gosvami Maharaja: Both Svarupa Damodara and Gadadhara Pandita, and also Murari Pandita, were with Him. They all grew up together. Jagadananda Pandita, Mukunda, and Vasu Gosh were also His friends from childhood.

Question: You have said that of the four dhamas of Mahaprabhu, Navadvipa is considered the best. I could not understand what you said.

Srila Naryana Gosvami Maharaja: At first He was in Navadvipa, from childhood up to kisora-lila, reading and writing. When He was 24 years old He left His home and came to Jagannatha Puri, and there He gave mercy to Sarvabhauma Bhattacarya. After that He went to South India, and there He met Raya Ramananda at Godavari. Raya Ramananda saw Him in mahabhava (as Radha) and as Rasika Sekhara (Krsna). He saw Rasaraja Mahabhava, Srimati Radhika and Krsna combined, and he fainted. After that Mahaprabhu returned to Puri and enjoyed the vipralambha-bhava of Srimati Radhika.

Caitanya Mahaprabhu performed His kisora-lila in Navadvipa, and therefore Navadvipa is Vrndavana. Srila Narottama dasa Thakura and others have explained that it is non-different from Vrndavana, but they have not said that Jagannatha-ksetra is Vrndavana. Rather, it represents Dvaraka or Kuruksetra. Those who follow Sri Caitanya Mahaprabhu and do bhajana in Navadvipa will come out in Vrndavana on the bank of the Yamuna at Vamsivat. This has been written and revealed by our acaryas, but they have never said that Jagannatha Puri is Vrndavana. Sri Ksetra means Laksmi Ksetra, where Satyabhama and Rukmini, or Maha Laksmi, reside. If a person leaves his body in Jagannatha Puri, he becomes four-handed, but this is not so in Vrndavana and Navadvipa. There, one will become two handed like the associates of Radha and Krsna. Therefore, Navadvipa is superior to Jagannatha Puri.

Question: And the fourth place?

On the other hand, in the intense separation of divyonmada, Sri Caitanya Mahaprabhu used to see Puri as Kuruksetra and Dvaraka. As far as Godavari is concerned, it is Mahaprabhu's 'school.' He learned from His siksa-guru, Visakha devi, in the school of Srila Raya Ramananda, and after that He returned to Puri. In Puri, He was always absorbed in Vrndavana.

Question: I heard that this part of Puri, Tota Gopinatha, was called Gupta Vrndavana.

Question: Why did Sri Caitanya Mahaprabhu not go to Vrndavana first?

Srila Narayana Gosvami Maharaja: If He had done so, everybody would have known that He is Krsna. There He will always weep and become as mad. He would not be in Radha's mood; He would be in the mood of Krsna. When He would see the cows grazing, the calling peacocks, "Ke ka, ke ka," and the cuckoos calling, "Kuhoo, kuhoo," He will leave that mood of Radhika. He will become Krsna and begin to run everywhere searching for Radha: "O Radhe! Radhe! Radhe!" This is because every leaf, tree, creeper, and everything else in Vrndavana calls, "Radhe, Radhe," He would not able to remain in radha-bhava.

Srila Narayana Gosvami Maharaja: No. I explained that here in Puri there is only lamentation in the mood of separation. I said that the acaryas in our disciplic line are associates of Srimati Radhika – as palya-dasi. We want that Srimati Radhika is always cheerful, and She is cheerful when She is with Krsna. We are pleased when Krsna searches Radhika, when Radhika is hidden in a kunja and Krsna is calling, "Where is Radha? Where is Radha? Where is Radha, Lalita, Visakha and the others?" The gopis are very pleased, thinking, "Oh, today He is searching." They are all in a good mood, and Radhika is so joyful. We should always be pleased in that way.

Here in Puri, Radhika is always calling, "O Krsna! O Krsna! O Krsna!" We don't want that. We select as the best place that place where Krsna will search – in a place like Radha-kunda. Krsna approaches Radhika and serves Her feet, and at that time Radhika is proud and enjoys so much. Here in Puri there is no rasa-lila. Here there is a separation mood; no meeting.

Question: You said one time that this was the most important part of everything He showed.

Srila Narayana Gosvami Maharaja: It is extremely important. For us, at our stage, the mood of separation is more helpful than meeting. But we want that Srimati Radhika should be always pleased. Here She is always weeping and weeping. We don't want to see Radhika constantly weeping.

Question: But it is Krsna who is weeping, isn't it?

Srila Narayana Gosvami Maharaja: But Sri Caitanya Mahaprabhu is in the mood of Radhika. We consider Vrndavana the best place. It is the where Radhika will place Her feet in the lap of Krsna and He will paint His name on them. Krsna will then keep Her feet on His head and heart, and that fresh color will make a stamp-like print on His body. He is always serving Her there; there She says, "Oh, He loves Me best." We want that; but for sadhana, separation is helpful. Without separation we cannot advance an inch further.

Question: Is Jagannatha Puri better for sadhana than Navadvipa?

Srila Maharaja: Navadvipa is better in all ways.

Question: Does Tota Gopinatha give some special benedictions?

Srila Maharaja: Yes, He can give His service. What is the meaning of Gopinatha? Who is Gopinatha?

Srila Narayana Gosvami Maharaja: No, no; it doesn't mean master. Natha means prana – life. Krsna is the gopis' life. But this is not a name. What is His name? If anyone asks you, "Who are you?" you will generally state a relation between you and someone else. Similarly, there is a relation between Krsna and the gopis, and this relation is very high. Therefore, if you go to Gopinatha, He will give you the benediction that you can serve Him as the gopis serve. You will also be able to serve like them. You will realize that it is Gopinatha who gives this benediction. You cannot realize this at present, but when the time comes, you will realize it.