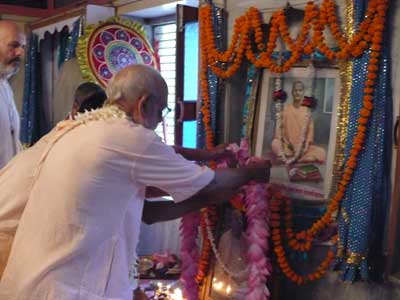 "Sannyasa is taken in order to attain the service of Sri Mukunda. It is not an ordinary thing. The sannyasa mantra is the mantra of the very sacred gopi-bhava. By uttering this mantra we are able to give our entire body, mind, soul and everything we possess to Lord Krsna - to serve Him. Srila Swami Maharaja dedicated himself to his sannyasa-guru, nitya-lila pravista om visnupada astottara-sata Sri Srimad Bhakti Prajnana Kesava Gosvami Maharaja. They were god-brothers and very bosom friends."

Next is an excerpt from a discourse given by Srila Narayana Maharaja in San Francisco on May 31, 1997. This lecture is from a series of classes on Srila Prabhupada's Nectar of Instruction (a translation of Srila Rupa Gosvami's Sri Upadesamrta), Srila Maharaja called on devotees to read from Srila Prabhupada's translations and commentaries, and then he elaborated on Prabhupada's words"

"Who are rupanuga? Those who are actually following the mood of Srila Rupa Gosvami. All our acaryas are rupanuga; they are not only raganuga. This is a very, very important point.

["I worship the lotus feet of Sri Krsna when, due to being thoroughly immersed in separation from Srimati Radhika (who is displaying mana, Her jealous anger), His own dark complexion vanishes and He assumes Her bright, golden luster."]

"You should hear this meaning; otherwise you will miss this rare opportunity.

"When Srimati Radhika disappeared from the rasa dance, Sri Krsna searched throughout the forests for Her. He could not get Her darsana, so He was continuously searching and weeping. At last He sat down at Imli-tala in Vrndavana, near Yamuna in Seva-kunja. He was bitterly weeping and absorbed in thinking, "Oh, where can I find Srimati Radhika? Where can I find Radhika? She has left Me here. Where has She gone?" Drowned in these thoughts, Krsna lost His black complexion and at once became golden. He was still Krsna, but He became golden like Srimati Radhika, and His mood was changed into Hers. At that time He began to cry bitterly, "Oh Krsna, where are You? Oh Krsna, where are You?"

"Do you understand this? He was not calling "Oh Radhika, Oh Radhika," in Krsna's mood. Rather, Her color and mood came in Him and He began to call, "Krsna, Krsna, where are You?"

"In all our Gurudeva's temples and preaching centers he established the Deities, Sri Radha Vinoda-bihari, with this mood: radha-cinta-nivesena yasya kantir vilopita. Krsna's color and mood became covered with Radhika's. That is Caitanya Mahaprabhu.

"Radhalingita-vigraham. I pray to that very form of Krsna, who has been embraced by Radhika with all Her limbs. Sri Krsna's body has been completely covered by all the limbs and parts of Srimati Radhika's body. In this way, radhalingita-vigraha is Sri Caitanya Mahaprabhu.

"This is rupanuga: Krsna should weep; Krsna should search for Radhika. Why should our sweet, innocent, very simple Srimati Radhika go here and there, in mountains, across rivers and through thorny areas? Why should She go? Krsna should go everywhere in search of Her.'

"All rupanuga acaryas think like this, and they have come only to bestow their mercy upon us so that we may enter their mood.

"Srila Bhaktivedanta Swami Maharaja spent much time cutting the jungles of atheism and impersonalism, but he did not come only for this. We can see from his Nectar of Instruction, his broadcasting of Srila Rupa Gosvami's teachings, that he is giving all these truths. Patiently hear about this, and then you will be able to understand the mood of this special rupanuga-vaisnava acarya, Srila Swami Maharaja, *[See endnote 1]

The following is an Excerpt from Srila Narayana Maharaja's conversation in Srila Prabhupada's room at Bhaktivedanta Manor, England, May 17, 1996.

The day was Visvarupa-mahotsava (in September, 1959), and many senior Vaisnavas and disciples of Srila Prabhupada Bhaktisiddhanta Sarasvati Thakura were present at Sri Kesavaji Gaudiya Matha. At that time my Gurudeva gave Srila Swami Maharaja the sannyasa-mantra. Uttering this mantra is not merely a formality. It is chanted to attain the service of the gopis - to enter into the mood of the gopis. He was really a rupanuga-vaisnava.

[*Endnote 1: In the madhurya-rasa, characterized by conjugal love, one can become like Srimati Radharani or Her lady friends such as Lalita and Her serving maids (manjaris) like Rupa and Rati. This is the essence of all instruction in the matter of devotional service." (Nectar of Instruction, verse 8, purport)]