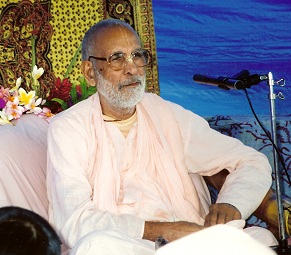 One can attain the path of liberation from material bondage only by rendering service to highly advanced spiritual personalities. These personalities are impersonalists and devotees. Whether one wants to merge into the Lord's existence or wants to associate with the Personality of Godhead, one should render service to the mahatmas. For those who are not interested in such activities, who associate with people fond of women and sex, the path to hell is wide open. The mahatmas are equipoised. They do not see any difference between one living entity and another. They are very peaceful and are fully engaged in devotional service. They are devoid of anger, and they work for the benefit of everyone. They do not behave in any abominable way. Such people are known as mahatmas. Srimad-Bhagavatam 5.5.2]

In recent times, the original explanation of slokas like this have been discarded, and other, different explanations are now given instead. According to the new explanations, those who make them claim that “One should only take shelter of our Gurudeva, or of someone else who comes from our group. One should never go to anyone outside of our group. It doesn’t matter who they are. Even though it may be Krsna in the shape of a sadhu, or even Caitanya Mahaprabhu and Nityananda Prabhu in person, if They are outside of our group, then it is forbidden to see Them. And, if you disobey these rules, then we shall throw you out of the group. You must only see the sadhus who are in our little group.” [*See Endnote 1]

But this is not the meaning of this sloka, or of any other. Such statements are nowhere to be found in sastra.

Bhakti Is Not Confined By Any Sectarian Limitations

I see that so many devotees now want to come and hear Harikatha, but due to their weakness of mind, they become controlled. Those who are trying to control them are acting against Vaisnava etiquette and are committing a great offense. If any person is giving an invitation to come and hear Harikatha, and another person warns people not to go and hear, then he is guilty of the biggest kind of offense. Neither in history, nor in the Srimad-Bhagavatam, the Mahabharata nor the Ramayana, have we ever seen Vaisnavas act like this. So this poison is now being given. You should know that whoever is giving this poison is not even a Vaisnava, what to speak of a qualified guru.

If a so-called guru is giving an order like this, he should most certainly be rejected. We are followers of Krsna-bhakti. If we see a person who is qualified to give us that Krsna-bhakti, then we should hear from them. Bhakti is not confined by any sectarian limitations. Wherever any bona fide Vaisnava is speaking Hari-katha and Srimad-Bhagavatam, we should most certainly go to hear from them. If such a Vaisnava is present, and we do not go to hear from him, then we are guilty of offence. [*See Endnote 2]

So, the explanations of sastra have become different now. Actually, the explanations have not changed, but the mentality of those who try to make them has. So I think that you should not obey these false instructions, regardless of who makes them. Even if your guru says this, then he must be rejected. This is Vaisnava etiquette.

The Maha-Purusa Devotees Are There For The Whole World

So hear, and take all these things in your heart. And whatever you are hearing, try to adopt it in your lives. If there is anything you are not realizing or understanding, you can ask any of the Vaisnavas to explain it, or you can come to me. I will try to help, without any discrimination on the basis of caste or creed. The maha-purusa devotees are not bound by any sectarian values or confined by any borders or walls; rather they are there for the whole world. Just as Krsna is of the whole world, so are Vaisnavas. If anyone is creating sectarianism in the name of spiritual life, then they are doing so without any reference to sadhu, sastra, or guru.

[Endnote 1: I want a revolution like this: we should come to the real path, in the real sense. Krsna will arrange for someone to come after me; and after that anyone else will come, and this will not be ruined. The world will be ruined, but this line is eternal. Srila Bhaktivinoda Thakura has said that this line is eternal. Someone from any group will come. (Srila Narayana Gosvami Maharaja, from a lecture of January 15, 2000]

Endnote 2: Performing bhajana with the inclination to serve Srimati Radhika is the best type of bhajana. It cannot be said that no one is qualified to perform this kind of bhajana. In this world there is always a rupanuga Vaisnava who is capable of doing such bhajana. Past, present, and future - there will always be someone with this qualification. To say otherwise is incorrect because the world would face destruction if it lacked the presence of such a qualified person. (translated by the Rays of the Harmonist team, “Jewels from the Ocean of Separation,” by Srila Narayana Gosvami Maharaja in glorification of Srila Bhaktivedanta Vamana Gosvami Maharaja, Kartika, 2005]